Ontario public schools to shut down starting Feb. 21 due to teacher strikes

The four largest education unions in Ontario are planning on striking starting Feb. 1—a shutdown that will cause a full shut down of Ontario’s education system. 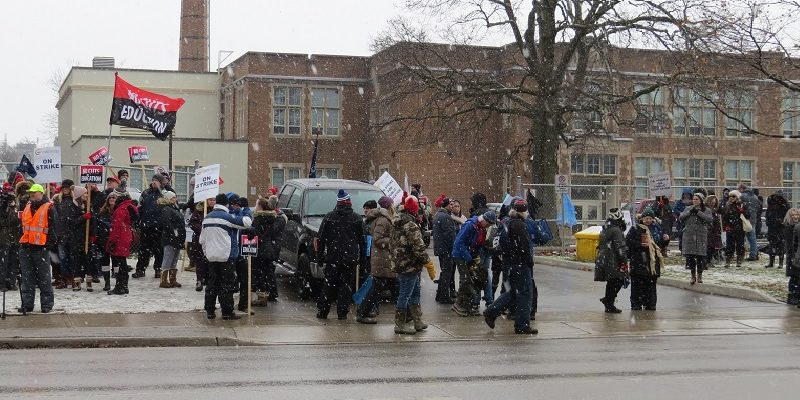 The four largest education unions of Ontario are planning on striking starting Feb. 21—a shutdown that will cause a full shut down of Ontario’s public education system.

Those four unions represent over 200,000 teachers province-wide across over 5,000 schools. The strike will result in the absence of education for nearly 2,000,000 students starting Feb. 21.

The event was heavily picketed by some of those 200,000 outside the Royal York Hotel.

AEFO president Remi Sabourin told Global that “It is clear to all four Ontario education unions and our members that the Ford government and Education Minister Lecce care nothing about students or educators and everything about taking money out of the publicly funded education system.”

A statement from ETFO president said, “Educators in every school board will not stay silent as the Ford government proceeds to decimate our publicly funded education system.”

Walkouts have already taken place amongst teachers from the four unions in the form of one-day protests. ETFO members recently took an Ontario-wide strike Tuesday, and on Wednesday, rotating strikes continued at school boards throughout the province.

As of now, the union representing French schoolboards are the only ones still at the negotiating table.

ETFO representative Hammond said that the province was close to reaching a deal with the government, but that provincial negotiators tabled a last-minute new proposal which the union declined.

The Ford government offered compensation of up to $60 a day to parents who were affected by the strike and needed child care kickbacks.