Nathan Philips Square hit capacity early on in the morning, with fans being told to watch the celebrations elsewhere. That’s when several fans began climbing the arches at the square, with police announcing over loudspeakers demanding fans climb down due to safety concerns. 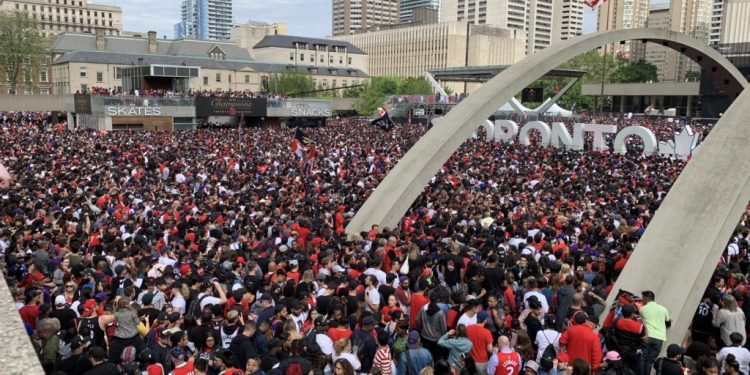 The Toronto Raptors won their first NBA championship ever, giving Canada the first reason to celebrate a major sports title in over 25 years.

Spirits are high, and the Toronto downtown core has flooded with Canadians who have flocked from across the nation. Current figures estimate that there are over two million people currently downtown, which makes the Toronto Raptors parade larger than the population of the European country Slovenia.

Of course, events of such magnitude can quickly get out of hand. Several reports have started to come in reporting overcrowding and general disorganization on the part of the city of Toronto. With Toronto not having to set up a parade in decades and the unprecedented attendance, things were bound to get somewhat out of hand.

Nathan Philips Square hit capacity early on in the morning, with fans being told to watch the celebrations elsewhere. That’s when several fans began climbing the arches at the square, with police announcing over loudspeakers demanding fans climb down due to safety concerns.

Toronto Police, fire, and ambulance have also set up a medical post due to reports of dehydration, as it’s a sunny day in the city.

According to tweets from the TTC Services Alert, some fans were climbing TTC infrastructure, forcing the city to cut power to several lines out of safety concerns.

More photos are beginning to emerge online of fans climbing buses, causing delays across the city.

The Toronto Police have tweeted suggestions to fans, telling them to head to viewing screens “if you  are feeling too crowded”

Considering the number of people at the parade totals to just under 2 percent of Canada’s entire population, things are not as bad as they could be, though things seem to be continually slipping into more and more madness.

According to a tweet from Global News, people are now ditching their vehicles on the Gardiner Expressway to watch the Raptors celebrate.

The Raptors have even gotten praise from a team that knows a bit about winning, the rival Golden State Warriors.

The Warriors made the all-class move to take out a page in the Toronto Star, congratulating the Raptors for their victory in the hard-fought six-game series.

This article will be updated as more information becomes available.