A press release said, "Pelosi is leading a Congressional delegation to the Indo-Pacific region, including visits to Singapore, Malaysia, South Korea and Japan." 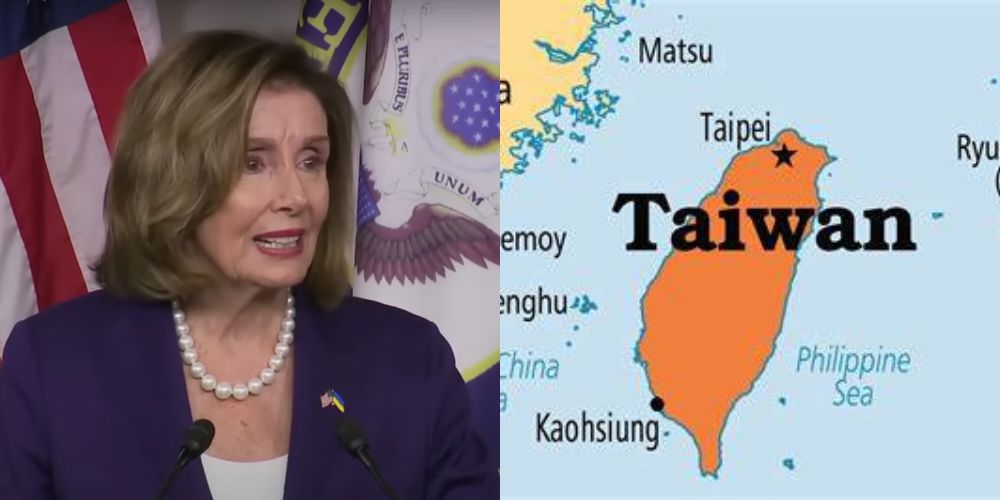 House Speaker Nancy Pelosi began her pan-Asian trip on Sunday, but at the moment there has been no talk of visiting Taiwan, with the omission coming as China increases their threats against the House Speaker and her envoy.

Pelosi's office said in a press release that "Speaker Nancy Pelosi is leading a Congressional delegation to the Indo-Pacific region, including visits to Singapore, Malaysia, South Korea and Japan," but there was no mention of Taiwan on her agenda. "The trip will focus on mutual security, economic partnership and democratic governance in the Indo-Pacific region," the press release read.

"Today, our Congressional delegation travels to the Indo-Pacific to reaffirm America’s strong and unshakeable commitment to our allies and friends in the region," Pelosi said.  "In Singapore, Malaysia, South Korea and Japan, our delegation will hold high-level meetings to discuss how we can further advance our shared interests and values, including peace and security, economic growth and trade, the COVID-19 pandemic, the climate crisis, human rights and democratic governance.  Under the strong leadership of President Biden, America is firmly committed to smart, strategic engagement in the region, understanding that a free and flourishing Indo-Pacific is crucial to prosperity in our nation and around the globe."

The press release stated that Pelosi and her envoy made a stop in Hawaii for fuel and to visit both the Pearl Harbor Memorial and the USS Arizona, and received a briefing from United States Indo-Pacific Command leadership.

Traveling with Pelosi on this trip to the Indo-Pacific are Reps. Gregory Meeks, Mark Takano, Suzan DelBene, Raja Krishnamoorthi, and Andy Kim.

Pelosi was originally going to make the trip, including traveling to Taiwan, in April, but postponed the trip indefinitely after receiving a positive Covid-19 test.

The ambiguity of whether she will visit the self-governed country comes after heated discourse between American and China. According to Reuters, through the "One China" policy, the communist country maintains Taiwan as a part of its territory. America has said it respects that policy and does not have official diplomatic ties with Taiwan, but is bound by law to provide the means of defense for the smaller country if need be.

A contributor to Chinese state-owned media Global Times, Hu Xijin, tweeted Saturday "If Pelosi really visits Taiwan as planned, the Tsai Ing-wen authorities are accomplice. The mainland will definitely carry out severe punishment actions on Taiwan at the same time. The unbearable consequences will fall on Tsai authorities."

Xijin had tweeted similar rhetoric a day before, writing, "If US fighter jets escort Pelosi's plane into Taiwan, it is invasion. The [People's Liberation Army] has the right to forcibly dispel Pelosi's plane and the US fighter jets, including firing warning shots and making tactical movement of obstruction."

On July 26, Chinese officials said that any visit by Pelosi to Taiwan would be seen as "support" of "Taiwan independence," and that Beijing would enforce "resolute and forceful measures" as a response. Chinese foreign ministry spokesman Zhao Lijian said at a press conference, "If the US pushes ahead and challenges China's bottom line... the US side will bear all the consequences arising therefrom."

China's defense ministry spokesman Tan Kefei said, "The Chinese military will not turn a blind eye to it, and will respond by taking strong measures to thwart any external interference."

While foreign travel by senior US officials would always require additional security, Pelosi’s Taiwan visit would require security precautions far beyond those required for trips to less risky destinations.

On a July 27 phone call Chinese President Xi Jinping told Joe Biden that "Those who play with fire will only get burnt," over Pelosi's scheduled visit. The Chinese leader said that he hoped Biden and American leadership would see the issue "clearly."

The USS Ronald Reagan, an aircraft carrier, and its strike group returned to the South China Sea by July 28 while the Chinese military ramped up military exercises in the vicinity.

A visit from Pelosi to Taiwan would mark the highest ranking US elected official to visit the island since 1997.