"This is what happens when women try to speak up for our sex-based rights," said event organizer Amy Sousa. 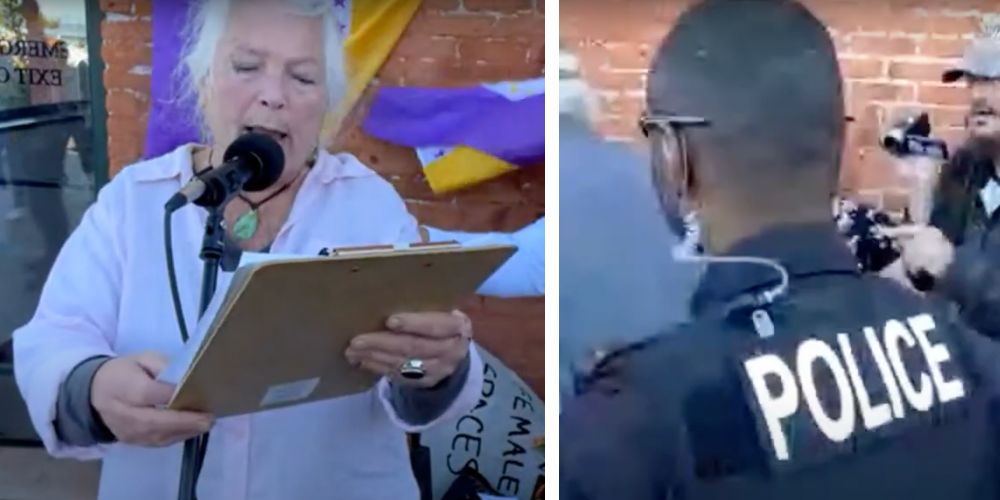 On Monday evening, members of the public gathered outside the Port Townsend, Washington City Hall to voice their concerns in regards to the city’s response in the case of an 80-year-old grandmother who was banned from the local YMCA pool for expressing her discomfort with having a transgender woman in the changing room as she and children were using the facilities, and were met with trans rights activist protestors who tried to disrupt the event before being ushered away by officers.

The press conference, titled "Let Julie Swim," was held across the street from city hall in Pope Marine Park, starting just before the city council was set to hear public comments regarding Mayor David J. Faber’s transgender proclamation. In response to the protest, the mayor doubled down on his support for trans access to women's changing rooms over women's rights to private spaces.

"What an incredible night," he said. "The Port Townsend community showed up in huge and beautiful fashion to say that hate has no place here. Trans and cis-allies alike spoke love & support, and the only TERF speaker was from out of town. Tonight reminded me why Port Townsend is home."

In response, women who stand for women pushed back, showing what they were really up against.

The proclamation reads in part: "the City of Port Townsend values our transgender residents and visitors and urges all residents and visitors to be respectful, welcoming, and kind to everyone regardless of gender identity. I further proclaim that discrimination and prejudice, in any form, especially against transgender people, are unwelcome and have no place in the City of Port Townsend."

The press conference featured a number of speakers, including 80-year-old Julie Jaman herself, the woman at the center of the incident. She was interrupted when trans activists attempted to drown out the group of concerned citizens, shouting "trans rights are human rights" and "trans women are women," and at one point were seen pushing their way behind where the speakers were, carrying the pride flag as well as signs.

After audio and video of the livestream cut, one person is heard yelling, "where’s our police to help serve and protect? They [the protestors] are attacking my equipment."

Minutes later, police were seen walking up to where the speakers were, and began ushering the trans rights activists away from the podium.

Speaking of the protestors, women’s rights activist and event organizer Amy Sousa said, "they are stealing people’s shoes, they tried to steal my phone, they stole Jen Thomas’ shoe, they are touching women, you can see it on camera, they are touching us."

"This is what happens when women try to speak up for our sex-based rights," she continued.

A man who followed after Sousa said, "take a look around, ask yourself, which side of this issue supports free speech and your right to be heard, and which side  supports censorship and shutting down discussion."

The Monday night press conference included speakers from all walks of life who expressed their support of Jaman, and their disdain of the YMCA as well as the city for supporting Jaman’s ban.

"We are here in support of Julie Jaman, an 80-year-old woman who was banned from the YMCA for standing up for her own instincts, for self protection, for standing up for women and girls," Sousa began, standing in front of flags associated with the Women’s Suffrage movement of the early 20th century.

"I am here today as a women's rights activist, as a rape survivor, as a friend to Julie, and as an advocate for all women and girls. I am here to speak for the sex based rights of women and girls as fully embodied whole human beings," she continued. "we deserve respect for our sex and boundaries. Around our bodies. We deserve to center the needs of our bodies and we deserve for those needs to be taken seriously politically."

Speaking at the event, Jaman said, "here we are again, to demand respect for human rights of the female sex, again. You may have read some version of my personal experience, a naked old lady in the women's shower room, and what I saw that day."

"Wendy Bart, CEO the YMCA, told me pride posters are adequate to let people know, women know, what to expect in the shower known for 60 years as female only, One will now encounter men who identify as women, undressing and showering with the elderly," Jaman continued. "I object."

"I have been publicly humiliated, my rights have been trespassed, I am no longer allowed to swim," she said.

After protestors began to amass at the event, yelling and repeatedly touching equipment, Jaman said, "you can see why it's so necessary to have safe spaces for women."

In a press release, Jaman said, "It is unconscionable that the YMCA would instigate these new policies without clearly informing pool patrons and parents. Although, in 2021, the Y reported that they were adding family and all-gender dressing and bathing areas, they’ve not done that. Instead, they’ve usurped the binary designations… with no choices."

"The staff seems to have received little professional training on how to handle reactions to such a radical cultural change—particularly for the most vulnerable: older female patrons, and children who may be exposed to inappropriate behavior… [This ignores] the dignity and safety of unsuspecting women who have trusted…these facilities for many years," she added.

On July 26, 80-year-old Julie Jaman was banned from her local YMCA pool that she frequents after she insisted that a biological male who identifies as female leave the locker rooms where Jaman was showering, and young girls that the biological male YMCA worker had escorted to the bathroom were undressing to use the restrooms.

In a statement at the time to The Post Millennial, a YMCA Marketing and Communications Manager said that Jaman had not been permanently suspended for this incident alone, but rather due to "repeatedly violating the Olympic Peninsula YMCA code of conduct, specifically, using disrespectful words or gestures towards YMCA staff or others; and abusive, harassing and/or obscene language or gestures towards YMCA staff or others."

The manager said that the facility has experiences past issues, but that the incident in the changing room was "unforgivable and extremely harmful," and noted that there are private stalls within the restroom for those who would like additional privacy while changing.