Five of the seven arrested over the riots have been previously accused of or convicted for their role in other Black Lives Matter-Antifa riots. 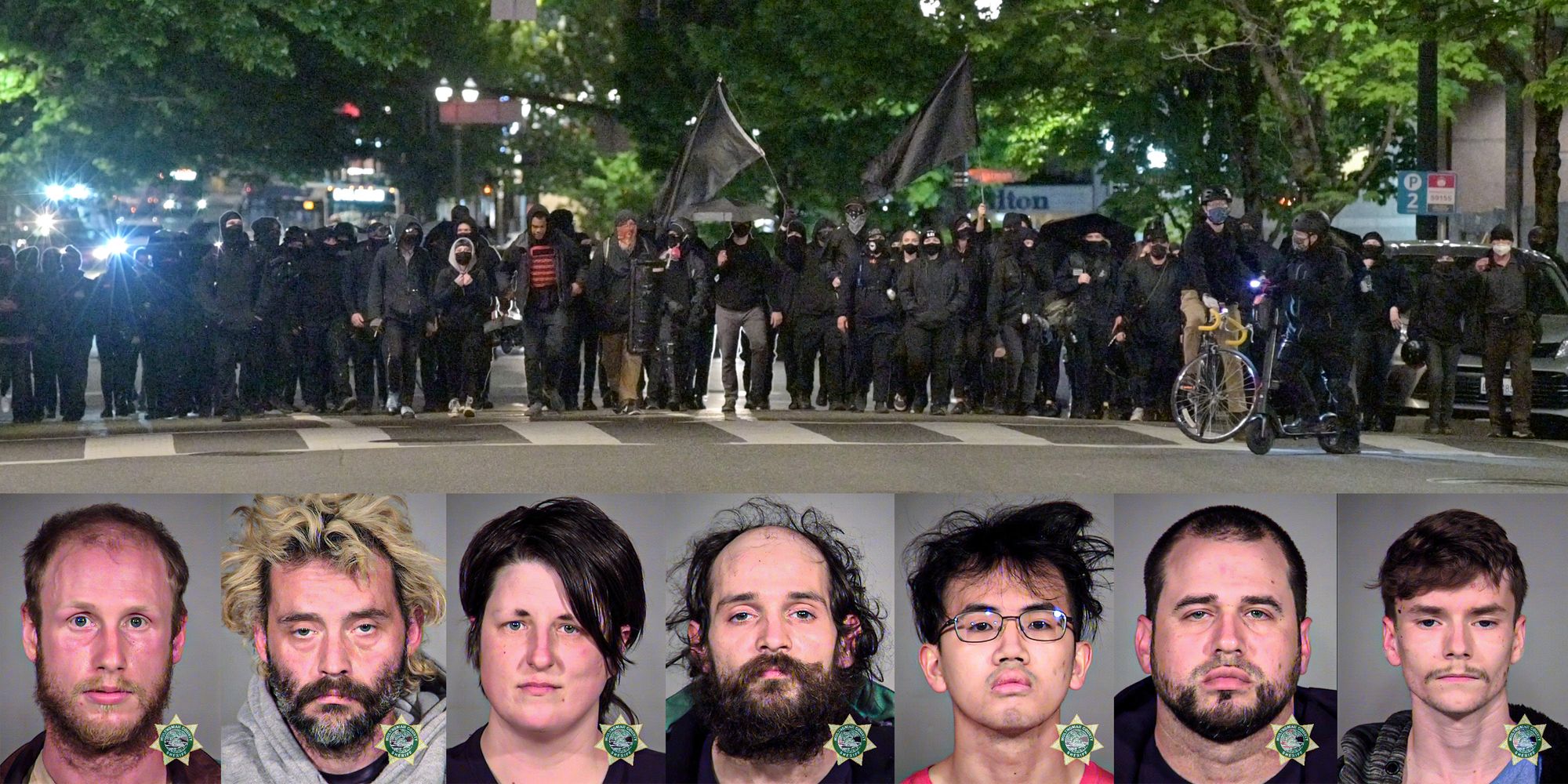 The Multnomah County District Attorney’s Office has announced it is moving forward with prosecuting three suspect rioters connected to the violent Antifa protests in Portland, Ore. on May Day.

On Saturday night, around 50 people in black bloc descended on the local Immigration and Customs Enforcement facility in a pre-announced riot. The facility is among one of many government buildings targeted and set on fire dozens of times over the past 11 months by far-left rioters. Five of the seven arrested over the riots have been previously accused of or convicted for their role in other Black Lives Matter-Antifa riots.

22-year-old Jeremiah Day, of Portland, allegedly brandished a butterfly knife at an officer before re-approaching police after taking cover behind an umbrella, according to court documents. He then allegedly tried fleeing on foot before being caught and arrested. He was originally charged with seven counts of menacing officers with the knife, felony unlawful use of a weapon, resisting arrest, felony riot and interfering with a peace officer. Despite the 11 offenses, Day was quickly released without bail. The district attorney’s office dropped six of Day’s menacing counts but is proceeding with the other more serious charges.

Around the same time as the riot outside the ICE facility, a group of around a hundred Antifa carrying riot gear marched through downtown. They shut down traffic and vandalized businesses and property. Portland Police declared a riot.

Phoebe Anne Loomis, 37, of Portland, was arrested for felony first-degree criminal mischief. Though quickly released without bail, she has since been charged by the district attorney’s office with felony riot plus two more felony criminal mischief charges. The Post Millennial can report that Loomis is a core member in Portland’s Antifa scene. She was arrested carrying a helmet, gloves, a metal bar, pepper spray and a gas mask. Loomis, who has an Antifa gang tattoo on her chest, was previously convicted over her role at another May Day riot back in 2017.

The third suspect charged by the district attorney’s office is Quang Thien Nguyen, of Kent, Wash. The 20-year-old is charged with felony first-degree criminal mischief and two counts of first-degree attempted criminal mischief. Felony riot has since been added to the slew of charges. A hammer and sling shot were seized from Nguyen, and he was quickly bailed out. He was also found to be carrying a booklet titled, “How to make a sling.” The booklet was given out at an Antifa May Day zine fair earlier in the day at Peninsula Park.

This isn’t the first time Nguyen has been accused of violent criminal behavior at an Antifa riot. He was arrested at a riot last November in Seattle for failure to disperse, pedestrian interference and obstruction, but those charges were dropped.

Portland Police also made two arrests of suspects at the riots who had outstanding warrants.

Kristopher Michael Donnelly, 27, of Kelso, Wash., was arrested for felony riot, felony first-degree criminal mischief and resisting arrest. He was quickly bailed out. A repeat accused offender, Donnelly was arrested at least five times at riots in 2020. He was given a conditional pretrial release on his federal felony civil disorder case, which he appears to have violated.

Darren Ray Stephens, 36, of Portland, was arrested for second-degree criminal mischief, unlawful applying of graffiti and unlawful possession of a graffiti implement. He was quickly released without bail. Stephens was arrested last year at another riot in June and charged with felony second-degree burglary, two counts of felony first-degree theft, felony riot and providing police with false information. His next court date for both incidents is scheduled for May 21.

In addition to the five arrested at the evening May Day riots, three others have been charged over a protest-related altercation in the street that occurred earlier in the day.

Charles Ernest Stubbs, 42, was recorded brandishing a knife and threatening to slit a counter-protester’s throat and mutilate his genitals. He was arrested on Monday and charged with two felony counts of unlawful use of a weapon, menacing and disorderly conduct. He was quickly bailed out.

Stubbs, a Juggalo who is a regular at Antifa riots in Portland, was arrested at the Red House Autonomous Zone (RHAZ) last year for second-degree trespassing and felony possession of body armor. Those charges were dropped.

Randy A. Graves, 32, was also recorded at the incident threatening the same man, Michael Isaacs. Graves was arrested on Monday and is charged with menacing and second-degree disorderly conduct. He was quickly bailed out. Graves has a pending case over an incident where he is accused of threatening park rangers with an axe.

Michael Isaacs, the bat-wielding counter-protester who was threatened in the street, was also arrested. His case has been referred back to police for additional investigative follow-up, according to the district attorney’s office.