Portlanders desperately try to sell off homes taken over by squatters

"Unfortunately there are squatters on the property and seller does not have resources to remove them and is willing to negotiate the price for a buyer to take the risk of closing." 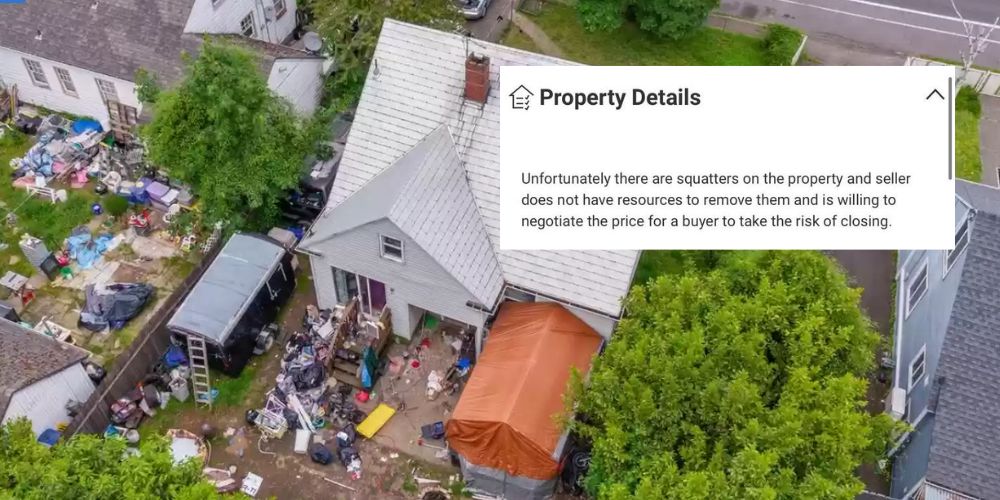 A two bedroom, three bathroom single family home has been placed on the market in Portland’s Southeast neighborhood for $330,000.

There’s a catch though. The buyer that ultimately ends up purchasing the home will be tasked with removing squatters that have taken over the property.

The home, placed for sale on Realtor.com, features photos only of the outside of the house, which sits at 5256 SE Flavel St. These exterior photos show copious amounts of trash strewn around the backyard, as well as numerous broken cars in the driveway.

"Unfortunately there are squatters on the property and seller does not have resources to remove them and is willing to negotiate the price for a buyer to take the risk of closing," the house’s listing reads on Realtor.com.

The neighborhood has reportedly become a hub of homeless people taking advantage of vacant homes, with neighbors saying that they now live in fear for their safety.

According to KGW8, neighbors have begun barricading unused doors in their houses, investing in security systems, and buying things like baseball bats intended for self protection.

"It’s unbearable to watch your whole city become a dumpster fire," said Annette Benedetti, who lives near homes on Southeast 67th Avenue that have sat abandoned and have since had numerous homeless people move in, with RVs lining the streets.

In early July, Benedetti said that 16 homeless people had moved into the neighborhood.

"It’s a living nightmare," added Dustin Shannon, another neighbor who has lived there for 19 years. "There’s no peace of mind, there is no sleeping well at night — every little noise, I’m jumpy."

Shannon’s backyard is next to one of these Southeast Portland vacant homes, and he frequently picks up needles and trash from a path that runs behind his house, an area that he no longer lets his grandson play in.

"It just gets worse and worse by the day, more and more of them are showing up," he said. "Stolen cars are showing up, they’ve got a pile of garbage out back that is taller than me."

Both Benedetti and Shannon describe violence and shootings in the area, with limited police response due to staffing shortfalls.

"We’ve barricaded our backdoor at this point, blocked it off," said Shannon. "We’re not gun proponents, but we’ve invested in that. We’ve got a security system in place and I keep a bat at both my back and front door."

Another one of these vacant homes stands at the corner of SE Division Street and 76th Avenue, just a couple miles away from Flavel st.

This property previously had homeless people living in it, and caught fire. The owner of the property had plans to remodel the home, but the plans fell through shortly before the fire.

Now, a couple lives in the run down home, with neighbors telling KATU2 that the pair scopes the neighborhood for things to take from cars and houses.

"We feel very vulnerable here because they’re so bold. We have people coming in and out of there are nighttime thieves. The one guy had all black on. Except for his white socks that were up to here. And you could see these white socks walking up and down and that’s all you could see. That’s how bold they are," said neighbor Dennis Kelley.

Another anonymous neighbor said that her house had been broken into, with expensive guitars and a camera stolen after robbers broke in through an air conditioning unit in a vacant unit next to hers.

"These were precious items we were wanting to keep for a long time, they were very important. It’s not about the money, it’s about what they took," she said.

A group of neighbors later decided to break into vacant home to recover their belongings, and were shocked at the state of the house.

"We went in. It’s filthy. There’s human waste in the closets, there’s pornography, there’s drug paraphernalia, there’s torn out siding, doors propped against windows where the fire has burned through. (Another neighbor) found his bag, he found his wallet and a few other things, and we found a metal Columbian tin that was in my husband’s top desk. Proof that they were in there and that’s where they went after the burglary," the neighbor told KATU2.

This property has reportedly been for sale for a while, with little interest from buyers.

"So this is an ongoing issue. And I just want to have the thing razed. I want to have the property developed into something. Maybe the local Asian community or APANO can turn it into a garden or a community space or something along those lines," one neighbor said.

Another home, located at the corner of SE Division St and SE 154 Avenue, faced a similar fate, with squatters reportedly setting fire to the living room, according to a Redfin.com posting.

"Squatters caused a fire in downstairs bed and living room. Trash inside home. Squatters now removed. Sellers are selling AS-IS and price is adjusted for that. RM1-Buyer to verify zoning and schools, buyer to do due diligence. Corner lot allows for duplex and possibly triplex. Tear down and build single family, multi-family or restore current home. Major smoke damage through-out. Interior viewing with accepted offer. Ok to drive by and walk around," the posting read.

Another home outside of Portland and Oregon City was listed earlier this year and sold for $180,000, complete with"squatters in the barn," according to a Zillow listing.

Another one of these situations came in the form of the "Red House" an autonomous "eviction blockade."

According to the Oregonian, a developer bought the home at a foreclosure auction in 2018, but the family remained inside the home, with far-left activists barricading the property and attacking officers who attempted to clear it.

In late 2020, an apparent deal had reportedly been struck, but according to a February 2021 article by the Oregonian, that deal never materialized.

As the property lies in limbo, people in the neighborhood have reported increased cases of harassment, vandalism and threats, with some neighbors reporting finding human waste on their property.

The Kinneys, who lived at the property for decades before losing it to foreclosure for failing to pay their mortgage for a year and a half, no longer appear to be living at the property, but visit regularly.

Instead, activists and homeless people have appeared to takeover the home and the neighboring empty lot, with tents being erected.