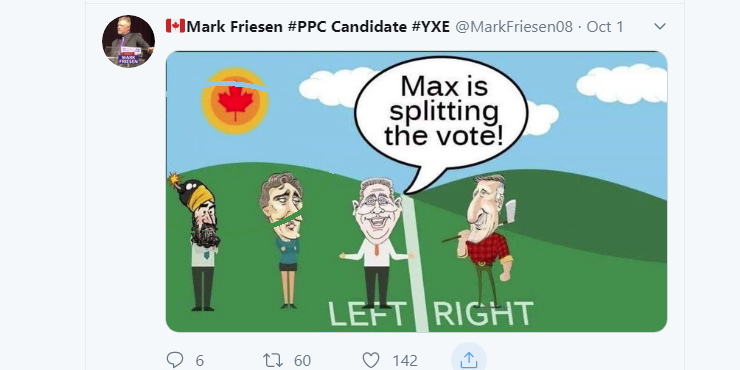 Mark Friesen told the CBC that the situation chalks up to a misinterpretation.

“I explained this to a few of the people that are calling me a racist now: I didn’t realize there was a bomb in Singh’s turban,” Friesen said Thursday to the CBC. “If you just look at it, it just looks like a tuque, right?”

The comic shows People’s Party Leader Maxime Bernier, Prime Minister Justin Trudeau Conservative Party Leader Andrew Scheer, and New Democrat Leader Jagmeet Singh, all in a field, with a line drawn across separating the three from Maxime Bernier, being the only figure on the “right” side.

Singh can be seen wearing a turban with a black powder bomb with its wick ignited in it.

“This cartoon is obviously unacceptable,” a spokesperson for the Singh campaign team said to CBC.

Rob Lussier, who is running under the PPC banner in the Manitoba riding of Brandon-Souris, also retweeted the cartoon two weeks prior, but told the CBC he doesn’t remember doing so.

“I don’t remember the cartoon. I could have just shared it without even thinking about that,” Lussier said. “I’m usually quite attuned to that kind of thing because I’m a minority myself. Being a Métis and a gay person myself, I get a lot of hate and threats.”

The PPC Candidate in Saskatchewan says, though, that he will keep the post up on his Twitter because it alludes to Jagmeet Singh’s reluctance to disavow Sikh terrorism.