President of Brazil asks Twitter: “What is a golden shower?”

Apparently the president of Brazil is dying to find out. 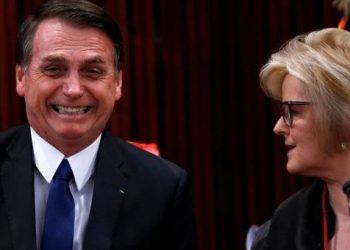 The recently elected President of Brazil, Jair Bolsonaro took to Twitter to ask a burning question.

“What is a golden shower?” Bolsonaro asked his 3.51 million followers.

Apparently the president of Brazil is dying to find out.

The tweet which was shared widely across the platform generated nearly 100,000 likes and 27,000 comments.

For those of our readers that don’t know, a “golden shower” is an unusual sexual practice that involves being urinated on by one or two individuals.

The president’s comments came shortly after he shared an explicit video which depicted two men urinating on each other at a Brazilian festival.

“We have to expose the truth to the population to have knowledge and  always take their priorities. This is what has turned many blocks of  street in the Brazilian carnival,” asked Bolsonaro in his tweet.

Bolsonaro been know for his controversial social views which have been condemned as homophobic, misogynistic and racist by the mainstream media.

Jair Bolsonaro was elected on a populist ticket by 55.3% of the population and was sworn in on January 1st, 2019.