Weingarten's faulty claim was in response to a clip of Florida Gov. Ron DeSantis in which he asserted that "It was the American Revolution that caused people to question slavery. 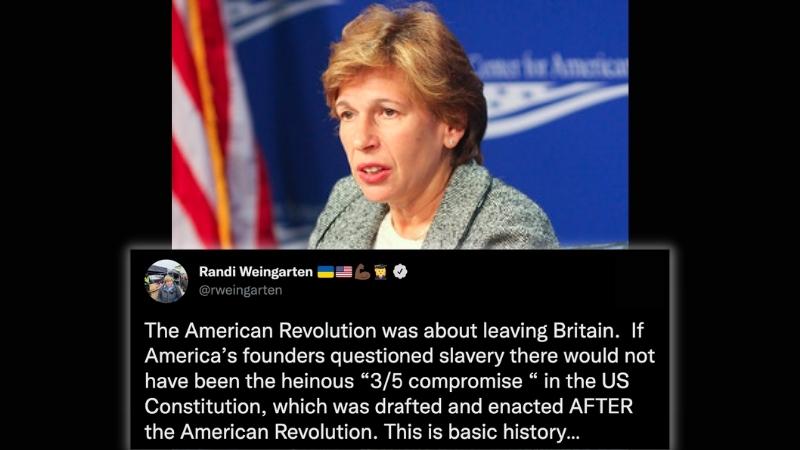 Olivia Rondeau
Sep 28, 2022 minute read
ADVERTISEMENT
ADVERTISEMENT
Randi Weingarten, the progressive president of the second-largest teacher's union in the country and a former history teacher, displayed her lack of historical knowledge on Wednesday when she falsely claimed that "if America’s founders questioned slavery" the three-fifths compromise wouldn't have been added to the US Constitution.

Weingarten's faulty claim was in response to a clip of Florida Gov. Ron DeSantis in which he asserted that "It was the American Revolution that caused people to question slavery. No one had questioned it before we decided as Americans that we are endowed by our creator with unalienable rights."

The three-fifths compromise refers to an agreement between delegates from the Northern and Southern states at the 1787 US Constitutional Convention. The slave-owning southern states wanted to count all those they enslaved towards electoral representation in Congress, while the non-slave states argued that this gave the southerners an unfair representation in the House, according to Harvard University's Perspectives of Change project.

The agreement ended up being a give-and-take for both sides, as the Founding Fathers settled on three out of every five enslaved individuals counting towards the electorate. Without pushback from the Northern states, slave owners would've had a significantly larger pull in the House of Representatives, as the voted of those they enslaved were not their own, but the master's opinions.

Though this historical fact is proof enough that the founders "questioned slavery," many Twitter users – who were unable to directly reply to Weingarten's post due to her shutting the comments off – chimed in with quote-tweets pointing out that Thomas Jefferson, an author of the 1776 Declaration of Independence, actually sparked a massive debate on slavery over a decade prior to the Constitution being put into practice.

An original draft of the Declaration included a harsh critique of the Trans-Atlantic slave trade, with Jefferson writing:

"[King George] has waged cruel war against human nature itself, violating its most sacred rights of life and liberty in the persons of a distant people who never offended him, captivating & carrying them into slavery in another hemisphere or to incur miserable death in their transportation thither.

"This piratical warfare, the opprobrium of infidel powers, is the warfare of the Christian King of Great Britain.  Determined to keep open a market where Men should be bought & sold, he has prostituted his negative for suppressing every legislative attempt to prohibit or restrain this execrable commerce.  And that this assemblage of horrors might want no fact of distinguished die, he is now exciting those very people to rise in arms among us, and to purchase that liberty of which he has deprived them, by murdering the people on whom he has obtruded them: thus paying off former crimes committed again the Liberties of one people, with crimes which he urges them to commit against the lives of another."

This strong anti-slavery sentiment was heavily contested amongst the delegates gathered in Philidelphia, Pennsylvania, and the passage was ultimately replaced with a more ambiguous note on King George's incitement of "domestic insurrections among us." Decades later, Jefferson blamed the change on delegates from slave states, as well as Northern delegates who represented merchants who were involved in the slave trade, according to BlackPast.org.

All in all, Weingarten is just wrong. It was actually the anti-slavery side who argued for slaves to not be counted as a full electoral vote, and slavery was already highly contested in the United States during the Revolution.

"Please don't tell me you're a history teacher," school choice advocate Corey DeAngelis tweeted in response to Weingarten, who was one of the leading voices for school closures due to Covid-19. It turned out that Weingarten was, in fact, a US History teacher.