The angry protester shoved his face about one inch from Hernandez and growled, "I f*cking love killing babies," before assaulting the female camera woman, Savanah Hernandez. 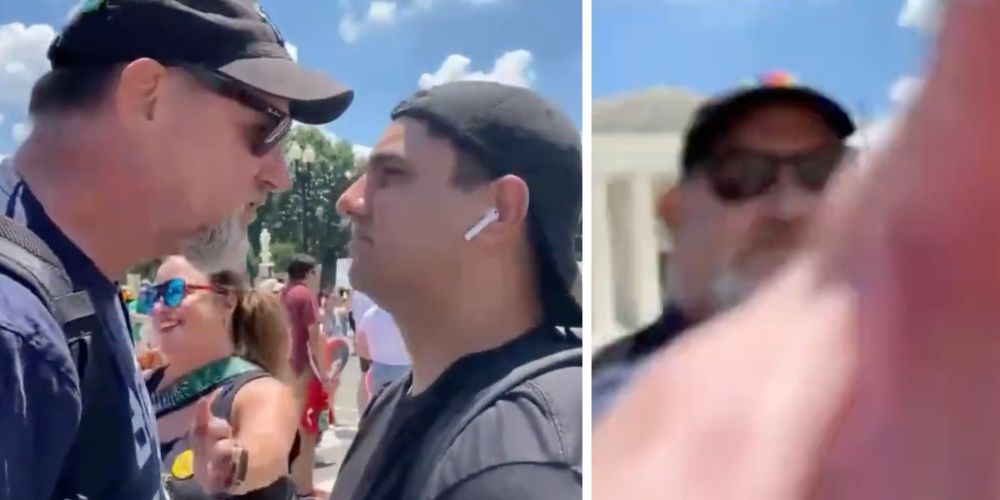 The angry protester shoved his face about one inch from Hernandez and growled, "I f*cking love killing babies," before assaulting the female camera woman and independent journalist Savanah Hernandez.

In a video posted to Twitter, Hernandez can be heard repeatedly asking the man to calm down and saying "let’s have a conversation."

"No, let’s not have a f*cking conversation you worthless little bag of sh*t," the man responds, just inches from Hernandez’s face.

As the man walks away, Hernandez jokes, "I guess the pandemic is over," causing the man to return and once again shove his face into Hernandez’s.

At this point, the man acknowledges, "I f*cking love killing babies," and adds, "you little f*cking psycho."

At the end of the video, the man aggressively pushes the camera out of camerawoman Savanah Hernandez's hands. She's clearly hit, as the camera swings out of focus.

The incident comes as the Department of Homeland Security released a memo on Friday warning about terrorist threats originating from far-left, pro-abortion radicals.

Protests have already coalesced into violence. Hours after the Supreme Court's decision to overturn Roe v Wade, which legalized abortion nationwide, a pro-life counter protestor was pepper sprayed and tackled to the ground by a pro-abortion fanatic in Seattle.

In Los Angeles, an Antifa member sprayed a homemade flamethrower at officers at a pro-abortion riot in the city.