A sheriff's deputy inside the building heard the woman screaming and was able to help. Jory was naked when he was found inside the bathroom after the alleged assault. 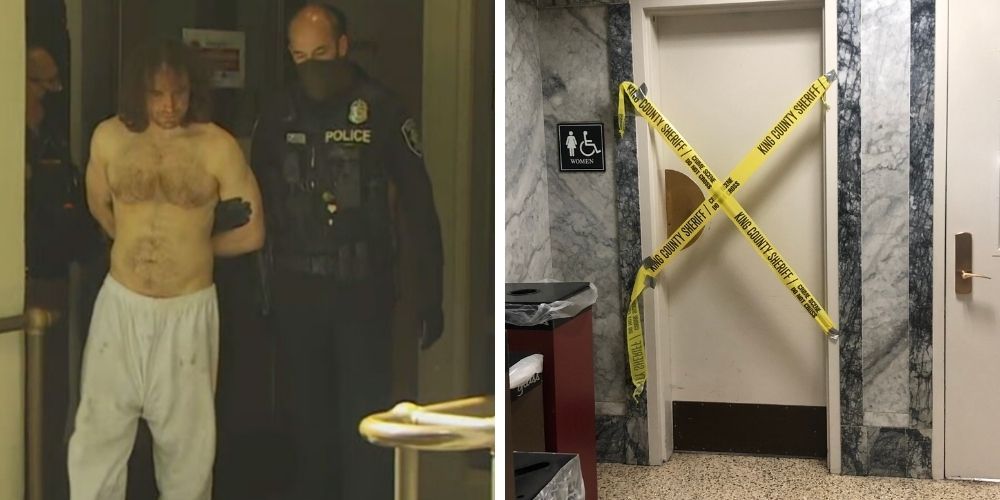 A prolific offender meth addict is in custody after allegedly sexually assaulting a county employee inside a women's bathroom at the King County courthouse Thursday morning. This follows a series of violent incidents resulting from a notorious homeless encampment next to the courthouse.

According to police, Clint James Jory, 35, was booked into King County Jail and is under investigation for attempted rape. The woman is an employee in the Department of Public Defense.

According to KOMO News, Jory was naked when he was found inside the bathroom after the alleged assault. According to police, the man entered the courthouse before the attack without issue.

A sheriff's deputy inside the building heard the woman screaming and was able to help. The entrance to the women's bathroom was sealed with crime scene tape.

According to the Burien Voice, Jory was convicted of indecent liberties two years ago and is a prolific offender who was arrested in 2019 for burglary while living in a Department of Emergency Services (DESC) facility. DESC has been heavily criticized for failing to address the root causes of homelessness including mental health, substance abuse and addiction. The area surrounding their facilities in downtown Seattle have been magnets for crime. A video obtained by The Post Millennial shows the horrid living conditions inside the building itself.

Jory was released from jail last week. His family told KOMO News that they have repeatedly tried to get him help, fearing he is a danger to himself and others. His father told KOMO that Jory is mentally ill with an official diagnosis of schizophrenia with auditory hallucinations and a methamphetamine addict.

King County Sheriff’s Sergeant, Tim Meyer confirmed that Jory registered as a sex offender on July 28 after his prior jail release. Jory listed "transient" as his place of residence. Jory is a Level 1 (the lowest level) sex offender based on his prior indecent liberties adjudication. Meyer says its undetermined if Jory had a risk assessment completed based on his registration this week.

It is unclear at this time if Jory was a resident of the notorious homeless encampment next to the King County Courthouse in Courthouse Park in downtown Seattle.

In June, a homeless man from the encampment with multiple priors, allegedly assaulted a 67-year-old man and kicked his dog to death, was released by a King County Judge. The suspect is now facing felony charges in connection to the incident after being re-arrested.

Also in June, a man from who had recently moved to Seattle from Louisiana was fatally stabbed at the encampment.

Courthouse workers claim there are 3-5 attacks on employees a week. King County Judges recently wrote a letter begging for the city's help in addressing the safety conditions of the encampment

Dunn also wants the building closed to anyone except for workers or those who have legitimate needs for going inside.

"Today's sexual assault of an employee inside the King County Courthouse in Seattle is a testament to how unsafe not only City Hall Park has become, but the courthouse itself. We can no longer ignore or defer the dangerous environment that has surrounded our seat of government, and those who attempt to access our services."