Trump wrote, "The Absentee Ballot Situation in Detroit is REALLY BAD. People are showing up to Vote only to be told, 'sorry, you have already voted.' This is happening in large numbers, elsewhere as well. Protest, Protest, Protest!" 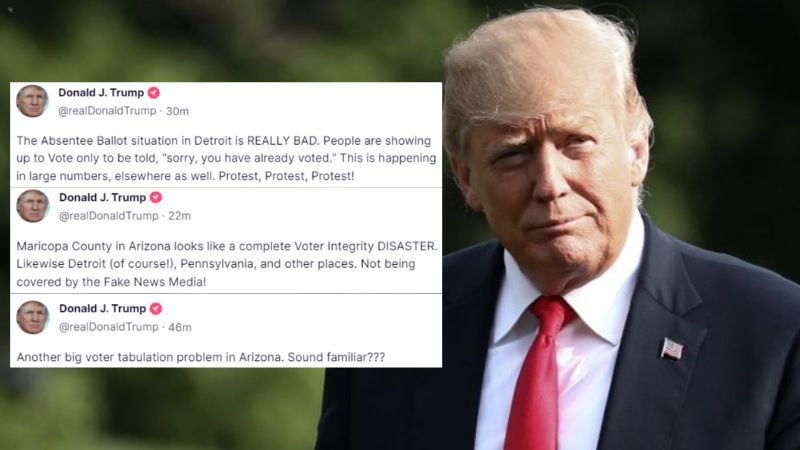 Former President Donald Trump highlighted several of the reported midterm voting irregularities Tuesday on his social media platform, Truth Social, noting that the situation is so bad in Detroit it warrants protest.

Trump wrote, "The Absentee Ballot Situation in Detroit is REALLY BAD. People are showing up to Vote only to be told, 'sorry, you have already voted.' This is happening in large numbers, elsewhere as well. Protest, Protest, Protest!"


"Another big voter tabulation problem in Arizona. Sound familiar???" Trump wrote, along with, "Maricopa County in Arizona looks like a complete Voter Integrity DISASTER. Likewise Detroit (of course!), Pennsylvania, and other places. Not being covered by the Fake News Media!"

Since the early morning hours of Election Day, voters have experienced issues with Maricopa County's tabulator machines, with one polling worker revealing that around 25 percent of ballots were being rejected. Another polling worker at a different location revealed that "nothing" had been working in the previous 30 minutes.

Across the county in Phoenix, poll workers at the Burton Barr Library revealed similar issues with their tabulators, according to ABC15 reporter Amelia Fabiano.

"Pennsylvania just announced that it would take days to determine the winner. This is outrageous," Trump wrote.

John Fetterman, the Democratic candidate running for the Pennsylvania Senate, warned over the weekend that the election-reporting process could be delayed by a while and to "buckle up" for a long week ahead. Fetterman also lashed out at many Republicans whom he claimed would try to delegitimize the results.

During a White House press briefing on Monday, Press Secretary Karine Jean-Pierre said that "We may not know all the winners of elections for a few days."

On Sunday's episode of Meet the Press host Chuck Todd told his audience to expect delays in the results from Tuesday's midterms as many of the battleground states will not have their votes tallied until well past the November 8.
ADVERTISEMENT
ADVERTISEMENT
TrumpProtests