'You stole the election': Protestor ejected from Biden rally in Maryland

"The whole notion of 'burn it all down' MAGA Republicans continues to be a drum beat..." Biden said, when the man yelled, "You stole the election!" 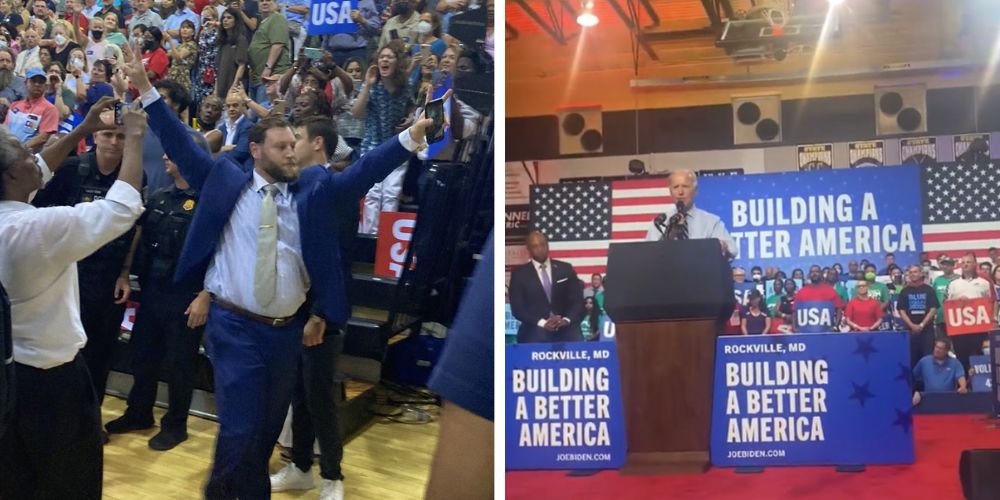 President Joe Biden was heckled at a campaign rally in Rockville, Maryland Thursday evening by a man who yelled, "You stole the election!"

Biden took a break from his most recent vacation to attend the rally in the gymnasium of Richard Montgomery High School in the suburb of Washington DC. Candidates at the event included Maryland Democratic gubernatorial nominee Wes Moore.

Biden was in the middle of his remarks and was interrupted while saying, "The whole notion of 'burn it all down' MAGA Republicans continues to be a drum beat..." when the man yelled, "You stole the election!"

As the Democratic faithful at the rally began to boo the man added, "You're a pedophile too!" Video then showed the protester being removed from the rally.

Biden replied to the heckler by addressing the crowd after the man was removed saying, "Folks, ignorance knows no boundaries."

Earlier in the day Biden spoke at a fundraiser in nearby Bethesda, Maryland, and accused former President Donald Trump and his supporters of "semi-fascism."

Biden said at the event hosted by the Democratic National Committee (DNC), "What we’re seeing now is either the beginning or the death knell of an extreme MAGA philosophy. It’s not just Trump, it’s the entire philosophy that underpins the — I’m going to say something, it’s like semi-fascism."

"This is not your father’s Republican Party. This is a different deal," he added. "Our team has to show up and quite frankly vote, just simply vote."

According to a DNC official, the 100 attendees helped raise $1 million for the committee and the Democratic Grassroots Victory Fund.

Biden is scheduled to return to Delaware on Friday to resume his vacation.