1,500 Orthodox rabbis have called on Congress to rescind the appointment of Rep. Ilhan Omar, (D-MN), to vice chair of a House foreign affairs subcommittee based on her past anti-Semitic statements and behavior. 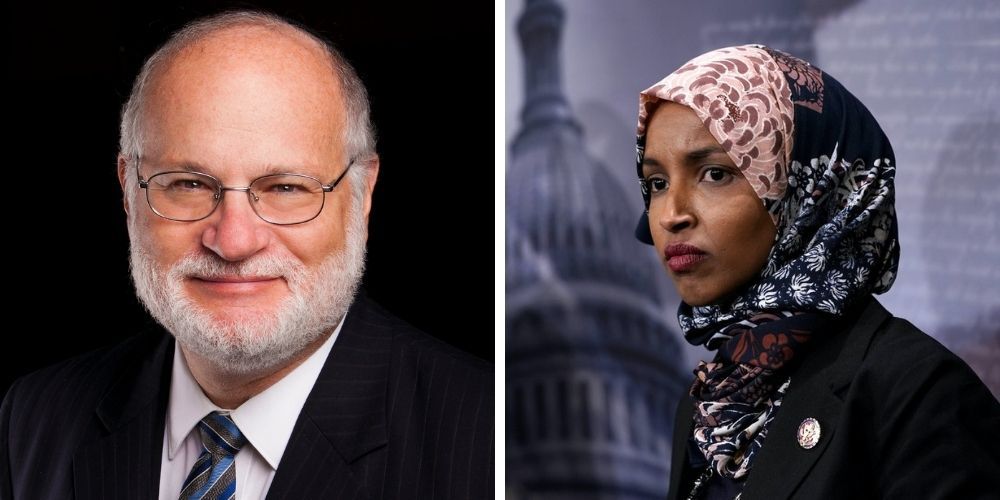 1,500 Orthodox rabbis have called on Congress to rescind the appointment of Rep. Ilhan Omar, (D-MN), to vice chair of a House foreign affairs subcommittee based on her past anti-Semitic statements and behavior.

Omar has an extensive history of anti-Semitic statements and tropes as well as promoting conspiracy theories about Jews. In a now deleted tween Omar wrote "Israel has hypnotized the world, may Allah awaken the people and help them see the evil doings of Israel. #Gaza#Palestine#Israel"

In another now deleted tweet, Omar said Jews were buying political support. "It's all about the Benjamins baby." According to the Daily Wire, in an interview earlier that year Omar suggested "that Israel should not be allowed to exist as a Jewish state, Israel is not a democracy, and compared Israel to Iran — which is the world’s leading state sponsor of terrorism." Omar also embraced the anti Semitic heads of the Woman’s March such as Linda Sarsour.

Rabbi Steven Pruzansky, the Coalition for Jewish Values's (CJV) Israel regional vice president said, "This appointment is both risible and dangerous. Ilhan Omar's long-standing hatred for Israel and contempt for Jews and for America make this a mockery of human rights advocacy. I have little doubt that she will abuse the framework of 'human rights' to further her campaign to demonize the Jewish State, as the UN Human Rights Council does on an annual basis. Rep. Omar should have been stripped of her committee assignments, rather than rewarded with a promotion."

Last week, Omar was named vice chair of the House Foreign Affairs Subcommittee on Africa, Global Health, Global Human Rights and International Organizations, a move that sparked backlash from Republicans, conservatives and Jewish groups including the  CJV, which represents over 1,500 Orthodox rabbis in matters of public policy.

The statement continued, “Earlier this month, Congressman Brian Babin (R-TX) also called for her to be removed from her committee assignments, tweeting a list of Rep. Omar’s anti-American and anti-Semitic statements. This came as House Democrats acted to remove Rep. Marjorie Taylor Greene (R-GA) from her assignments, purportedly for spreading hateful and Anti-Semitic conspiracy theories before running for office, while allowing both Rep. Omar and Rep. Tlaib (D-MI) to retain theirs despite statements made as members of Congress. The latter, as recently as last month, not merely blamed Israel after the Palestinian Authority refused to collaborate to speedily obtain and distribute COVID vaccines for its citizens, but claimed this was “proof” that Israel is “a racist state.””

CJV President Rabbi Pesach Lerner added, "The real concern is that House Democrats are treating Anti-Semitism as a political weapon, abetted by the silence and even backing of Democratic Jewish members. The action against Rep. Greene, coupled with the elevation of Rep. Omar, signals that Congress is now willing to tolerate Anti-Semitism when it is politically advantageous to do so."

Omar said in a statement last week: "Upholding basic human rights around the world is a core priority for me and the Fifth District of Minnesota. As someone who represents a large African diaspora community and is the first African-born immigrant to serve in Congress, I am particularly excited to play a leadership role in overseeing our international aid and foreign policy on the continent."

Pete Hegseth, host of Fox and Friends Weekend, called Omar’s new position  "absurd," given her past comments that have been critical of the US. "The idea that Ilhan Omar is even on the foreign affairs, foreign relations committee, is absurd. Now she’s a vice chair of a subcommittee … This is the modern-day Democrat Party – anti-Americanism writ large." Hegseth added, "We know who she is. … Her view of foreign policy is, it’s all Jewish-financed American imperialism. We’re the problem in the world."

"Minnesota welcomed her, housed her, fed her, educated her, empowered her, elevated her and then elected her," Hegseth said, "and ultimately when she sees the United States, she sees a racist, oppressive or torturous country. When she looks back at Somalia, it’s blissful. Those are her words, not mine."

"And unfortunately … her district in Minnesota has sent more of its residents to go fight with ISIS, on their side, than any other district in America. … So she’s got a little bit of a terrorism problem in her backyard that she hasn’t addressed. But you can ‘fail up’ in the United States House – and get a vice chairmanship."