Ravelry, the world’s largest online knitting community, is banning support for US president Donald Trump and his administration. The move is to ensure a space that is “inclusive of all,” the website says. 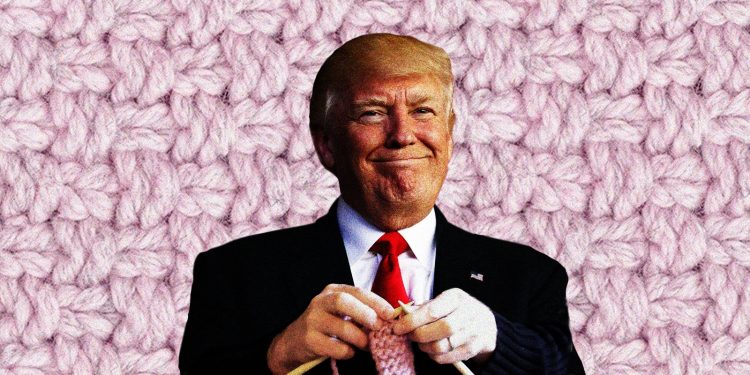 Ravelry, the world’s largest online knitting community, is banning support for US president Donald Trump and his administration. The move is to ensure a space that is “inclusive of all,” the website says in a statement:

Ravelry, which was founded in 2007 by married couple Jessica and Casey Forbes, has more than 8 million members. The ban includes patterns and posts on the website’s forums and groups, but does not include conservative views in general, according to the statement. Yet as of the time of writing, it’s perfectly fine to take an opposing view of Trump, as a quick search revealed several patterns containing the word “Trump,” including a knitted baby Trump and a “Fuck Trump” hat pattern.

At first glance, many reactions to this curb on free speech appeared largely positive among knitters, crocheters and designers in the increasingly woke  fibre arts world, with many people applauding the move. Branding people white supremacists and worse seems to be part of the course for the illiberal left these days and is a way of marking yourself out as on the “right side of history” while ducking the debate of actual political issues that might need attention.

After following the Instagram knitting community for a few months, and documenting how an increased focus on “anti-racism” and intersectional feminism have led to a call-out culture where designers and other yarn businesses have been targeted by the social justice warriors, this was no surprise. After my first article in Quillette, which focused on witch-hunts on the picture-sharing platform Instagram, I was contacted by several Ravelry users who said Forbes had a long history of censoring conservative viewpoints, and had banned several members for going against his ultra-woke agenda. I have been contacted by people who didn’t want to be named, fearing they would be targeted by social justice activists, saying they had already committed professional suicide by disagreeing with Ravelry’s ban by stating their opposition on their Instagram profiles.

There’s nothing new about Forbes et al taking drastic steps to get rid of dissidents. In her blog, Tammy, who describes herself as a Christian homemaker and knitter, tells of how a group, which supported the Republican candidate McCain ahead of the presidential election in 2008, got shut down:

A lot of people did not like us being there and eventually managed to cause enough grief that, last month, Casey shut down our group (the first and only group to ever be shut down on Ravelry) and announced that he had to do so because we, the moderators, were doing a poor job. This was a lie. (…) Needless to say we were hurt and angry, and I ended up leaving Ravelry (which you should know is almost impossible to do… and if you do get Casey to remove your account, all of your projects, stash, patterns, and posts still remain… fortunately I removed mine in advance).

Tammy writes that the group managed to set up a private board off the website, so they could keep in touch. The reaction from Forbes was the deletion of all the group members’ Ravelry accounts, which Tammy estimates to be up to about 400 people. So while Ravelry says it doesn’t endorse Democrats or ban Republicans, past actions have proven otherwise.

Forbes has been vocal recently too about what he finds unacceptable, and in January, he tweeted:

I deleted that Build the W*ll hat that was posted to @ravelry. It goes in the bin along with confederate flag patterns. I’m especially thankful for the latinx Ravelers who took the time to write me about it and I’m sorry that you had to look at that shit.

His use of language is far from what you would expect from a CEO of a large company, yet it’s fairly typical of Forbes from what I have seen so far.

Jennifer Townsend from Michigan is a knitter and academic, who’s been a Ravelry member since 2009. Things started getting increasingly political around the time of the first women’s march in 2017 when all the pussy hat patterns started popping up, she says. A libertarian, Townsend says she has never seen any instance of white supremacy on Ravelry: “I think this notion that support for Trump is white supremacy is ludicrous. The selective outrage and convenient memory loss of the progressive left is nothing short of tiresome.”  Townsend has often felt that she couldn’t express her opinions freely. “No society can function in this extremist manner. It’s a lonely and scary place to be.”

Sophia Cai, a Melbourne-based knitter, curator and writer who’s been involved in several campaigns to call out those she sees as perpetuating white supremacy, welcomed Ravelry’s stance and but re-iterated what this group of activists often refer to as threats to their safety:

@masteryarnsmith, another Instagram profile, also warned in a temporary “story” on Instagram of a backlash, including media attention from “trolls” from the right wing press, and encouraged her friends to report hate, as she feared the decision by Ravelry to ban Trump support would function as a “call to arms” for Trump supporters.

And there might be some truth in that. If the goal of Ravelry was to get rid of what they deem to be hate, white supremacy and unacceptable opinions, this move would instead do two things: reiterate to those who already agree with Forbes that they are on the side of good, and thus making them feel righteous about their opinions and values, whereas to those who oppose them politically, whether they are Trump supporters or simply not on the left, it reinforces the impression—that has some merit by now—that the Hard Left is simply banning things they don’t agree with. It has abandoned the idea that free speech is a universal good that benefit us all in the long run.

Thus, the ban on Trump support risks fuelling polarization rather than facilitating reconciliation. It also smacks of naiveity: opinions you oppose won’t disappear because you ban them, even if you ban the people who hold them. Instead, they will go elsewhere, and Ravelry risks losing advertising revenue in the process, as well as being held up as one more example of censorship and oppression of dissidents akin to what you would expect in totalitarian regimes.

Traditionally, free speech was something the Left fought for, before it became afraid of words and words came to mean “violence” if they offended, thanks to postmodern thinking that has invaded the humanities. The old German song “Die Gedanken Sind Frei” (“The thoughts are free”) was recorded by folk singer and left-wing activist Pete Seeger in 1966, and it seems hard to imagine that same song being sung today by anyone on the left.

In an article in Aero Magazine, Malhar Mali writes: “Words are not violence. We brought Western civilization through a crucible of ideological warfare to establish the norms of differentiating speech from physically harmful actions. Now some operators in the humanities want to drag us back there.”

And it seems Ravelry is doing its best to help in this sad endeavor.  Free speech isn’t just about the freedom to say whatever you want, but to allow ideas to float to the surface so that views that you disagree with can be challenged, not suppressed.

Perhaps the views of even Trump-supporting Republican knitters wouldn’t be so scary to Forbes and his comrades if free discussion was allowed.  And making the decision that supporting a democratically elected president in the land of the free constitutes white supremacy—whatever you think of him—surely is not how we tackle political differences. It’s a statement that ignores how Trump was not only supported by white people, but also by minorities that Ravelry claims to support. To be inclusive of all, as Ravelry says it aims to be, including those you disagree with surely is part of that?