RCMP investigating truck driver who went through blockade in Manitoba

An investigation is underway by the RCMP after a truck driver decided not to stop as he came to a group of protestors in Manitoba. 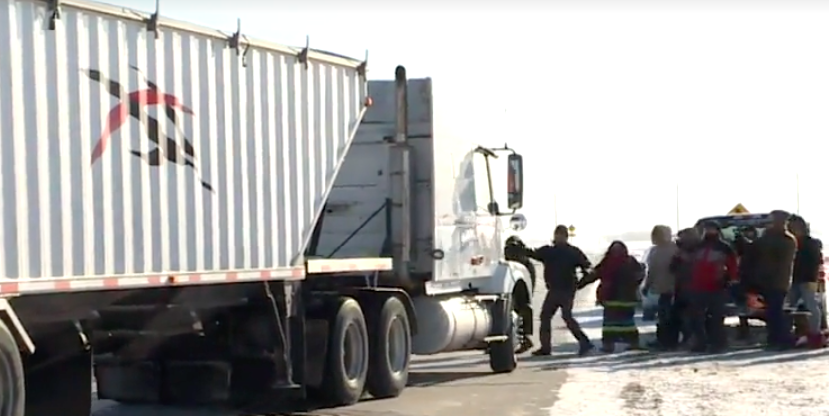 An investigation is underway by the RCMP after a truck driver decided not to stop as he came to a group of protestors. The truck allegedly hit one of the protestors who was blocking highway 75 on Monday, close to Morris, Manitoba according to Global News.

One lane was temporarily being blocked by the protestors on the highway and they were stopping semi-trailers and giving out information on treaty rights.

Footage shows a truck briefly coming to a stop and attempting to drive around the protestors blocking his way. More protesters then came from the side of the road and ran in front of the truck to stop it from passing. The driver made a turn back to the left to avoid hitting them.

“He decided just to run the blockade and try to run us over there because he was running straight for us and I stuck my hand out and my front arm, my hand caught the fender there and jarred my elbow and my shoulder there and that hurt,” said Hawkins.

The driver was later stopped by police who looked over his information before allowing him to carry on.

A Manitoba RCMP spokesperson noted that no information on potential charges will be released until after the investigation is complete.

The protest was part of the movement that has spread across the country involving many protesters who are against the construction of the $6.6 billion Coastal GasLink pipeline. The pipeline travels from the Dawson Creek area in BC to Kitimat, BC.

Agreements have been signed with all 20 elected First Nations councils along the route though some hereditary chiefs who claim the rights to the land are against the project.