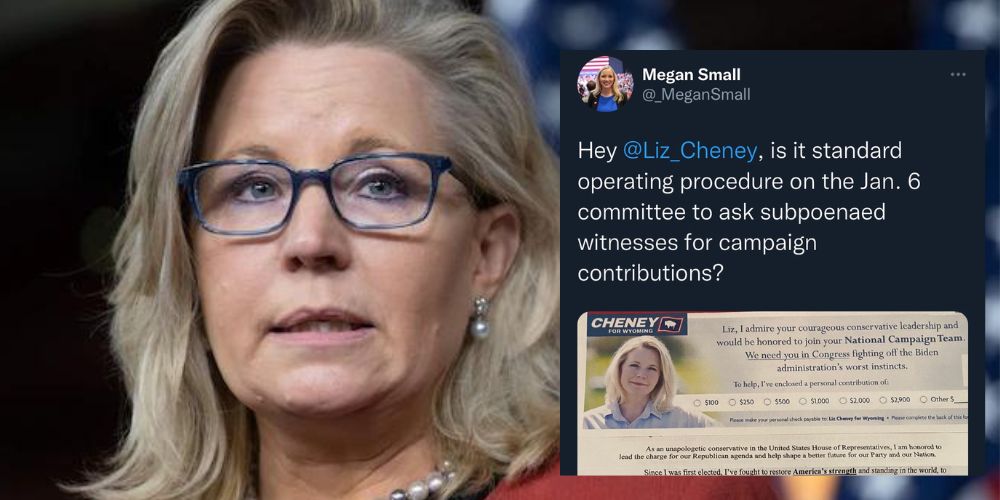 Rep. Liz Cheney (R-WY), the Vice Chair of the House January 6 committee investigating the 2021 riot at the US Capitol, is sending letters to individuals that have been subpoenaed by the committee asking for campaign contributions.

Megan Small, who served as director of operations for the Trump administration and was subpoenaed by the committee in September of last year, posted on Twitter Monday that she received a mailer from Cheney's campaign asking for donations.

"Hey @Liz_Cheney, is it standard operating procedure on the Jan. 6 committee to ask subpoenaed witnesses for campaign contributions?," Small said in a Twitter post.

"I did not step a single foot onto the grounds of the Capitol, yet for over a year I've been harassed and maligned in the press through leaks from the committee. I received my subpoena via tweet 2 days before my wedding, had to beg the committee to let me go on my honeymoon, and spent the entire day afraid of marshals showing up to serve people," Small told The Post Millennial.

"And now Liz Cheney sends me a solicitation to give her money while her committee still has the ability to refer witnesses, like me, for criminal prosecution. The goal of this committee is to scare conservatives from working in politics. It won't work on me," she added.

Cheney, alongside Adam Kinzinger, were the only two Republican representatives to vote in favor of the select committee's creation, which resulted in both of them being selected to serve on the committee.

Megan Small is one of many who have been targeted by Speaker Nancy Pelosi's (D-CA) witch hunt into the January 6 attack on the US Capitol following former President Trump's "Stop The Steal" rally. More than 100 "witnesses" have been subpoenaed and only one has ended in a DEpartment of Justice indictment, former President Donald Trump's trade adviser Peter Navarro.

Navarro was indicted earlier this month by a federal grand jury for two counts of contempt of Congress, after he refused to comply with a subpoena issued by the January 6 House Select Committee.

The committee is set to hold its first public hearing on Thursday, June 9.