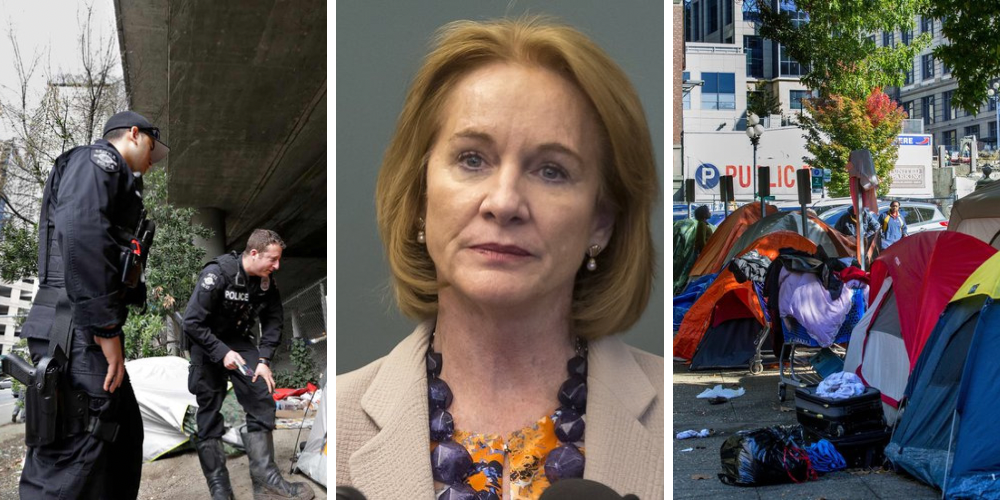 However, it has been revealed that Seattle police officers who were on the Navigation Team have been reassigned to provide personal protection for Seattle Mayor Jenny Durkan, despite a significant increase in violent crime throughout the encampments and a decrease in deployable officers citywide due to early retirements and resignations in the wake of the defund the police movement.

An uptick in protection came after Seattle city councilmember, Kshama Sawant, led an army of Antifa and Black Lives Matter activists to the Mayor's home during the 2020 George Floyd riots to pressure Durkan to further defund the police. Sawant is now facing a recall in the next election over the result of her actions, along with other violations the Washington State Supreme Court found to be credible.

Durkan originally opposed the defunding of the Navigation Team, even though she supported other police defunding measures. Recently, following the mass resignations from the police department and spiking crime including homicides, even Durkan has sounded the alarm on the critically low levels of police in the city.

The decision made by Seattle City Council to cut the Navigation Team resulted in encampments overrunning taxpayer-funded parks, schools, and sidewalks; which has resulted in citizens suffering from unsafe conditions at the hands of elected officials.

Last week, a man was shot to death near a homeless encampment in Gas Works Park, a popular area for festivals, residents and tourists. It was most recently the site of an event celebrating the expansion draft of the newest NHL franchise, The Kraken.

Earlier this month, the city of Seattle moved a deadly encampment out of Courthouse Park which was situated next to the King County Courthouse just a few blocks away from Seattle City Hall. There was frequent crime in the encampment, inside and surrounding the courthouse including homicides, attempted murders, attempted rapes.

In May, a homeless man with multiple priors, kicked a 67-year-old man's dog to death after assaulting the owner during an attempted robbery at Courthouse Park.

In addition, a couple was brutally assaulted and a man was killed after attempting to retrieve stolen belongings at an encampent in South Lake Union in July, according to Kiro 7 News.

The homeless encampents have drastically spread throughout the city due to Seattle's failed progressive policies and have resulted in decades-long annual events being cancelled over safety concerns.

The most recent casualty was cross-country meets at Lower Woodland Park in Green Lake, where thousands of runners train and compete. The city denied permits for competitions this year citing safety concerns due to the large homeless encampment situated within the park. The Green Lake homeless encampment that the city refuses to remove lies within Seattle PD's North Precinct, the same precinct that provides personal protection for Mayor Durkan.

According to KOMO News, "The city has denied permits for leagues to host meets at Lower Woodland, on the south end of Green Lake, and the ban will likely last the season."

Jim Neff, a local running coach, told The Seattle Times: "It's the mecca for cross country in Seattle. It's known everywhere as an extremely challenging course, so runners come from all over to test themselves against it."

In addition, the city of Seattle has refused to address and remove a violent homeless encampment situated at Broadview-Thompson Elementary School, despite parents fearing for the safety of their children. The school was forced to undergo lockdowns due to homeless residents entering the building. Broadview-Thompson is also under the same precinct as Mayor Durkan.

With the city's inaction, along with Seattle police officers no longer policing the encampements, the list of violence within the encampments continues to grow exponentially. Seattle residents fear for their safety, not from the pandemic, but from the area's campers.