Rhode Island's legislature passed a bill to open the first injection sites in the US to create harm reduction centers, which is another term for heroin injection sites. 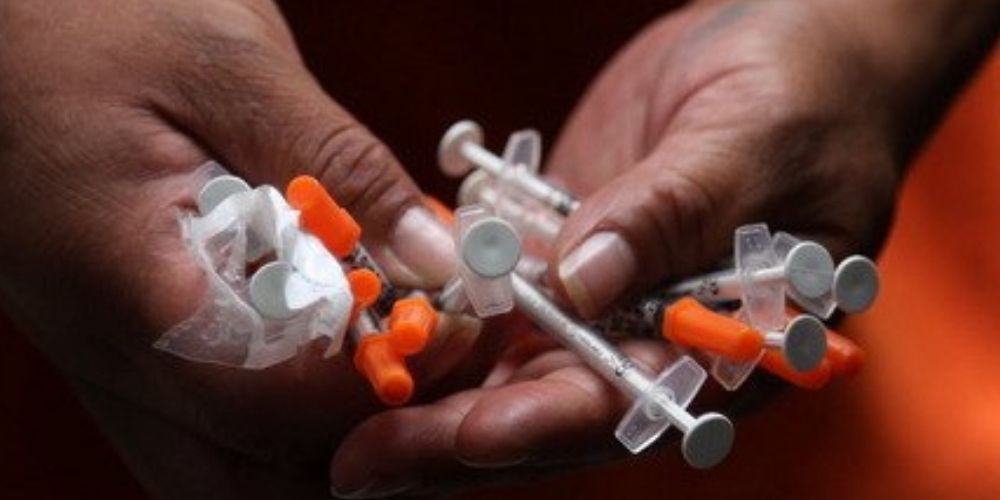 According to the proposal, addicts would be able to "safely consume pre-obtained substances" under medical supervision. Advocates claim that injection sites reduce overdose deaths and infectious disease, increase the number of people who seek addiction treatment, and do not increase drug trafficking or crime where they are located.

The measure now heads to the desk of Governor Dan McKee.

Proponents of the Rhode Island legislation (2021-H 5245A, 2021-S 0016B), such as the Drug Policy Alliance, specifically cited Canada's injection sites as a model to replicate.

But according to new studies and data, these sites do the exact opposite of harm reduction. A bombshell study by the Alberta government was released in 2020 on the province's Safe Consumption Sites (SCS), their term for heroin injection sites, which disproved the long adhered to talking points of SCS supporters.

Calls to police to report criminal activity increased near safe consumption sites. Local residents complained about lack of response to calls for police service, as well as "de-policing" near the sites.

There was an increase in needle debris on public and private property where SCS sites were located. This was a major concern for those who lived nearby, and helped create a perception among community members that the sites both decreased safety and increased crime.

Sen. Miller, who chairs the Senate Committee on Health and Human Services in Rhode Island said, "People who are addicted need help and protection from the most dangerous possibilities of addiction. Having a place where someone can save them from an overdose and where there are people offering them the resources they need for treatment is a much better alternative to people dying alone in their homes or their cars."

The Alberta study debunked these claims.

One of the main arguments in support of SCS is that there are no deaths at the sites themselves. While only a doctor or a coroner can declare a person legally dead, there are usually none of these professionals on site.

EMTs can respond to an overdose event at a site and take the person to a hospital where they are declared dead in the emergency room, removing the death event from the location of the site. Alternatively, an overdose victim can be saved by Naloxone on site but refuse further treatment, then leave the facility and die elsewhere. Neither of these deaths would be attributed to the site.

Rhode Island Rep. John G. Edwards said in a news release that "Not only do harm reduction centers severely mitigate the chance of overdose, they are a gateway to treatment and rehabilitation of people with substance abuse disorder." Yet the Alberta study showed the exact opposite: "The Committee became concerned with the lack of focus on referrals to detoxification and treatment resources. Where it was suggested that referrals were made, no evidence was found to support action taken to follow up on such referrals."

"Stakeholder feedback predominantly suggested that the SCS have had a negative social and economic impact on the community."

What is immediately evident is that the amount of crime increased substantially in the area immediate to the SCS. This could also be attributed to the fact that "Site users and operators typically believed that the Section 56.1 exemption allowed for a no-go zone for police within the proximity of the site. Evidence suggested a level of 'de-policing' near some sites."

On the matter of policing, "Police officials indicated that having somewhere to take individuals other than cell blocks would be helpful. They noted that, often, jail was not suitable for these individuals, but that they were not unwell enough for hospital urgent care. Concerns were not limited to drug treatment programs, but were also directed toward obtaining mental health programming, other medical treatment and integration with social services, such as housing, employment and life-skill programs."

Another concern cited in the report was that "Needle debris was a substantial issue with many residents complaining about used and unused needles, broken crack pipes and other drug-related paraphernalia being discarded in the vicinity of the sites and in public areas near the sites."

The report also highlighted the link between addiction and homelessness. "While it is likely that most drug users are not homeless, a significant portion of SCS clients fall within that demographic."

"Many proponents as well as opponents of SCS maintained that much of the perceived social malaise associated with SCS was linked, not just to drug consumption, but also to the consequences of homelessness. In the minds of many citizens, the appearance and especially the location of tent cities was linked to the location of SCS."

The report went on to say that "While most drug users are not homeless or economically marginalized, many drug users fall into that category. To support their use, many turn to marginal or criminal activities to pay for their drug supply. Typically, those activities range from panhandling to theft, robbery, fraud, prostitution or the secondary distribution of illicit substances. Persons selling drugs—drug dealers—will also engage in crimes such as assault or intimidation to collect debts incurred by drug users."

British Columbia, which also has injection sites that have devastated neighborhoods, is on pace to beat last year's record overdose numbers. Though advocates for the injection sites claimed that users would have to bring their own drugs and that narcotics were not provided, Doctors in BC were recently approved to prescribe drugs like hydromorphone, an opioid that is five times more powerful than morphine; Dexedrine, a stimulant for cocaine and methamphetamine users; and tablets of fentanyl, a synthetic opioid.

Vancouver even has opioid vending machines. Last week, a group of 150 activists, including city council member Jean Swanson, assembled in front of the Downtown Eastside's local police station, and gave out free packets of heroin and cocaine.

Dr. Mark Ujjainwalla, an addictions doctor who runs Recovery Ottawa in eastern Canada, told The Guardian that users of illegal drugs need treatment for their conditions rather than easier access to substances and that the Canadian solutions are creating more death as opposed to treatment.

"If you were a patient addicted to fentanyl [and you came to me], I would say: 'OK, I will put you in a treatment centre for one to three months, get you off the fentanyl, get you stable, get your life back together and then you’ll be fine.' Why would I want to give you free heroin and tell you to go to a trailer and inject?"

"I’ve got people here who have changed their lives. They were in jail, prostituting, and they came to my clinic, we put them on methadone, they got their lives back, they’re working again. Isn’t that a better story?"

Ujjainwalla was also concerned that drugs from the vending machines could end up on the black market.

In 2018, Philadelphia attempted to open the first injection site in the US. The project faced massive community oppositions and US Attorney Bill McSwain sued to block it claiming that a site where people could bring their own illegal opioids to inject under medical supervision would violate federal law.

The 3rd US Circuit Court of Appeals sided with MsSwain saying that the "the opioid crisis may call for innovative solutions, local innovations may not break federal law."

"But Congress has made it a crime to open a property to others to use drugs... and that is what Safehouse will do," said the opinion citing a federal law passed in 1986, commonly known as the "crack house" statute.

As a US senator, now president, Joe Biden was one of the authors of the statute, but in recent years Biden has claimed the law's sentencing disparities between crack and powder cocaine caused racial injustice. This followed revelations regarding his son Hunter Biden's very public drug use.

Biden's new plan to end the opioid epidemic makes only one mention of needle exchanges and no references to heroin injection sites.

City Council members argued that too many people come from out of town to use the needle exchange service and that the site has contributed to syringes littering the boardwalk and parks.

City Council President George Tibbitt held up a plastic jar nearly half-full of needles that he said he found in a park during the meeting and said, "They give out these assisted suicide devices, being the needles, and these people are ending up dead in the streets. We're taking our streets back. It's gotten out of control."

Another council member ended up in the hospital earlier this month with a broken nose and eye socket after he was attacked by supporters of the needle exchange program. Councilman MD Hossain Morshed said from his hospital bed last week. "I thought they were going to shoot me. I'm thinking about my family and if I died, who was going to take care of my family."

Many other cities including San Francisco, Seattle, New York City, Baltimore, and Denver have filed amicus briefs to support opening injection sites even in the face of overwhelming data illustrating their failures.

More than 93,000 people died of drug overdoses in the US last year, a 30 percent rise from the year before, according to the Centers for Disease Controls and Prevention.