35-year-old Britney Erica Austin, formerly Eric Austin, was among 18 individuals arrested in downtown Phoenix at a violent anti-police protest. Austin was covered head-to-toe at the time in a black abaya, or women’s Islamic robe, and a burka. 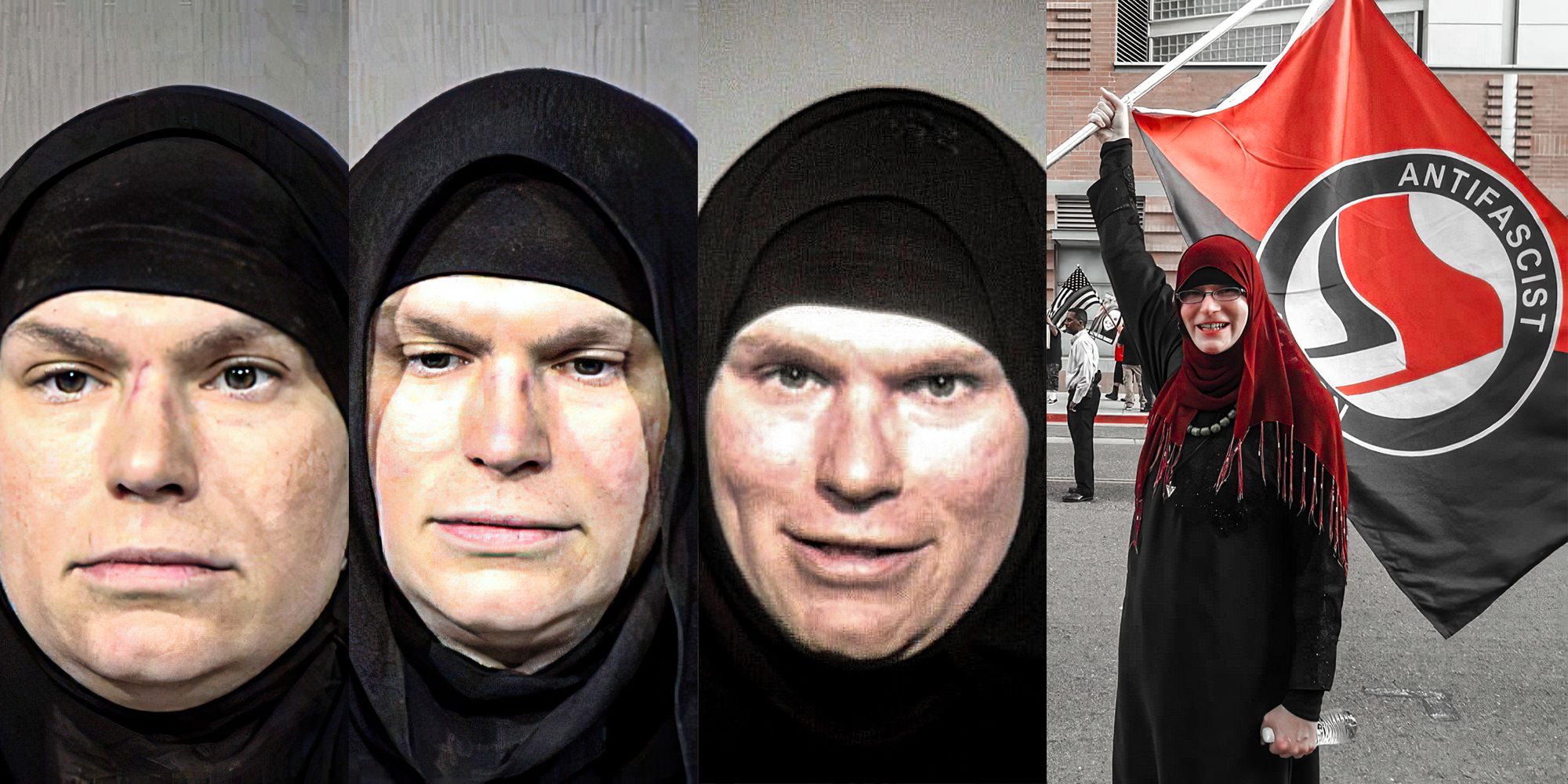 35-year-old Britney Erica Austin, formerly Eric Austin, was among 18 individuals arrested in downtown Phoenix at a violent anti-police protest. Austin was covered head-to-toe at the time in a black abaya, or women’s Islamic robe, and a burka.

Protesters shut down traffic and Phoenix Police say the group of rioters hurled incendiary devices at responding officers. Austin was carrying a semi-automatic rifle at the time. Police declared an unlawful assembly and fired impact munitions.

Austin was taken into custody on charges of felony first-degree hindering prosecution, felony riot and unlawful assembly. She’s been arrested at least a half-dozen times related to far-left protests in Arizona. Austin did not respond to a request for comment but has published social media posts about her most recent arrest.

“There were multiple trans and gender non-conforming folx who were repeatedly and intentionally misgendered, disrespected, dehumanized, and violated throughout the process including me,” Austin wrote on Facebook. “I was also subjected to intentional and gender-based Islamophobia and retaliation for asserting my legal rights.”

Austin alleges she was body-searched by a male officer and in the presence of other men, which she says is a violation of her Islamic beliefs.

Austin, a Muslim convert who also goes by the name “Sumayyah Dawud,” has a long history of far-left activism in the Phoenix area. She attends protests frequently where she can be seen carrying a semi-automatic rifle and symbols of antifa. In July, she put out a call on social media for people to attend a Phoenix direct action organized in “solidarity” with Portland antifa group, the Youth Liberation Front. Several cities experienced simultaneous violent rioting that night on July 25.

Before her more recent involvement in Antifa protests and riots, she engaged in lawfare activism. In 2011, she sued her employer, a check-printing and financial-services company, for sex discrimination on allegations that they were not supportive of her transition and did not allow her to use the women’s restroom. Phoenix for Deluxe settled the lawsuit for $115,000.

Then in 2015 she tried to sue the Phoenix Police Department on an allegation of religious discrimination when she was photographed without her burqa for a booking photo. She was initially represented by the local chapter of the fundamentalist Muslim legal organization, the Council on American and Islamic Relations, or CAIR, but it dropped her after finding out she is transsexual.

Also in 2015, Austin made the news again after she was kicked out of the women’s section of the Islamic Community Center of Tempe following complaints from Muslim women. She was allegedly told by the mosque that she would only be allowed back if she dressed and prayed as a man if she could not prove she was biologically female.

“The Islamism of Muslim radicals and the ‘wokeism’ of Antifa agitators are twin ideologies born from the same source: the cult of extremism,” Muslim journalist Asra Nomani tells The Post Millennial in an email. Nomani has spent more than a decade reporting on Islamic fundamentalism and its intersection with leftist politics. “Since the Sept. 11 hijackings, radical Muslims have seized upon the racial politics that Antifa exploit today, and extremists in both groups work together to further their joint mission of stoking division and hate. This hybrid of identities manifests in a person like Britney Austin.”

Last year, Austin was arrested for disorderly conduct at a Tempe City Council meeting in which one protester was accused of aggravated assault on a police officer. Last month, Austin showed up armed with an AR-15, a pistol and hunting knife to counter a conservative pro-police rally in Gilbert, Ariz.

Austin and the others arrested last weekend have their next court date on Oct. 26.