"There are people who have crawled into homes during the day in my neighborhood, through the windows when their children were home," said one mother. "People’s cars just disappear, so everyone is just really tense and afraid that it’s going to be them next." 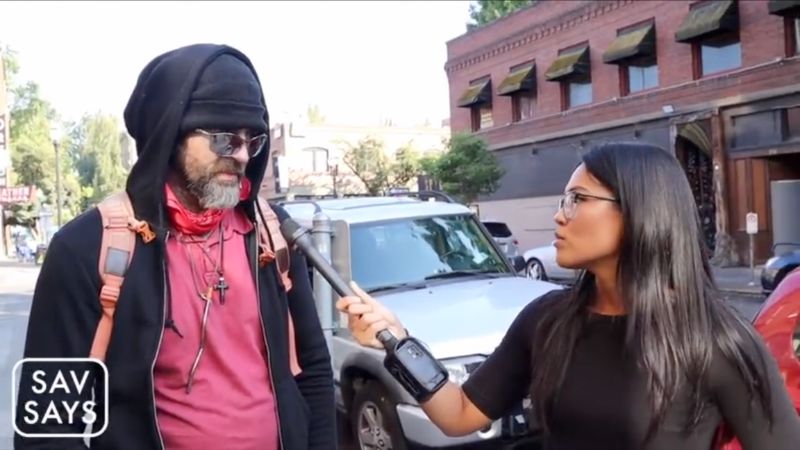 During a week-long trip to Portland, journalist Savanah Hernandez captured video of the intense crime, homelessness, and drug abuse that are plaguing the city that two years ago led the charge in the decriminalization of hard drugs.

Back in 2020, the state of Oregon decided to decriminalize hard drugs throughout the state via Measure 110. This measure decriminalized the possession of drugs such as fentanyl, cocaine, methamphetamine, heroin, etc.


Since the measure passed in 2020, drug overdoses, open drug use, homelessness, and crime have skyrocketed in the city of Portland, leaving locals terrified and the city abandoned to surging crime as the drug-addicted homeless roam the streets.

During an interview with a homeless drug user in Portland, the addict, wearing what he calls a "tooter" (slang for a tool used to snort powdered drugs), shared the story about how he became homeless due to the COVID-19 lockdowns.

"I came here about five years ago, just trying to get away from where I was," he began, "before COVID I got clean down here with CCC, it was pretty cool, and then COVID hit and I lost my house and my job and I came back to the streets ‘cause that’s what I know."

After speaking about dying from overdosing three times and sharing that Portland’s local government needs to create "safe injection sites" to combat people doing hard drugs on the street, he finished by taking a hit from a piece of foil containing 3 small blue pills.

He shared off camera that he was smoking a mix between Percocet and fentanyl, something he does everyday.

Alongside the lax policies on drug use, homelessness and crime have also plagued the city of Portland.

An attempted theft of a local corner store was caught on camera when a homeless man decided to swipe a pint of ice cream on his way out of the store. The customer who stopped him shared that he had over $1,000 on an EBT card, but he still tried to swipe the ice cream on the way out.

The shop owner shared that this was not just a regular occurrence, but something that happens "everyday, a couple times."

This shop owner is not the only business that has been directly affected by Portland’s soft-on-crime policies. Starbucks is set to shut down a third Portland location citing "safety concerns."

This Starbucks is located in an area surrounded by high-rises and high-end shops, however, not even the most expensive parts of Portland are immune to crime.

Unfortunately, the suburbs of Portland aren’t doing much better.

One mother who resides in a neighborhood far from the downtown area shared that in her neighborhood, "everyone’s on edge."

"There are people who have crawled into homes during the day in my neighborhood, through the windows when their children were home," she stated. "People’s cars just disappear, so everyone is just really tense and afraid that it’s going to be them next."

She further details how criminals have even stolen cars that have children inside of them, and that criminals can get away with driving without a license plate, due to Portland police no longer stopping vehicles for "low-level traffic violations." This has left residents with no ability to identify vehicles used to commit robberies in their neighborhoods.

Another common scene on the streets of Portland is drug users overdosing in broad daylight.

One drug user was seen lying unconscious on the streets of downtown while simultaneously being pickpocketed by another homeless woman. The first officer to roll up to the scene shared that this happens, "several times a day."

"With drug decriminalization, usually what I can do is I can give him a citation and give him references for drug treatment, but I can’t arrest him anymore," the officer shared, "so this is how it’s been going downtown, drugs are pretty prevalent, we have a lot of people who say they come down here because of the availability of drugs."

He shared that during the summer overdoses got so bad that, "you would have 4 or 5 people overdosing almost at a time in a couple block radius”.

Per the City Journal of Oregon, criminal justice reformers originally garnered local support for Measure 110 by claiming that it would, "reduce both addiction and alleged racial disparities in the criminal justice system." Reformers also claimed the law would provide a pathway to treatment for addicts and since its passing, over $300 million in funding has been allocated to the measure.

However, over two years later, we’re seeing the horrible reality of leaving hard drug use unchecked.

"Overdose deaths rose by over 33 percent in Oregon in 2021, the year after the law was passed, compared with a rise of 15 percent in the rest of the United States." the City Journal writes.

Regarding the treatment options for addicts, "less than 1 percent of the people eligible for treatment under Measure 110—a paltry 136 people—ended up getting help. In fact, out of the 2,576 tickets written by police for drug possession, only 116 people called the help hotline to get the ticket waived,” the City Journal continues.

Alongside drug addiction came a huge jump in crime, fueled by drug-addicts stealing property to continue funding their addiction.

While progressive activists and "fact-checkers" continue to try to pretend these statistics are untrue. The drug-ridden streets of Portland speak for themselves.

Anyone can take a quick walk through downtown Portland and witness open drug use, public defecation, theft, or even an overdose.