"If you are offended because I don't believe parents are infallible, you can always sue or take your child out of school. Your choice," wrote the York County, Penn. school board member. 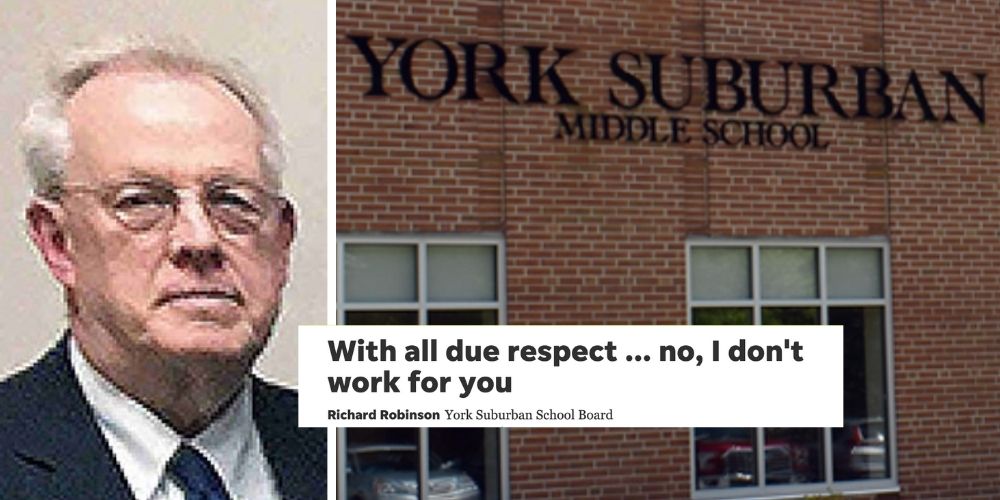 York County, Penn. parents are speaking out in anger after a school board member penned an op-ed piece in a local paper calling them "offensive and vile," and referring to them as "charlatans."

The York Suburban School District board voted last week to require face coverings in schools, according to the Daily Mail. In the days following the vote, Richard Robinson, a member of the school board for over six years, penned a piece titled "With All Due Respect, No I Don't Work For You" which tore into parents that voiced their concerns over the mandate during the meeting.

In the piece, Robinson states that "it is a requirement of local school boards to provide opportunities for public comment," and usually, not a lot of people showed up for these sessions.

"Not these days. As social media outlets, national news broadcasts and our local newspapers tell us, school boards are now the new battleground in the fight for America's future," he wrote.

"Some members of my community appear to interpret this part of board meetings as the occasion to tell board members why they have the collective intelligence of a village idiot and how the school district ought to be addressing real problems. When the board does not fall in line with each and every demand, we are accused of ignoring the thoughtful, unbiased, sincere and righteous ultimatums of our community," he continued.

In his piece, Robinson lays out six bullet points, each beginning with "With all due respect." For first point, Robinson states that the school board members do not in fact work for the parents or taxpayers of the town.

"With all due respect to the men and women who snarl, 'I'm a taxpayer! You work for me!' No, I don't work for you. I was elected by people who voted to represent you. It is not the same thing. You may also be surprised to learn every member of a school board is a taxpayer, too," wrote Robinson.

In the next point, he reportedly takes aim at dentist Dawn Bentivegna without using her name, according to the Daily Mail.

"With all due respect to the people who introduce themselves as doctors without mentioning their specialties or credentials and expect their pronouncements to be accepted as unimpeachable: When I have a toothache, I don't go to an oncologist," he wrote.

"To me, the logical person to consult about a virus is a virologist. When a person introduces him or herself as a doctor, their education, training and experience matter to me. After all, Jack Kevorkian was a doctor," he continued. Kevorkian was a proponent of assisted suicide.

In another point, Robinson takes aim at parents who say they know what's best for their children.

"With all due respect to the parents who make the pretentious statement phrased as a foregone question, 'Don't parents always know what is best for their child?' No, we don't. Nevertheless, if you are offended because I don't believe parents are infallible, you can always sue or take your child out of school. Your choice," he wrote.

His final point appears to digs at parent Nicole McCleary, who spoke out at the meeting on how COVID-19 is creating a mental health crisis among young people.

"Finally, with all due respect to the charlatans who claim health and safety measures are responsible for destroying the mental health of children simply to justify their own social agenda, you are the most offensive and vile of all," he wrote, not mentioning her name.

"There are members of this community who tried to draw attention to the warning signs of increasing mental distress among our children long before you ever thought of mental health as a potential cudgel. To listen to your repeated distortions of the facts is nauseating," he added.

Speaking with the Daily Mail, McCleary said: "This is a school board member giving a public lashing to concerned parents who have every right to express their views. We are parents who can't get responses on anything from this school board. This is all we have left, and we deal with it."

"He is an elected official who says he does not work for us. And that he knows what's best for our children," she added.

McCleary continued on to state that these parents are exercising their right to give public comment in regards to their children, and that Robinson's statement that he doesn’t work for the parents is a "bitter and callous response."

"If you don't work for the people you represent, who do you work for?" McCleary said. "I can't imagine a parent who would be happy with seeing this. That I don't work for you, you don't know what's best for your kids."

McCleary added that she believed the reason for Robinson's comments was to shut down growing parental opposition.

"Mr. Robinson wanted to let us know that not only does he not appreciate what we said, but he doesn't care. I truly believe the whole purpose of that piece was to give us that public lashing," she said. "I'm sure there is the desire, that, hey if I embarrass these people maybe they are not going to show up any more."

McCleary noted that the piece was "clearest evidence I've seen in some time" that the school boards "truly have no regard for taxpayer and parent input."

"In fact they appear bothered by constituents exercising their rights to have their voices heard. He's saying the quiet part out loud, including that schools know more than parents about what's best for their kids," she said.

"I'm the charlatan he references in his 6th bullet point. I care about the impact their decisions have had on my child's mental health and I exercise my right to remind them of it. Virtually every one of his bullet points targets a parent who spoke that night," she added.

McCleary is a member of a parents group that claim the school board habitually refuses to respond to requests for information. The group frequently turns up at meetings to address the members during public sessions, particularly over COVID-19 measures and mandates.

48-year-old father-of-four Brian Sigley is a member of this group, and despite not being at the last school board meeting, he expressed his disgust at Robinson's comments.

"I am disgusted by what Mr. Robinson wrote," he said. "I feel as a parent, a taxpayer and a community member and my children as members of the school, he has discounted our thoughts, our beliefs, our concerns. Basically calling people charlatans for talking about mental health issues, it's hard to believe."

Sigley said he has emailed Robinson to explain what Covid "has done to my children" and was awaiting a response.

"He was trying to shut us down," he said. "Basically letting us know that no matter how many meetings you come to, no matter what you say, his opinion is already formed, he is not going to change his way of thinking."

Sigley continued on to say that saying parents "aren't always the right ones to make decisions for their children – correct, we don't always make the right decisions." He added that parents do what they feel is best for their family, a point that Robinson discounted.