Seattle residents, tired of their streets being used for homeless encampments and vehicles, blocked off parking spaces with cement blocks only to cited by the city. 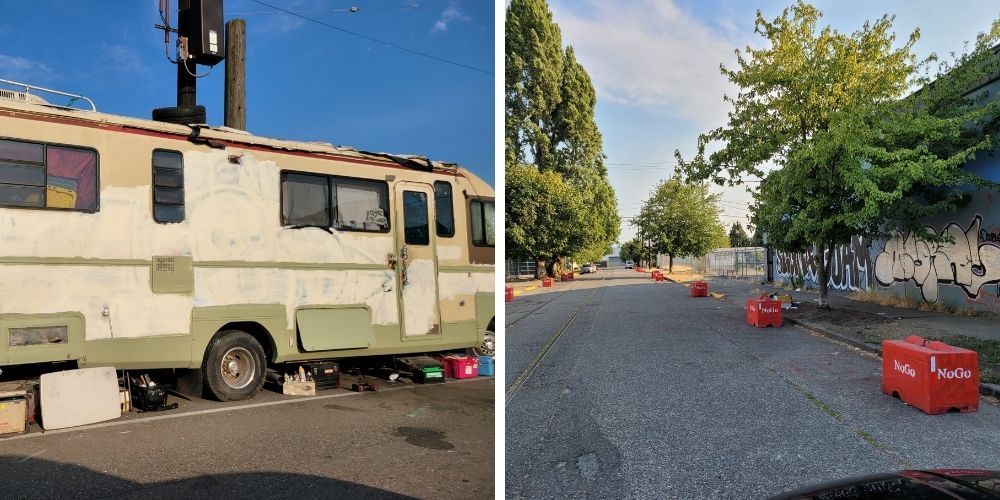 Residents and businesses in multiple neighborhoods of Seattle, tired of the city’s unwillingness to deal with broken down RVs and tents inhabited by addicts, drug dealers and criminals have peacefully taken matters into their own hands and were cited by the city for their efforts.

A longtime area property owner who never had a vacancy since he first bought his commercial property in 1993 was losing tenants and customers because they felt unsafe in the neighborhood which has been overrun with crime.

Multiple calls to authorities and officials yielded no results. Crime became so bad that a local blood bank, a target of frequent break ins by junkies seeking needles and other supplies, had to hire full time security at a cost of $12,000 a month.

Other neighbors began moving out. One business that had been in the area for over 110 years sold their building and another moved to North Carolina.

Aside from the crime from the campers, the RVs parking near intersections created unsafe road conditions because the height and width of the vehicles blocked driver's views of intersections. Several accidents were witnessed by the neighbors.

Neighbors were not without compassion. They organized community meetings and even proposed a nearby vacant lot be used as a "safe lot" for the vehicles as had been done in other cities. Conference calls were organized with City of Seattle representatives and organizations that help the homeless but none of it worked to alleviate the challenges.

When one of the campers, whose vehicle was parked in the same spot for over a year, was shot three times, some of the neighbors provided money for a hotel room after his release from a hospital and continue to support him. Others offered food and even barbecued for the campers.

Finally, some of the campers and RVs which had been in front of the property for months moved, so neighbors began placing 2-foot by 4-foot by 2-foot blocks of concrete on the sides of the street to prevent anything larger than a car from parking. One neighbor installed a fence to keep the vehicles away from their building which had been repeatedly vandalized and damaged by the campers.

Other neighbors followed suit and soon most of the RVs and campers found other locations to park. Neighbors began getting more creative and installed planters, trees and painted the blocks to beautify the neighborhood.

The reprieve was short lived. The City of Seattle began sending the neighbors letters stating that it was a crime to leave the blocks because they were a hazard and threatened penalties. The city did not cite any of the RVs or campers, some had been in the same spot for months, even years.

The neighbors have called the obvious hypocrisy "selective enforcement." Out of desperation, knowing the city's inevitable action would be to fine the neighbors and remove the blocks one neighbor said in a letter to the city "I respect that the city may want to move the blocks. I would request, if you do so, that you remove all the blocks in Georgetown, so the new homeless population that moves in will spread out and not just rush to move in front of my building."

In a statement to The Post Millennial, Ethan Bergerson, SDOT Media & Public Affairs Lead said, "We recently received notice from a member of the public about concrete blocks obstructing streets, sidewalks and parking in several locations around Georgetown, SoDo and Ballard. We responded by following our standard procedure, which was to send a Street Use inspector to verify that these were unpermitted obstructions to the public right-of-way, and then to contact the adjacent property owners to issue warnings to remove the concrete blocks and advise them of penalties if they do not comply."

SDOT also cited Seattle Municipal Code 15.04, which states that it is unlawful to place objects or structures in a public place without first securing a written permit. However, none of the campers or RVs had permits.

"We do not issue permits to obstruct public streets," SDOT said in a statement, "sidewalks or parking spaces with concrete blocks because the desire to prevent others from using a public space is not a valid reason for seeking a permit in and of itself, and this can also cause other problems such as parking spillover onto adjacent streets or accessibility barriers which violate the Americans with Disabilities Act (ADA)." Ironically, many handicapped residents have frequently complained about tents and RVs blocking access to their designated spaces.

Residents across the city have countless similar stories of selective enforcement. Landlords and homeowners who posted "no-parking" signs on their buildings received letters from the Seattle Department of Transportation (SDOT) that the signs were a  "public nuisance" but tents and RVs whose occupants broken into businesses and vandalized properties were allowed to remain.

Under the direction of Seattle Mayor Jenny Durkan and at the urging of the City Council, SDOT spent over $1 million dollars installing the exact same type of barricades to block streets to strengthen the boundaries of the armed occupation by BLM and Antifa of six blocks of the city for an "autonomous zone."

SDOT told The Post Millennial that regarding the blocks placed by the neighbors, "...each concrete block weighs 1 – 2 tons and removing these massive obstructions is costly and diverts our staff from completing important work to maintain our streets and other infrastructure."