"I personally turned her request down," Trump said of Cassidy Hutchinson's interest in working for him at Mar-a-Lago. 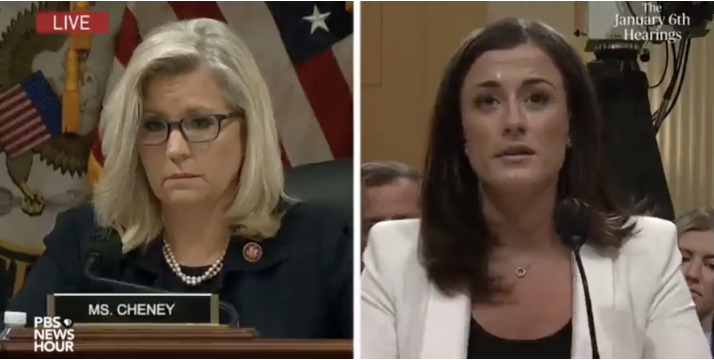 The January 6 Committee on Tuesday brought in a surprise witness to provide testimony on former President Donald Trump's activities surrounding the Capitol riot on January 6, 2021. That witness, aide to former White House chief-of-staff Mark Meadows Cassidy Hutchinson, spoke about Trump's interest in joining the crowd on that day. Yet it was only a few days later that reporting emerged that she was looking to work for Trump as he re-entered private life at his Florida Mar-a-Lago residence.

"Trump aides who may work for him after the White House include Nick Luna, the director of Oval Office Operations and Trump's 'body man;' Molly Michael, a deputy assistant to Trump; and Cassidy Hutchinson, an aide to Chief of Staff Mark Meadows, the people said. Luna’s wife, Cassidy Luna, a deputy assistant to the president, may work for Kushner," Bloomberg reported on January 14, 2021.

Trump noted his impressions of Hutchinson, saying "I hardly know who this person, Cassidy Hutchinson, is, other than I heard very negative things about her (a total phony and 'leaker'), and when she requested to go with certain others of the team to Florida after my having served a full term in office, I personally turned her request down.

"Why did she wants to go with us if she felt we were so terrible?" He continued. "I understand that she was very upset and angry that I didn't want her to go, or be a member of the team. She is bad news!"

Hutchinson, in her 20s, had already given three interviews to the committee's investigators prior to appearing in person. She relayed a second-hand story about a limo ride during which, she was told, Trump became "irate," and said "something to the effect of 'I'm the effing president, take me up to the Capitol now.'"

In further hearsay testimony, she said that a man in the car told Trump they had to go back to the West Wing. It was relayed to her that Trump, unhappy with this, "reached up toward the front of the vehicle to grab at the steering wheel. Mr. Engel grabbed his arm, and said 'sir, you need to take your hand off the steering wheel, we're going back to the West Wing, we're not going to the Capitol.'"

Hutchinson testified that she was further told that "Mr. Trump then used his free hand to lunge toward Bobby Engel." The person who recounted this to her, she said, "motioned towards his clavicles."

Trump contradicted her overheard testimony, saying Hutchinson's "Fake story that I tried to grab the steering wheel of the White House Limousine in order to steer it to the Capitol Building is 'sick' and fraudulent, very much like the Unselect Committee itself - Wouldn't even have been possible to do such a ridiculous thing. her story of me throwing food is also false...and why would SHE has to clean it up, I hardly knew who she was?"

Later during her testimony, it was Hutchinson's emotions and feelings that took center stage. Wyoming Rep. Liz Cheney asked Hutchinson about her feelings when she was told that "things might get real real bad."

Hutchinson spoke about her feelings of "apprehension," and gave more hearsay evidence. She said she remembered feeling "scared" and "nervous" about what was "happening with the planning aspects of it."