'That looks like a cover-up': Senator Rand Paul slams Fauci for avoiding questions on Wuhan research

On Fox and Friends Thursday, Senator Rand Paul once again slammed Doctor Anthony Fauci's avoidance on questions regarding his involvement in funding gain of function research in Wuhan. 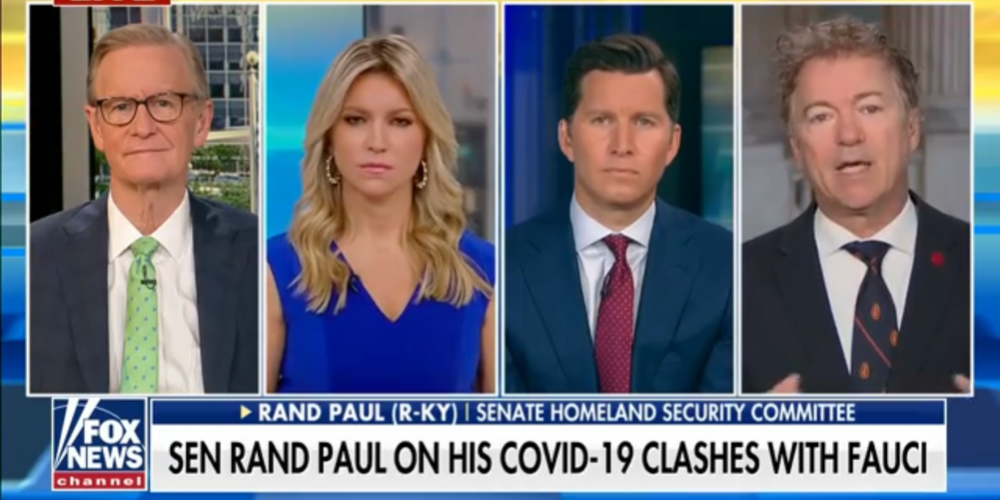 On Fox and Friends Thursday, Senator Rand Paul once again slammed Doctor Anthony Fauci's avoidance on questions regarding his involvement in funding gain of function research in Wuhan.

"You know, Gayle, I just don’t want to get into that tit-for-tat,” Fauci said on "CBS This Morning” when asked about Paul's questioning. “I just don’t understand what the problem is with him. I’m just going to do my job and he can do what he wants to do and we’ll see what happens."

Paul, in response, said that "If [Fauci] was being interviewed by a journalist, they would have asked, Did the NIH, did your specific division of the NIH, give money to the Wuhan lab? That’s incontrovertibly true. What he’s arguing is he’s parsing his words. He knows his group gave money, but he’s saying, 'Oh, it wasn’t for juicing up these superviruses. We gave it for other research.'"

Paul added that how Fauci worded where the research money was going was equivalent to the argument that taxpayer money that goes to Planned Parenthood doesn't fund abortion procedures.

Dr. Shi Zhengli, the Wuhan-based virologist who was studying coronaviruses in animals, published a paper that thanks Fauci specifically, according to Paul. That research, scientists are saying, was gain of function research, a type of research which looks at making viruses more infectious and lethal to humans.

"We have this in black and white from a peer-review journal, she said the funding came from Dr. Fauci’s NIAID, this is Dr. Fauci’s baby for 40 years, she lists him in the credits, he can’t escape this," Paul said. “He did the funding.”

Paul also questioned why the United States was funding research in China, a nation that should be able to fund itself.

"China is a rich country and they’re kicking our butt in so many places. Why would we be giving them money for their research?" asked Paul. "Can’t they spend their own money on their own research?”

When asked whether Paul had received the answers he was looking for in regards to Fauci, Paul replied that he was not, and has sent inquiries trying to dig deeper into the matter.

"We’re asking specifically for some NIH papers and the conclusions because in those conclusions, we believe it will be unequivocal from a group of scientists that they will conclude that yes, the Wuhan Institute was making these super-viruses." Paul said.

PolitiFact, a fact checker, confirmed that the NIAID awarded money to EcoHealth Alliance. This group then hired the Wuhan Institute of Vieology to study bat coronaviruses.

"In 2014, the U.S. National Institute of Allergy and Infectious Disease, the part of the NIH headed by Fauci, awarded a $3.4 million grant to the New York-based EcoHealth Alliance, which aims to protect people from viruses that jump from species to species," PolitiFact states. "The group hired the virology lab in Wuhan to conduct genetic analyses of bat coronaviruses collected in Yunnan province, about 800 miles southwest of Wuhan. EcoHealth Alliance paid the lab $598,500 over five years. The lab had secured approval from both the U.S. State Department and the NIH."

Paul slammed other outlets for "yukking it up" with Fauci, and never asking the question of if he funded the institute. He says that Fauci is trying to "evade that he funded it at all."

"I asked him the general question. I didn't ask him whether he funded gain of function, I said did the NIH fund the Wuhan lab, and he danced around it and answered a different question," said Paul. "But there is no question at all that the NIH funded this lab."

Paul added that Doctor Peter Daszak, the president of EcoHealth Alliance who was the one the WHO asked to investigate the Wuhan lab, might have a vested interest in attempting to smooth things over.

"Ultimately, here’s the rub,” Paul said. "I don’t know whether it came from the lab. Nobody knows whether it came from the lab. But who would be culpable? Dr. Fauci could be culpable for the entire pandemic. So could Dr. Daszak, and so could Dr. Shi. I’m not saying that happened; I don’t know. But you wouldn’t put the people who gave the money to the Wuhan lab in charge of the investigation."