One drag queen talked to a 9-year-old and said to the boy's mother, "You are such an awesome mom for bringing your kid out to a family-friendly drag show." 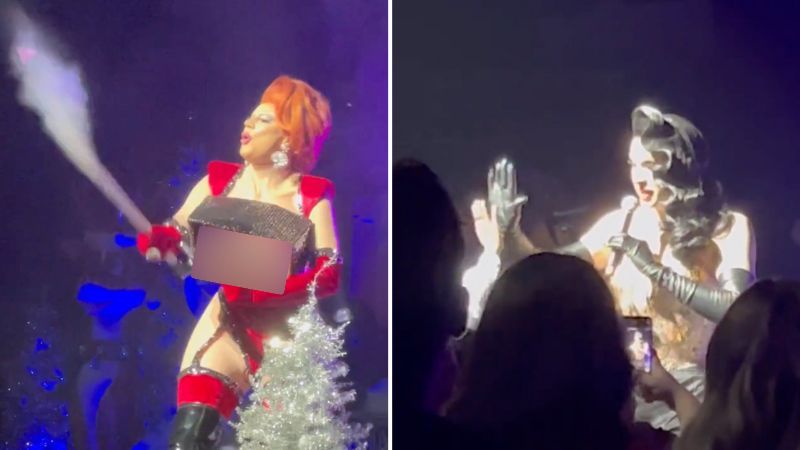 Joshua Young Youngsville North Carolina
Dec 15, 2022 minute read
ADVERTISEMENT
ADVERTISEMENT
An "All Ages" drag show was held on Wednesday in Austin, Texas called "A Drag Queen Christmas," which was performed in front of over 20 children and featured performers doing acts like "tits in a box," simulated sex, spankings, and telling stories of sexual encounters.

Independent journalist Tayler Hansen tweeted, "'All Ages' Drag Queen Christmas Mega Thread Yesterday, a blatantly sexualized show meant to groom children was hosted in Austin, TX. This is a national tour with 36 shows in 18 different states, including DC. There is much to go over so it will be covered in this thread."

Hansen reported on one performer who performed with his "tits in a box," and said to a child in the audience, "are you reaching for my titties, are you hungry." The same performer had several people spank him.

Another act was "Screwdolph the Red Nippled Reindeer" in which "they simulated sex countless times, sexualized a child’s story, including Santa, and had sexual videos playing in the background."

"When the host asked a child what his favorite part of the show is he replied 'nothing'," Hansen added.

In another performance men danced with kink harnesses and simulated sex acts. The lead drag queen talked to a 9-year-old and said to the boy's mother, "You are such an awesome mom for bringing your kid out to a FAMILY FRIENDLY DRAG SHOW."

The drag queen "Crystal Methyd" also performed in a sexualized fashion and, according to Hansen, "At the end of the performance Crystal licks his 'Peppermint breasts' and the host, Nina West, says 'mmm minty fresh'."

In another "Crystal Methyd" act the performer sexualized the ghost of Jacob Marley from Charles Dickens' immortal classic, "A Christmas Carol."

Another drag performer spent several minutes talking to several children in the front row. One child said they watch Ru Paul's Drag Race but could not mention their favorite performer.

At one point the drag artists said, "Are you having fun, are you enjoying it, are you confused yet?"

Hansen tweeted, "The host, Nina West, played a 'game' with the audience called naughty or naughty. The game involved giving explicit details of sexual encounters. In the video, Nina details having sex with her dad's coworker in his office. An audience member shared his explicit story as well."

"'I saw you guys with your mom in the meet and greet, where’s Melinda the mom? Melinda right? Wait tell me your name again. Sonya! We need more mothers like you in the world, thank you so much.' The Drag queen then addressed the children of the parent," Hansen reported of another encounter.

"Over 20 children were in attendance at this show," Hansen said. "These are the kinds of shows being marketed as 'all ages' and 'family friendly'. Activists try to spin these shows as being educational and important to LGBTQ rights. It will be interesting to see how they try to spin this one."

The event was advertised as "The Naughty Tour" online but that portion was quietly removed from advertising.

The next date on the tour is December 17th in Dallas, Texas.

Hansen also reported that the host of the show, Nina West, "is affiliated with Disney+ and Nickelodeon." Both networks create content exclusively for children.

Nickelodeon uploaded a video by West titled "The Meaning of Pride," with the description "Drag queen Nina West performs an original song about the meaning of the rainbow Pride flag. June is Pride Month, so let's celebrate by lifting up voices in the LGBTQIA+ community!"

West was featured in the Disney+ original special "This Is Me: Pride Celebration Spectacular." That special featured West performing as Disney princesses and West also closed the episode out with a duet with Kermit the Frog.
ADVERTISEMENT
ADVERTISEMENT
christmas drag