Rally-goers pushed and pulled Hansen back at some points lifting him off his feet over a person who appeared to be in a wheelchair. 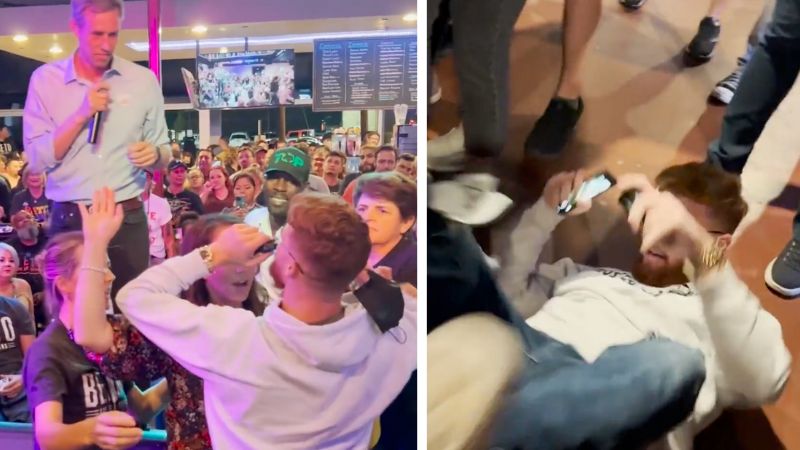 Hansen approached the Texas gubernatorial candidate while he was speaking onstage, and asked if O’Rourke "would disavow surgery for trans kids."

Attendees blocked Hansen from the small stage where O'Rourke, who made a campaign stop at Texas' oldest lesbian bar Sue Ellen's, was speaking.

"We'll see you later, buddy. You're not on the program," O'Rourke said as the crowd went after Hansen.

Video filmed from the crowd showed O'Rourke supporters shoving and pulling Hansen from the stage area, with members of the crowd shouting "get him out of here."

As Hansen asked, "Why do you want to mutilate children Beto?" some in the crowd realized that the crowd was pushing Hansen toward a person in the wheelchair.

Despite pleas about the safety of the disabled individual, the mob continued to shove and push the journalist toward her. One person in the crowd grabbed Hansen’s sweatshirt hood from behind and dragged him down to the floor.

As the journalist attempted to regain his footing, a man bear-hugged him and began manhandling him out of the room as the crowd hurled curses at Hansen.

The video showed people in the crowd surrounding the person in the wheelchair inquiring about her safety. Beto quickly inquired as well before promptly turning back to address the crowd.

"She got knocked over by that a**hole, but she got back up," O'Rourke said.

Meanwhile out in the hall, while being manhandled, Hansen multiple times told the security guard not to touch him before the video suddenly went dark. According to the journalist, he was "slammed into multiple chairs" and his "mic was broken."

Hansen tweeted after the incident, "I will be filing a police report with Dallas PD for assault."