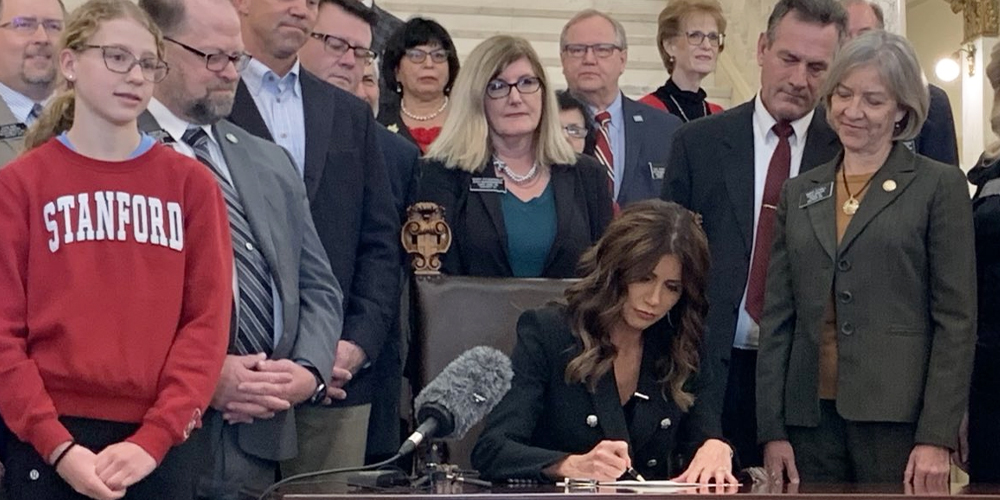 Early last year, the Republican governor faced a wave of right-wing backlash over her initial handling of the matter.

When introducing the bill last month, Gov. Noem described it as "fairness" to Fox News: "This is about making sure that our girls have a chance to be successful and to compete, to win scholarships, potentially go on to play professional sports beyond that. We want them to have the opportunity to do that."

The outlet at the time said South Dakota would become the tenth such state to ban transgendered people from competing on teams in this fashion.

"Senate Bill 46 does not ban transgender males from participating in boys or men’s sports," says Keloland.com.

It was on Wednesday of last week that the state’s House committee first signaled their approval for the bill, which had previously been delayed because of a proposed amendment. The Associated Press at the time made note of how transgender gender advocates labeled it "bullying" to bar transgenders from competing with those biologically born female.

Fast forward to Tuesday of this week, and the athletes bill cleared the last "hurdle" of legislation with a 50 - 17 vote. It was on the same day a restroom ban barring transgender students from choosing the bathroom of their assumed identity was approved by the South Dakota House and was passed on to the Senate.

VICE said Governor Noem’s chief of state compared the legislation to an "anti-terrorism" measure, and propped up the ACLU outcry of the bill’s signing.