The Southern Poverty Law Center (SPLC) has removed the Black Separatist listing on its extensive hate map to underscore that white supremacist extremism is "the most dangerous threat to national security." 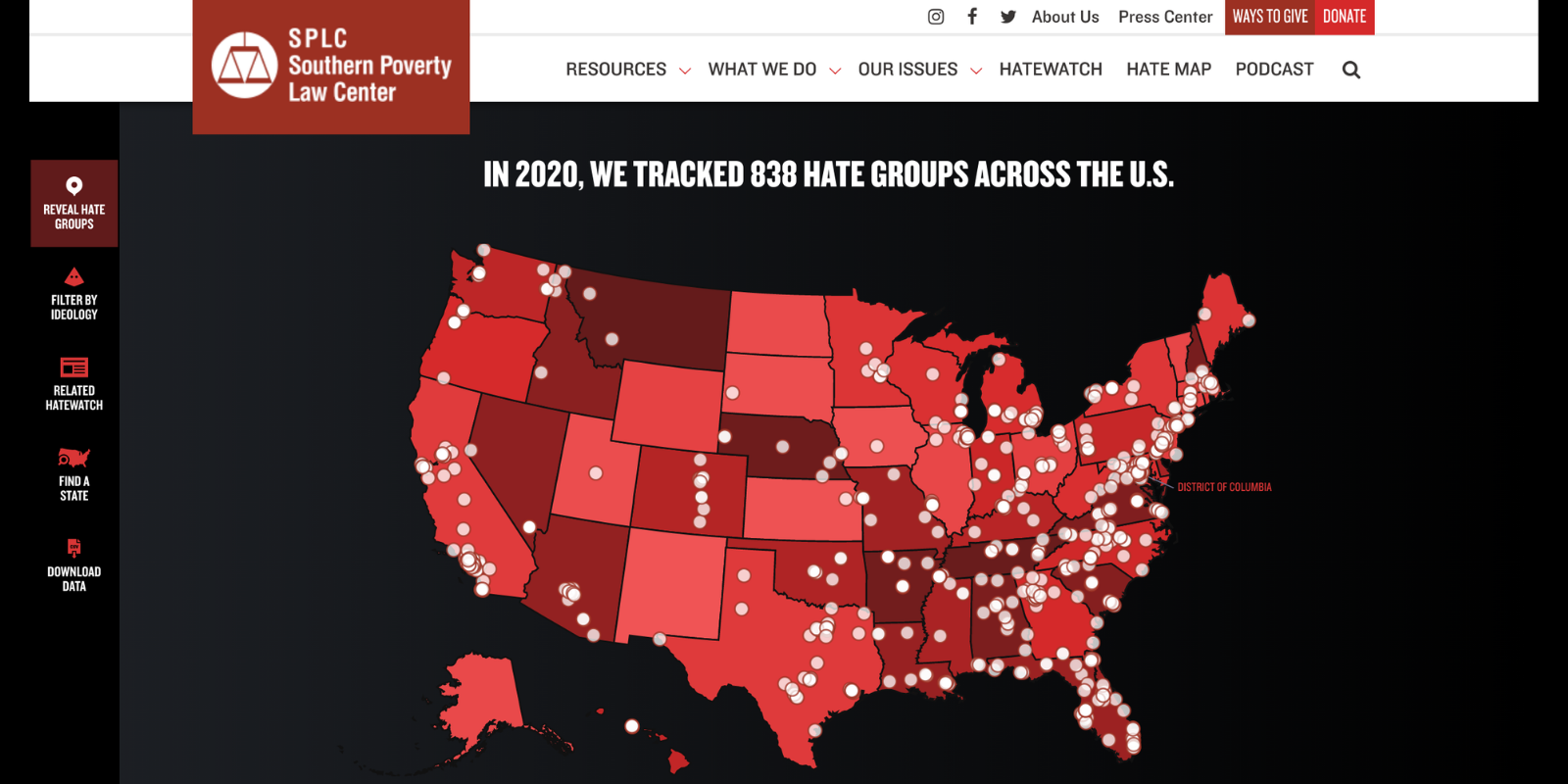 The Southern Poverty Law Center (SPLC) has removed the Black Separatist listing on its extensive hate map to underscore that white supremacist extremism is "the most dangerous threat to national security" while Black Separatism is "rooted in valid concerns about how federal and state institutions treat Black people."

"We're collapsing the Black Separatist listing on our hate map," the SPLC's official Twitter account tweeted on Monday. "Black separatism was born out of valid anger against very real historical and systemic oppression."

The change to the SPLC hate map was announced by the SPLC's Intelligence Project on Oct. 8 as the organization sought "to remove a false equivalence between White Nationalist and Black Separatist hate groups" and "to present the information about extremist groups more accurately and equitably."

"Wanting separation from a society that has historically and systemically oppresses Black communities isn't extremism," the SPLC tweeted at the time. "Black dissent isn't black violence, and equivocating them enables this over-policing of Black activism."

The SPLC's previous definition of Black Separatism "shares language with federal attempts to criminalize Black activism," the nonprofit said. The organization declared that it rejects attempts by federal authorities to use the involvement of Black Separatists in social activism as "justification for over-policing activists in communities of color."

The SPLC specified that the organization rejects "federal law enforcement's false and misleading contention" regarding threats from Black Separatists. "Contributing to a false dichotomy does not serve SPLC's mission of racial equity," the SPLC wrote.

According to the SPLC's holistic "Equity Through Accuracy" updates, the hate map's restructuring will "better capture the power dynamics endemic to white supremacy." The decision comes after "many internal and external conversations."

"It is important to acknowledge the moment we are in and the incredible efforts of groups such as the Movement for Black Lives and the power of protest, despite the militarization of our police departments nationally," the memo reads. "The continued police violence directed against the Black community and lack of justice for their victims shows plainly the struggle for Black lives is not over."

The SPLC maintained that Black Separatist groups are "very much part of activist spaces." While they should be exposed and "held accountable within the activist spaces they inhabit," the SPLC "does not believe criminalizing and over-policing is an acceptable solution." The FBI once used the "Black Identity Extremist" label to monitor types of domestic terrorism. "This label is unfounded, and is in itself a form of suppressing Black activism and organizing," the SPLC rebutted. But in late 2017, the bureau discontinued the term's usage.

The SPLC's Intelligence Project hopes by dropping this listing that the organization can "lead by example" and be able to contribute to "a more accurate understanding of violent extremism, one that foregrounds white supremacist extremism as the most dangerous threat to national security."

"The Black Separatist listing created a color line bias, separating hate and extremism by race and granting the appearance of a false equivalency of equal hate on both sides," the letter continued, claiming that black Americans have "rarely experienced" the power structure that represents them. "However, white nationalism has held historical, systemic and institutional power for hundreds of years in this country."

"Yes, some Black nationalists have committed violence against Jewish communities," the SPLC admitted, "but those are fueled by antisemitism, not separatism." The organization reiterated that Black Separatism is "rooted in valid concerns about how federal and state institutions treat Black people."

Desiring separation from a society that has "historically and systemically oppressed Black communities isn't extremism," the SPLC pressed.

The SPLC reinforced that it was founded to fight against institutionalized racism, acknowledging that while Black Separatist groups can be "virulently anti-white, this prejudice does not represent the same threat as white supremacy in America."

This distinction helps to "dispel any misinterpretations of our understanding of how racism functions in American society," the SPLC penned. "In our endeavor for racial justice and equity, it is imperative that we adopt an understanding of racism grounded in nuance and the realities of racial power dynamics. Racism in America is historical, systemic and structural."

While Black Separatism is the connecting thread of these groups, the movement "doesn't illustrate the hate of their collective ideologies," the SPLC went on, insisting that the placement of Black Separatists on its hate map next to the laundry list of violent white supremacist ideologies assumes the "appearance of an equivalency that does not exist."

The SPLC then noted that White Nationalist groups—which are not categorized as one group but differentiated according to the nuances of their ideologies—are more numerous than their Black Separatist counterparts.

Thus, from now, Black Separatist groups will be classified according to the anti-Semitic, anti-LGBTQ, misogynist, and xenophobic nature of their divisive ideologies that "better describe the harm their rhetoric inflicts" on marginalized demographics by authoritarian leadership.

According to the organization's October press release on the matter, Black Separatists earned their place on the SPLC's hate map "not for their calls for separation," but how "entrenched" these groups are in hateful doctrine.

"We understand that the reclassification is long overdue," stated SPLC chief of staff Lecia Brooks via press statement. "Our goal is to expose these groups without helping to aid law enforcement in its definition of Black Identity Extremists, and this requires a change in tactics as to how we talk about these groups."

The change to the aforementioned hate map was set to be reflected on the SPLC website once the organization released its annual Year in Hate census report in early 2021.

The SPLC also vowed to create another category that addresses anti-Semitism in broader terms, which will not just include Black Separatists, but also Holocaust deniers and other groups that espouse anti-Semitic propaganda.

"We plan to continue our work fighting hate and extremism through partnerships with community organizers and other allies on the ground," the SPLC concluded. "To do this work, we must be specific, accurate and antiracist."

Back in December 2019 after it was revealed that the two suspects connected to the fatal Jersey City kosher market attack also expressed interest in the Black Hebrew Israelite (BHI) movement, the SPLC denoted that the organization has listed nearly 150 BHI chapters as Black Separatist hate groups, "because of their anti-white and antisemitic [sic] beliefs."

The BHI hate groups listed by the SPLC believe in black supremacy and bigotry against Caucasians, Jews, and members of the LGBTQ community. The movement is based on the black separatist theology dating to the 19th century that preaches that people of color are the true children of God and the Lord's "chosen people." Jews are considered "imposters." Others are deemed "devils." Radicals of the BHI ideology believe that those outside the movement deserve slavery or even death.