"Teens can Get PAID $100 to learn about sex ed this spring break in this evidence-based and LGBTQIA+ friendly course led by Austin Public Health!" 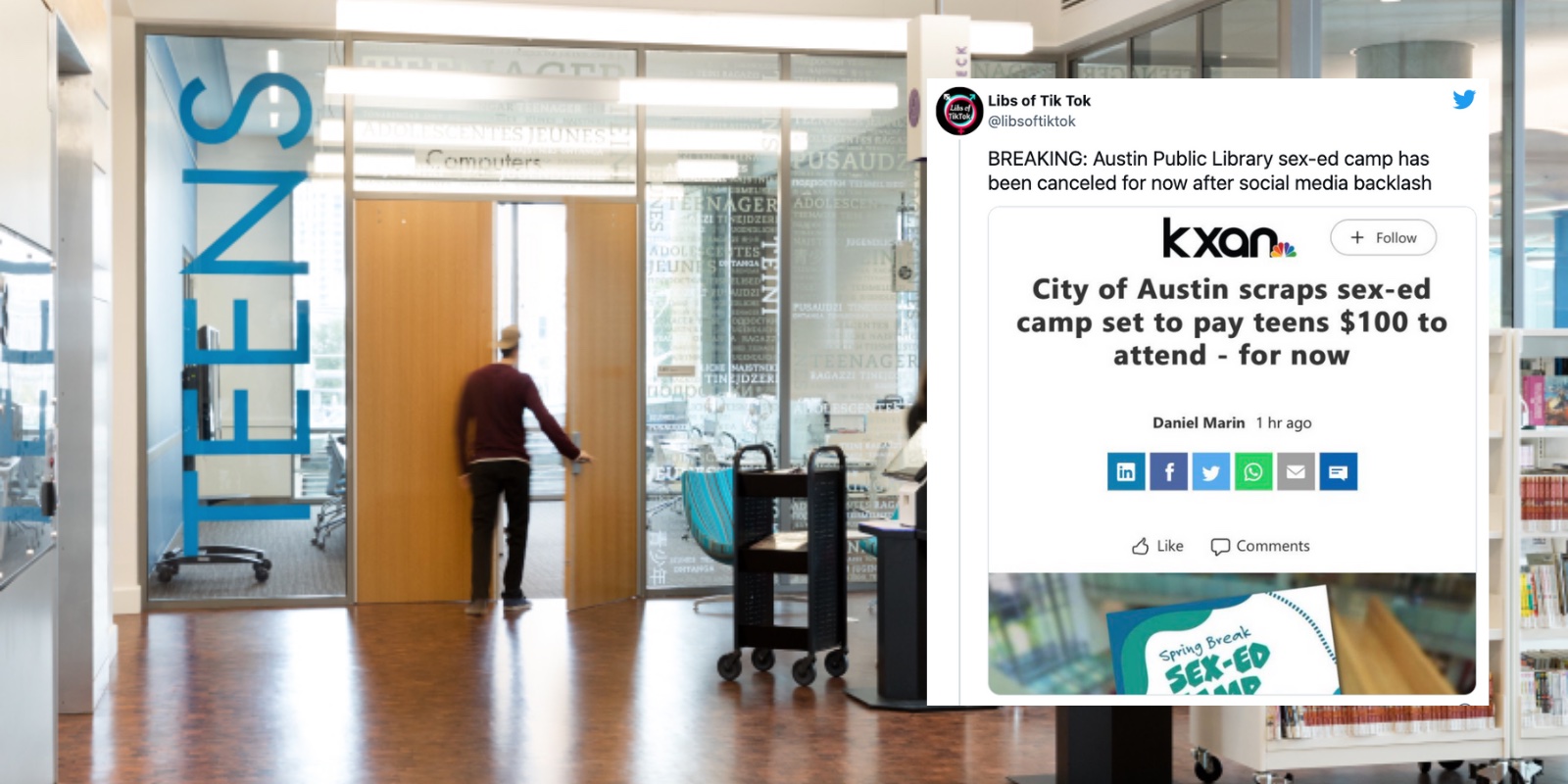 "Spring Break Sex-Ed Camp," which was set to pay teens $100 to attend in Austin, Tx., has been postponed, Austin Public Health told local news. The camp would have taken place at a few locations of the Austin Public Library and the Del Valle libraries, but after backlash, it was postponed.

A post advertising the camp on Instagram received mostly angry and critical comments before it was taken down on Tuesday. Austin Public Health said that the program, called the Austin Healthy Adolescent Program, "has been serving the community since 2013," with the goal of addressing "high rates of unplanned teen pregnancies" as well as sexually transmitted diseases and infections.

The program for teens was intended to run over spring break, beginning March 14, and the camp registration site, which has been closed for now, read that camp "staff use an evidence-based and LGBTQIA+ friendly curriculum used in schools across Travis County," reported The Texan.

The Austin Public Library advertises the program on their website, saying "Teens can Get PAID $100 to learn about sex ed this spring break in this evidence-based and LGBTQIA+ friendly course led by Austin Public Health! Space is LIMITED so sign up now! You don't want to miss it!" But the link to register for the program is inactive.

The Daily Wire reports that the sign-up sheet for the program asked for "preferred 'gender pronouns' and gender identity, giving them the options of 'Male,' 'Female,' 'Transgender,' 'Do not identify,' and 'Prefer not to say.'"

The Austin Health Adolescent Program "envisions a generation of liberated youth and young adults who are valued participants in achieving health equity." The organization lists its values as: "Social justice, self-determination, respect, responsibility, education," and "balancing wellness and action."

Their programs include "Peer-2-Peer," an "intervention" that is designed for teens to "increase their knowledge, skills, and attitudes about healthy relationships while becoming empowered to share this information with their peers." Funding for this program comes from Medicare and Medicaid.

The site for the program links to "Scarleteen - Sex Ed for the Real World," which has exhaustive resources on gender identity, as well as all manner of other advice for sexual encounters and relationships, as well as other sites introducing teens to the wide world of sex and social justice.

Funding for the program came directly from a grant from the Biden administration's Department of Health and Human Services. Over the past two years, HHS has granted Austin more than $1.5 million for a teen pregnancy prevention program.

The Teen Pregnancy Prevention Program, sponsored by both HHS and the Office of Population Affairs, "is a national, evidence-based program that provides funding to implement effective programs and develop, test, and evaluate innovative approaches to prevent teen pregnancy across the United States" that was established in 2010.

The program states that "Despite declines in teen birth rates, almost 172,000 babies were born to young women between the age of 15 and 19 in 2019," and goes on to say that "There are large disparities in birth rates by age, race/ethnicity, and geography, and especially high birth rates among vulnerable youth, including youth in foster care, parenting teens, and LGBTQ youth."

Austin Public Health had planned to hold the camp despite Covid risk factors, saying that should the metrics indicate that in-person gatherings for teens were not safe, the program would be held virtually.

When local news outlet KXAN asked about the program, Austin Public Health issues a statement saying that "Parent/guardian consent is required for participants under the age 18 in this particular health workshop. In order to better refine outreach and effectively approach the teens and their guardians who are in need of and want this education, the workshops which had been scheduled for March in partnership with Austin Public Library have been postponed to this summer."

The Austin Independent School District implemented a new sex-ed program in 2019, which teaches students in 3rd through 8th grade about gender identity and sexual orientation. Kids in 7th grade learn how to use condoms, under the curriculum, and pregnancy options are also discussed.

Parents groups protested the new changes, which were voted in unanimously by the school board in 2019. Their concerns were not with the existence of sex-ed curriculum, but specifically that the curriculum being imposed was not age-appropriate.

Once remote learning was implemented due to the pandemic, the sex-ed curriculum was pulled from lesson plans. Texas Values, a group that opposed the curriculum, threatened a lawsuit against the district if the plans were to go forward.