Stephen Colbert flirts with Barack Obama during lovefest interview: 'I just want to take a moment to drink you in' 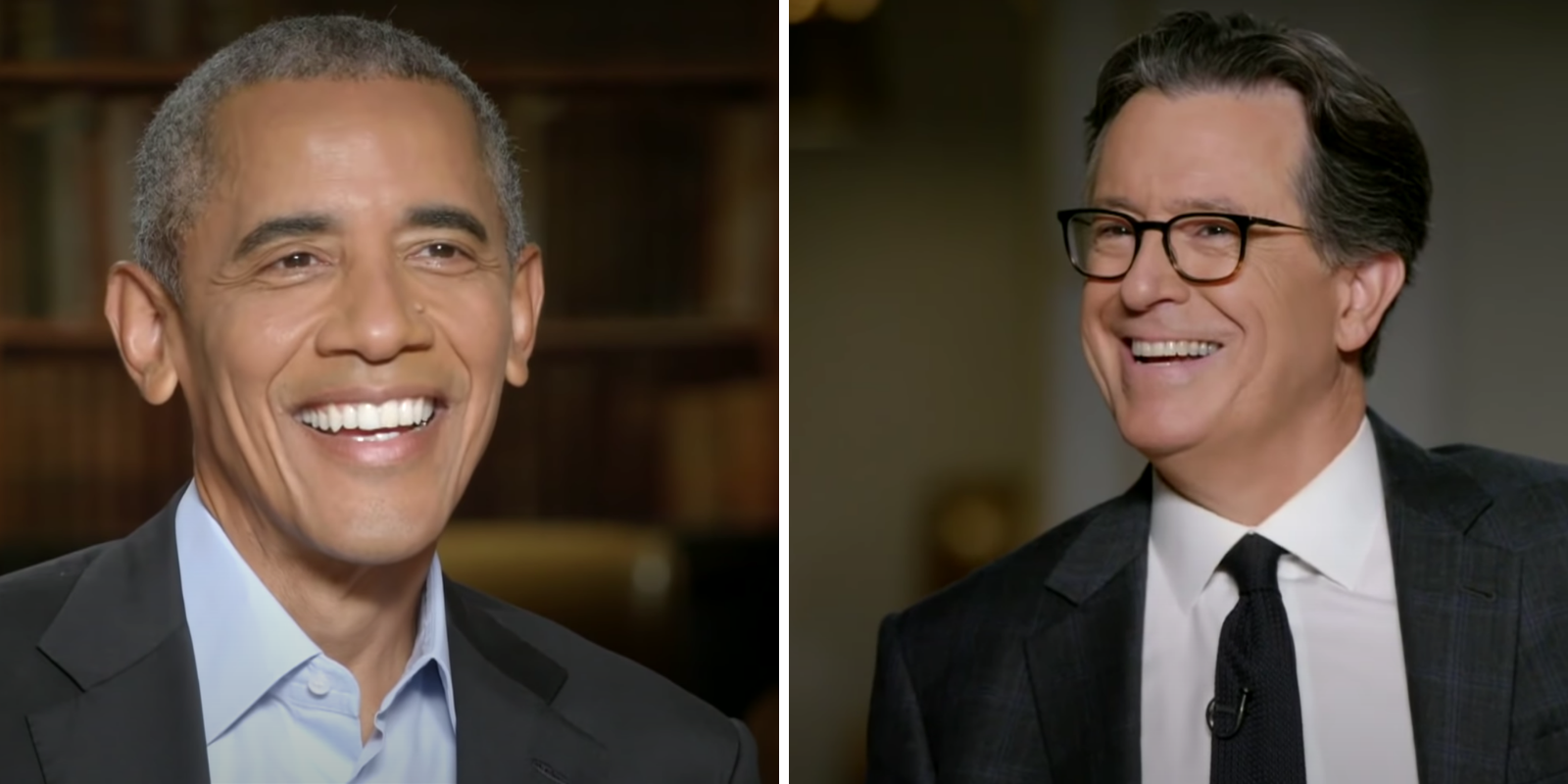 "President Obama, thank you so much for joining me today," Colbert prefaced the ensuing bromance. "It is wonderful to be here. Thank you having me," the 44th president responded.

"That's gotta help the [demographic] in some way," Colbert jested in an aside. "How old are you?" he poked. Obama chuckled. "Are you aged 18 to 54?" Colbert carried on.

The president laughed and replied, "I'm not the demographic you're looking for. It's too late." Colbert quipped: "Sorry it doesn't count. I apologize.

"Michelle says, 'Hey.' You know she loves you." Obama pushed the cringe-filled conversation forward, signaling to the viewers that the pair has history in addition to rapport.

Buttered-up and flattered, Colbert nodded with star-struck eyes. "Good, good. Well, I love really spending some time with her over the last four years," he fawned.

"She adores you. She thinks the world of you. I think you're okay," Obama praised Colbert, granting the host his much-needed attention.

Stuttering, Colbert stated: "Can we just take a moment—and I wanna talk—I just want to take a moment to drink you in." Obama erupted into giggles over Colbert's giddiness.

"Because I'm having to get used to looking at a president again. You know, I've gotten out of the habit. I've gotta warm up for Joe Biden. I don't want to pull anything when I see him take the oath of office. They gotta ease me into this a little bit," Colbert cracked.

Obama agreed: "We've got the potential of returning to a presidency that is actually paying attention and trying to do right by all people and not just some."

Obama made the late-night appearance to promote his new memoir, A Promised Land. However, the two spent much of the wide-ranging interview taking shots at the Trump administration’s handling of the coronavirus pandemic and expressing hope for the nation's future under presumptive president-elect Joe Biden.

"They are going to have big challenges ahead," Obama said of the Biden-Harris ticket. "The fact that he won is indicative of the message he sent of wanting to unify the country. I do think people are exhausted of just this constant cage match. People want to feel like a day passes without it being dominated by something crazy coming out of the White House."

President Donald Trump's predecessor acknowledged that COVID-19 mitigation efforts would be "hard for anyone" on a national scale, but Trump failed by "undermining the leading epidemiologist in the country and saying he’s an idiot, [not] being consistent in terms of masks and social distancing…suggesting that this is some act of oppression, [instead of] a common sense thing to prevent people from getting sick."

"Had we just taken those steps, there is no doubt that we would have saved some lives, and, ironically, the economy would be better because we would not be swinging back and forth the way we have, and people would have more confidence about making day-to-day decisions about shopping," Obama alleged.

According to Nielsen data, the episode featuring Obama resulted in The Late Show’s largest audience in over a year with 3.49 million viewers watching on CBS.