Former Prime Minister Stephen Harper has announced that he will resign from his position on the board of the Conservative Party of Canada’s fundraising arm. 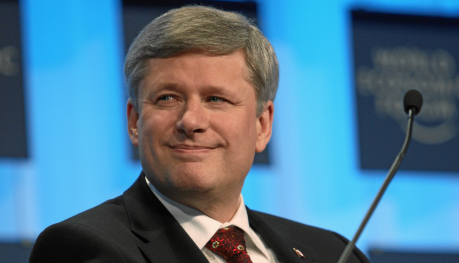 Former Prime Minister Stephen Harper has announced that he will resign from his position on the board of the Conservative Party of Canada’s fundraising arm. The sudden resignation comes amid a scramble for organization within the party according to a recent article in Maclean’s.

Top Conservative sources have told Maclean’s that Harper’s resignation is allow him to block Jean Charest’s campaign for the party leadership. Although the two once worked closely in the early days of Harper’s reign as Prime Ministers they had a falling out over Charest’s use of funds in Quebec. In 2007, Charest transferred $2.3 billion federal dollars to the Quebec government to pay for tax cuts in the hope to increase his chances for reelection. Harper became suspicious of Charest who ran the Quebec Liberal Party for 15 years.

Charest was formally the premier of Quebec and leader of the Progressive Conservative party from 1993-1998. Charest asked Harper for his blessing to run before Christmas but Harper refused, claiming the party of today was not that of the one Charest had lead in the past. Charest is still likely to run and Harper has decided to get involved in the campaign according to sources.

Harper had already been urged to resign by friends and party officials since the resignation of former party leader Andrew Scheer. This comes at the heels of the dismissal of executive director, Dustin Van Vugt, over Scheer’s expenses. Most conservatives had expected Harper to make a quiet exit eventually but instead he resigned this week without notice while on a trip to India. Harper was attending a forum on international relations and security.

The Conservative Fund Canada handles the finances for the Conservative Party. Since the merger was formed between the Progressive Conservatives and the Canadian Alliance back in 2003, the fund has been enormously successful.

“The Fund’s in disarray,” said one Conservative senior veteran.

Despite leaving the fund Harper will remain closely involved with the party one source said. Fund members have to stay neutral during leadership campaigns and Harper wants for more “latitude” than the rule permits another source said.