Support for Liberals down in Quebec, while the CPC inches ahead: poll

Léger president Jean-Marc Léger said if the trend continues, it’s a real threat to the Liberal government in Ottawa. “If he does not consolidate his support in Québec, Trudeau loses power,” Léger told Le Journal. 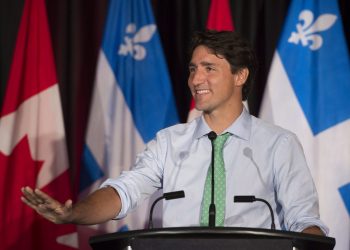 Nearly 70 per cent of Québec voters say that Trudeau bungled the worst scandal his government has faced in SNC-Lavalin as support for the Liberals dropped four percentage points in the province, according to a poll commissioned by French newspaper Le Journal De Montréal.

The Léger Marketing opinion survey found that since February 2—five days before the explosive Globe and Mail story alleging political interference in the Québec firm’s legal fate—the support for the federal Liberals among decided voters fell to 35 per cent.

Léger president Jean-Marc Léger said if the trend continues, it’s a real threat to the Liberal government in Ottawa. “If he does not consolidate his support in Québec, Trudeau loses power,” Léger told Le Journal.

Trudeau first described allegations reported by the Globe as “false” before shifting his position that conversations he and others had with former Attorney General Jody Wilson-Raybould about intervening in the Québec construction firm’s criminal prosecution constituted “vigorous debate.”  SNC-Lavalin stands accused of bribing Libyan officials between 2001 and 2011.

After Wilson-Raybould implicated other high-profile individuals, including former principal secretary Gerald Butts and Clerk of the Privy Council Michael Wernick, the nation’s top bureaucrat, both backed Trudeau in their testimony to the Justice committee.

On March 7, Trudeau faced the media and claimed his former attorney-general experienced their meetings differently and that it was all about SNC-Lavalin jobs that both Butts and Wernick testified could be at risk through a 10-year federal contracting ban the company faced at the trial.

According to the Léger poll, over the same five-week period, support in Québec for Andrew Scheer and Conservatives increased by five points to 26 per cent.

The Léger Marketing poll was an online survey of 1024 voting-age respondents in Québec.