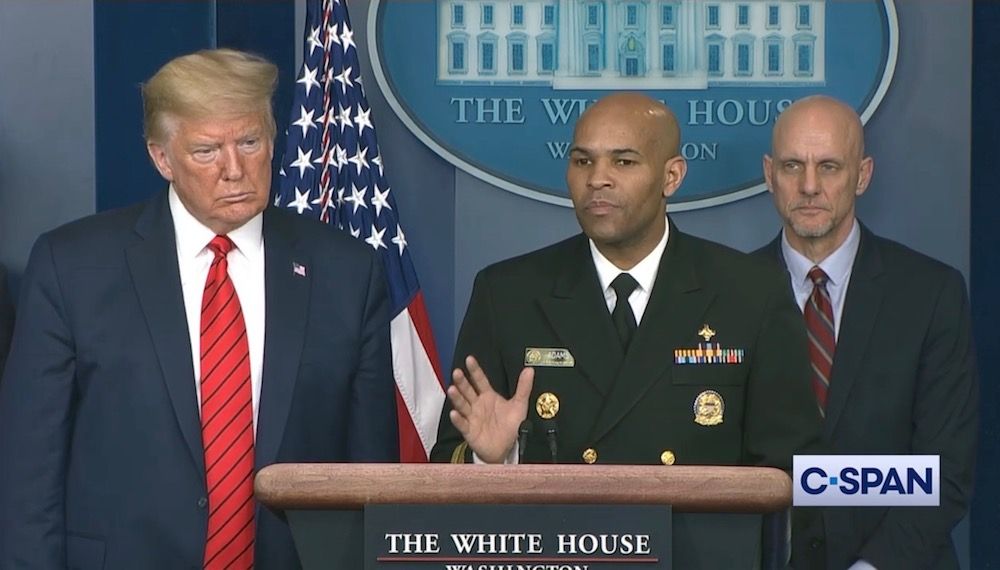 Adams drew criticism from many in the African-American community for his comments directing African-Americans and Latinos to stop drinking and smoking. He suggested that those populations govern their behavior for the sake of “abuela,” “Big Mama,” “granddaddy,” and “pop-pop.” These are all terms that many people of colour use to refer to their elder relatives.

Almost like clockwork, Yamiche Alcindor, a reporter from PBS who has drawn the ire of the president on more than occasion, asked Adams to address his comments.

Adams said he meant no offense and that he, an African-American himself, used the same terms while he was growing up. Alcindor pressed further as to whether or not he would also advise others to not smoke and do drugs. Adams agreed that all Americans need to stop these behaviors for their own health.

The question from Alcindor seemed unwarranted; especially since Adams was addressing the specific issue of the outcomes of COVID-19 infection in communities of colour.

As an African-American, I am aware of my country’s past and present. I know that there is a tendency to be distrustful of government and media. There is a longing for freedom and the ability to make one’s own choices.  I also know there is a sensitivity to critique; especially on a public stage. In the era of social media outrage, this sensitivity becomes more exposed and causes an outpouring of emotional reactions.

After the exchange between Adams and Alcindor, Facebook was filled with angry posts and Twitter screenshots from African-Americans feeling that they have been blamed for the way COVID-19 has affected their communities. However, by not taking the social distancing guidelines and other advice seriously, and by refusing to accept the reality of the nuances at play in favor of anger at a benign and factual comment, more harm than good is to be expected.

Adams conceded that social ills play a large part in the situations that many African-Americans are in and make them easier targets of this disease. What more was he supposed to say?

The uncomfortable truth is that social inequality, in and of itself, did not cause the high rates of comorbidity factors, such as diabetes. Knowing that there are healthy ways to deal with stress, the nicotine addiction that will render the lungs useless to COVID-19 is the product of personal choice.

Not sheltering-in-place or following social distancing guidelines isn’t the fault of systemic bias, but the personal decision to put an immediate desire before a long-term benefit.

I heard no blame in Adams’ statements, but a reiteration of what most of us have heard and learned since childhood: smoking and drug use are harmful habits that are best not begun, and this pandemic is demonstrating why.

There is no doubt that racism is a part of US history. It is pervasive and can be as obvious as the Klansman burning crosses in a front yard or as insidious as doctors not believing or underestimating the pain of African-American patients.  Economic, educational, and employment inequities have relegated many African-Americans to conditions where healthy food is scarce, college is a fantasy, and professional positions that allow remote work are out of reach. Adams noted that “social ills” and stress factors are likely adding to the burden and causing people of colour to be less likely to recover from COVID-19.

Dr. Anthony Fauci backed up Adams' claim, making it clear that disproportionate rates of asthma, hypertension, and diabetes in the African-American community are also issues that can cause poorer outcomes for African-Americans.