Are the Liberals doing everything humanly possible to protect the shareholders and inner elite of SNC-Lavalin and, in turn, their friends in the highest echelons of Canadian power? 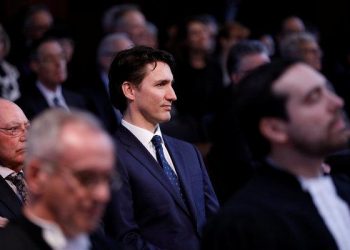 Are the Liberals doing everything humanly possible to protect the shareholders and inner elite of SNC-Lavalin and, in turn, their friends in the highest echelons of Canadian power?

Well, the Liberal government would like you to seriously believe this is all about jobs, or according to a Liberal MP who’s spouse currently works at SNC-Lavalin, nothing wrong occurred at all. They would like you to believe that two ministers, including the former Attorney General, resigned because they wanted to stop 9000 Canadian jobs from being saved.

And perhaps most importantly, that the AG should not be invited back to respond to Gerry Butt’s testimony, because in the words of Liberal MPs it is time, for a ‘shift’ in SNC-Lavalin debate. I suppose the shift is up to no debate.

All of these are problematic statements from the Liberal government because the jobs at SNC are not really at stake, and the company likely does not qualify for remediation because of the extremely deep-rooted history bribery SNC-Lavalin has, alongside the severity of violence the individuals they bribed maintained.

If you’d like to learn more about that, I highly recommend reading the National Observer’s article on SNC and their past problems with bribery and corruption nationwide.

If you want to save time, you can listen to most of the topic being discussed in podcast form here on Canadaland.

So if jobs are not really at stake, and the company really should not receive protection from criminal charges, who really stands to benefit?

Well according to the Globe and Mail’s John Ibbitson, it may be due to the area in which Trudeau grew up and the education which he received.

The elites who govern this country come mostly from the same places – usually a city within the watershed of the St. Lawrence River – and went to the same universities: Western, Toronto, Queen’s, McGill, University of Montreal. They generally live in the same downtown neighbourhoods in Toronto, Ottawa and Montreal, and hold the same progressive but pragmatic views. On the big issues, they usually debate among themselves, reach a consensus, and implement that Laurentian Consensus, as some call it, through their preferred vehicle: the Liberal Party.

Now look, I went to McGill, and also grew up in Toronto and Montreal. The idea that we have a thought process that is separated from the Canadian public at large is nothing new. We continuously brought up just how sheltered we were in our respective bubbles. None the less, it always seemed that the crowd at these institutions could quickly form a specific and all-encompassing view on how the world must run.

On SNC, it seems they reached a consensus that the public prosecutor was wrong, and the decision had to be changed, with the strongest of support.

They made this decision even though, Quebecors at large appear to be distancing themselves from the Trudeau government.

So who really benefits from SNC-Lavalin having a remediation agreement?

Likely the shareholders of a company which previously broke campaign election laws to donate over $100,000 to the Liberal party. In comparison, roughly $8000 was donated to the Conservatives.

This certainly doesn’t look good for the Liberals, and the crony capitalists who seem to support this kind of politics. Especially when you consider that  the OECD’s spokesperson has gone on the record to state Jody Wilson-Raybould’s SNC-Lavalin claims set ‘all alarms sounding.’

I suppose when the Prime Minister stated that his government would do politics publicly, they simply meant that they would try to hide their acts of crony capitalism from the Canadian public, instead of actually trying to put an end to it.

That should be disappointing to every single Liberal who voted in this government on the promise of electoral reform, transparency, and sunny ways.