"We are deeply disappointed by Seattle Public Schools’ masking announcement today which is completely contrary to its prior statements and commitments to its educators..." 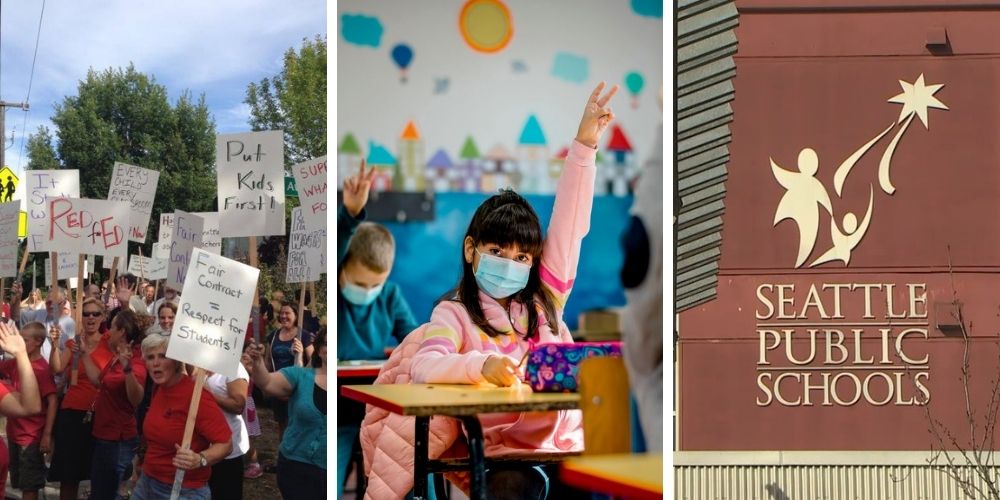 Seattle Public Schools announced Wednesday that they will lift the mask requirement on Monday, March 14.

The move was contrary to an email sent to parents last week obtained by The Post Millennial, which said, "While Gov. Inslee plans to lift the state mask mandate on March 12, 2022, until further notice, the district will continue current mask requirements - requiring mask use by all students, staff, visitors, and others while they are indoors and outdoors at all SPS buildings and on school buses. To change our current masking requirements, SPS and the Seattle Education Association (SEA) must first seek to negotiate a revised agreement/Memorandum of Understanding."

According to Wednesday’s announcement, masks will be optional both indoors and outdoors in Seattle schools and on school buses, however, relief felt by students and parents in response to the announcement may be short lived.

Shortly after the announcement, the Seattle Education Association condemned the school district's decision in their own email to parents obtained by The Post Millennial, writing, "We are deeply disappointed by Seattle Public Schools’ masking announcement today which is completely contrary to its prior statements and commitments to its educators and the community and it is in violation of our contractual MOU with the District."

According to a statement by Jennifer Matter, President of SEA, and Uti Hawkins, Bargaining Chair of SEA, "Making announcements without answers to common questions and without consultation with those having to implement changes erodes SPS’ credibility.  This type of chaos, confusion and distrust directly leads to educator burnout and to educators leaving the District and the profession. The City of Seattle is continuing masking for its employees and visitors through April 4.  SPS did not have to make a rash decision."

After posting the message to Facebook, the union limited comments after backlash from parents.

The move is no surprise coming from the teachers’ union that had previously stated:

"In our experience, universal required masking has been our most important in-classroom and in-building mitigation measure during this pandemic. Our students and educators have been wearing masks in schools for over a year now, and it has become routine and accepted."

"In fact, masks contribute to feelings of safety and normalcy that schools provide our students. Further, removing the mask mandate now fails the many students and educators who are immuno-compromised or pregnant, who live with someone who is, or who live with children under age 5 who cannot yet receive a vaccine. A large number of children under 12 remain unvaccinated with disproportionately higher numbers of those living in our more socially and economically diverse communities."

"It is important that with masking changes the voices of those most vulnerable to COVID be heard, Educators and Students alike. Their needs are historically dismissed in hasty moves to normalcy. The severity of their risk should never be lost in our transitions and SEA will ensure their concerns are seen for discussion through our labor negotiations."

In a letter obtained by The Post Millennial to the directors of King County Public Health from representatives from the Seattle, Highline, Renton, Shoreline, Federal Way, Bellevue, Kent, Tukwila and Lake Washington school districts’ teachers' unions and various other associations, representatives begged Director Worsham and Dr. Duchin, to maintain "…a masking requirement until at least May 1 (approximately two weeks after spring break)."

Before Wednesday's announcement that masks were optional beginning next week, in a statement last week, Seattle Public Schools said, "Future decisions on mask use within the district will be made in partnership with public health, and its implementation will be established after consultation and mutually agreed upon guidelines that are reached through bargaining with our labor partners."

The union attempted to capitalize on the reference to local public health agencies and joined other King County teachers’ unions in asking King County Public Health to require masks be recommended as a requirement in schools through May 1.

The letter claimed that "Removing the mask mandate now fails the many students and educators who are immuno-compromised or pregnant, who live with someone who is, or who live with young children under age 5 who cannot yet receive a vaccine. And, as you know, there continue to be a large number of children under 12 who are unvaccinated with disproportionately higher numbers of those living in more socially and economically diverse communities. We are raising our concerns because we believe prematurely allowing the mask requirement to expire in King County schools could cause serious harm."

"First, we believe it could result in significant anxiety for many students, families, and educators, and exacerbate rather than help with the mental health crisis for them."

The reps then pivoted to claiming that removing the masks is racist. "Second, we believe the negative impacts of lifting the mask mandate would be most heavily felt by our [b]lack, Indigenous, and [p]eople of [c]olor communities as well as by people with disabilities." Ironically, the union reps failed to mention acknowledge children with disabilities, whose progress has been stymied for two years.

Despite over 40,000 students fleeing the public school system in the state, the reps claimed in the letter that "…we believe it (removing masks) could result in a significant number of students and/or educators choosing to go on leave, which would worsen our current educator staffing shortage and unusually high number of student absences."

Last week, when Democrat Governor Jay Inslee announced the rollback on Monday, many parents were curious why the Governor stressed that he would fight and protect Washingtonian's personal choice to continue masking. He even went so far to say that it was one of the reasons he was not relinquishing his emergency powers which he has had for over two years. Those same parents, after finding out about the letter, were quick to draw a line from Inslee's comment to the teachers' unions.

A group of students calling themselves the Seattle Student Union released a statement condemning the Seattle Public School district’s decision to unmask on Monday. They called the removal of the mask mandate a "…highly political tactic, to keep elected officials in office" and said they plan on staging a walkout if the removal stays in place.