The senator said "We need real congressional oversight. We need hearings, we need subpoenas. I believe Congress should impeach Alejandro Mayorkas, the secretary of Homeland Security." 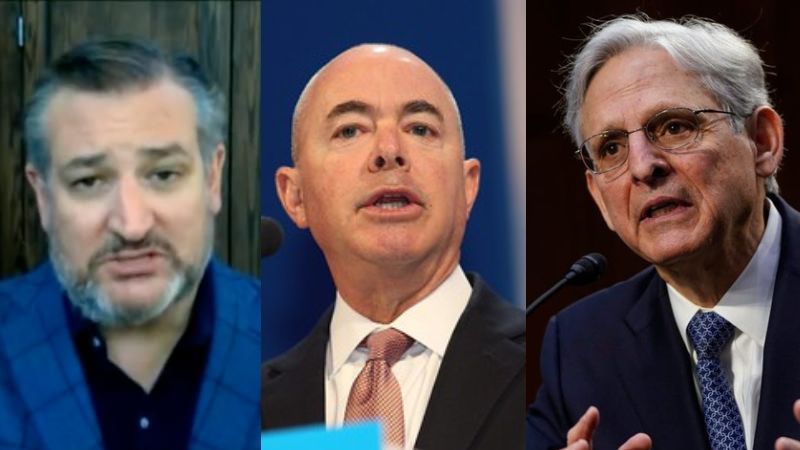 When talking about the Biden administration's open border crisis on Eric Bolling's The Balance, the senator said "We need real congressional oversight. We need hearings, we need subpoenas. I believe Congress should impeach Alejandro Mayorkas, the secretary of Homeland Security."

Cruz's sentiment reflects that of a letter he sent to Mayorkas in early October, alongside South Carolina Sen. Lindsey Graham. The letter was to warn Mayorkas that his "gross dereliction of duty" in regards to the mismanagement of the southern border could be "grounds for impeachment."

"Your failure to faithfully enforce this nation's immigration laws and willful blindness to the very real humanitarian crisis at our southern border amounts to a gross dereliction of duty and a violation of your oath of office. Historically high levels of illegal immigration and illicit drug trafficking demonstrate that our southern border is open for every kind of public health and national security threat imaginable. Despite the heroic efforts by the men and women of Border Patrol, who operate with very little support from Washington, D.C., you have failed to achieve any semblance of operational control of the southern border. We have grave concerns about what this failure means for both national security and the health and safety of American citizens. These failures cannot go unaddressed, and your actions cannot be unaccounted for. The American people deserve better."

"This is gross dereliction of duty and, if not corrected swiftly, could provide grounds for impeachment," they added.

Cruz went on to tell Bolling that Biden-appointed Attorney General Garland should be impeached as well.

On Friday, Garland was implicated in a 1000-page report from the House Judiciary Committee, detailing allegations of misconduct and political bias within the Department of Justice and the FBI under the Biden administration.

According to the report, "The Federal Bureau of Investigation, under the stewardship of Director Christopher Wray and Attorney General Merrick Garland, is broken."
ADVERTISEMENT
ADVERTISEMENT
CruzMayorkasGarland