Texas Representative sets CNN host straight on the use of whips, lassos by Border Patrol agents

"That's not a whip, that is not a lasso. They do not carry that. That seems to be the reins from the horse itself," said Representative Henry Cuellar. 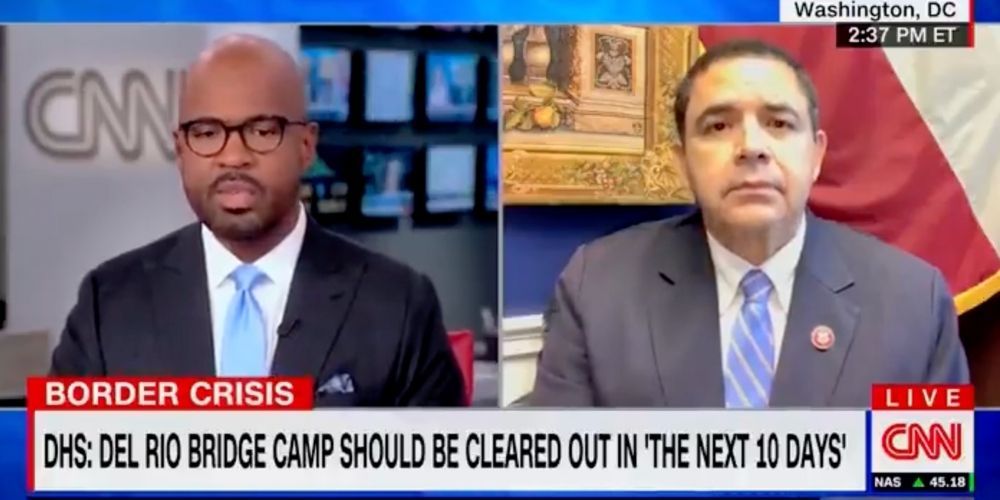 Following footage that was released showing Border Patrol agents rounding up migrants at the southern border, Democratic Representative Henry Cuellar of Texas set a CNN host straight on what the footage does and does not show.

"Let me ask you about some of the images we're seeing of border guards on horseback chasing or charging migrants on these horses. At least one appears to use what looks like a rope or lasso. And these are Haitians who have crossed into Mexico to buy food and ice because that's running out under the bridge and then cross back. What's your reaction to what you're seeing here?" asked CNN's Victor Blackwell.

"Well, you know, certainly, we got to make sure we treat all the immigrants with respect and dignity. But I will say this. Border Patrol has had those horse brigades for a while, they've had them for a while, number one, number two, they don't carry whips. And they do not carry lassos. I think the picture you're talking about, at least the one I've seen is the rein, the rein of the horses," responded Cuellar.

The questioning from Blackwell comes as many officials mistakenly said that Border Patrol agents were using whips on the Haitian migrants they are attmepting to move out of the camp in Del Rio. The pictures in question show riders using split reins, a type of long rein typically used in western horse tack.

"So it should be used should even if it's a rein?" Blackwell asked.

"Well, again, if there was a problem, it should be investigated. And I think that's it, but we cannot paint the Border Patrol with the same type of paintbrush. Look, you know, what are they supposed to do?" asked Cuellar. "Just stand there and let everybody come in? You know, they're supposed to be enforcing the the law, but again, as to how you enforce the law, you've got to make sure you treat people with dignity and respect."

"Yeah, but does forcing the law require what you're seeing there? Is that the way people should be treated?" Blackwell pressed.

"Yeah, again, that incident will be looked at. But again, that's not a whip, that is not a lasso. They do not carry that. That seems to be the reins from the horse itself," said Cuellar.

"You're creating a distinction between swinging a rein at someone versus a whip. I don't know that, as we heard from the White House that they make that distinction," Blackwell noted.