The Thousand Islands Bridge, which had been closed down due to a blockade from people protesting the Coastal GasLink pipeline, has been reopened. 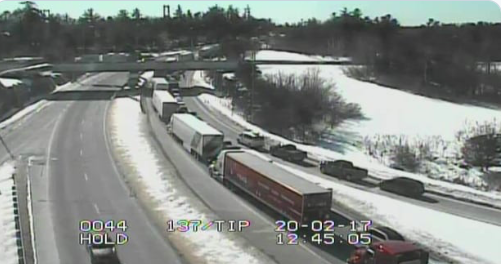 The Thousand Islands Bridge, which had been closed down due to a blockade from people protesting the Coastal GasLink pipeline, has been reopened. The bridge is located in Gananoque near Kingston Ont.

The bridge allows access to US from Canada however both ways had previously been restricted due to the protests. The traffic restrictions were lifted as of 3 p.m. Monday.

Many commuters were stuck at the border for such as Dan Vance who told Global News he was halted for 45 minutes on his back from the U.S. The 59-year-old was in Canada customs paying taxes when he was delayed.

“Hopefully, it’s no more than an hour or two but right here, this time of year, right around the Thousand Islands nothing is opened because it’s wintertime,” Vance said.

“I’m hoping there’s no emergency where an ambulance or a firetruck has to get through.”

Vance said there were about 30 cars backed up behind him as well as many who just turned around and drove back into the U.S.

The railway blockages and protests have been happening for the last three weeks in solidarity with the Wet’suwet’en hereditary chiefs who oppose the pipeline.

The elected Indigenous councils have already signed an agreement with Coastal GasLink to approve the route however some hereditary chiefs oppose it and claim to have rights over the unceded land.

Niagra Falls, Ont. and Niagra Falls, N.Y. also had a group of protestors shut down the border crossing however they left on Sunday of their own accord.

There are other protests currently happening throughout the country.