A TikTok star became the most recent victim of attacks carried out by Portland Antifa. 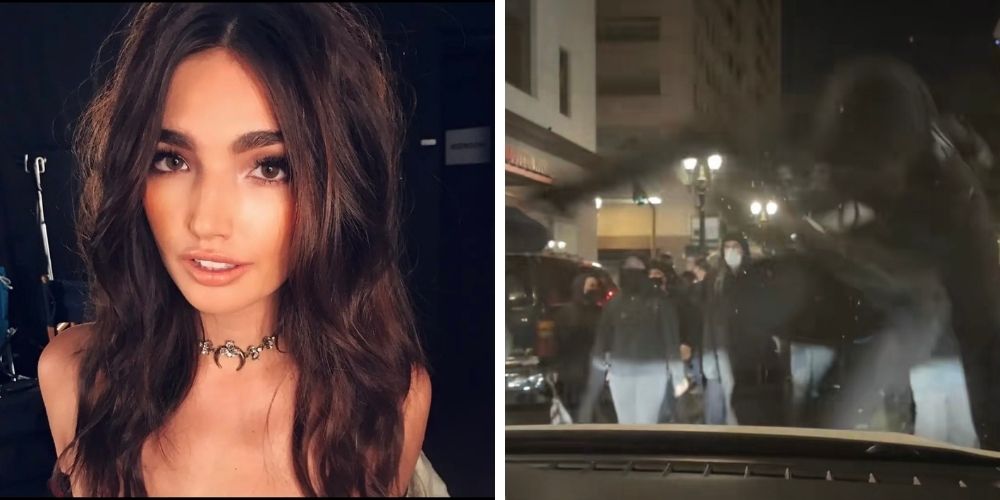 A TikTok star became the most recent victim of attacks carried out by Portland Antifa when a mob dressed in all black attacked her family's vehicle on Monday as they were driving home from Fourth of July celebrations.

Hailee Lautenbach posted a video of the incident to her TikTok account, which has since amassed over 3.5 million views.

The harrowing video shows dozens of black bloc Antifa approach the family's vehicle after they were forced to come to an abrupt stop due to the extremist group taking over the roadways in downtown Portland for an Independence Day protest.

"Are they peaceful?" Lautenbach asked, as the mob of Antifa approached the vehicle, according to the video.

Within seconds of asking that question, an Antifa militant jumped on the hood of their car and smashed the front windshield with their boot, breaking the glass.

One of the extremists in the group followed shortly behind and took a photo of Hailee and her family, a common tactic that Antifa uses to doxx their victims.

Frustrated with the Portland Police Bureau's inability to respond due to the department's ongoing staffing crisis and the city's increase in crime following the "defund the police movement," Lautenbach called out elected officials on Twitter and said, "Are you going to do anything about this, cause the cops sure just said 'we know there's a lot happening out there, stay safe.'"

"To take advantage of July 4th, #Antifa carried through on a preplanned riot. They tried to set the federal courthouse on fire then smashed up businesses and cars in a rampage. They assaulted people as many were in downtown for the fireworks show. Police made no arrests," Ngo reported on Tuesday.

According to Ngo, Antifa boasted about taking advantage of strained police resources during the holiday as they rioted through downtown Portland smashing windows to businesses and terrorizing workers inside.

"Downtown could have burned to the ground tonight and the police wouldn't have responded," an Antifa account said on Twitter.

A KOIN News reporter said that the far-left extremists maced a civilian and assaulted a hotel security guard as they mob continued on their rampage. The group also vandalized Portland City Hall and held a flag burning ceremony at the Veteran's Memorial in Lownsdale Square, across from the federal courthouse and the Justice Center. The memorial was also vandalized.

The violence by Antifa in Portland on the night of July 4 was so extreme that Portland-based Black Lives Matter activist Danielle James posted a video on social media expressing her disgust, journalist Andy Ngo reported.

Antifa members that were part of the violent mob that attacked vehicles, set off explosives, smashed windows to businesses, and assaulted innocent bystanders defended their actions on Twitter and lied about their victims trying to kill them.

"People tried to kill us with their cars last night. We defended ourselves. No apologies," an Antifa member said on Twitter.