The timeline shows that the violence at the Capitol building began 20 minutes before Trump finished his speech that Wednesday afternoon. 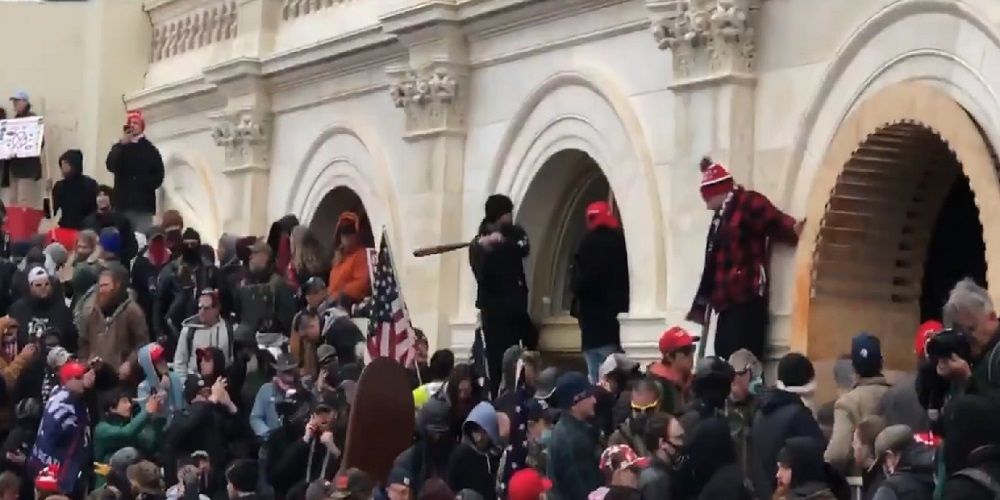 The New York Times compiled video footage with time stamps to document nearly every moment of Jan. 6 siege of the Capitol building in Washington D.C.

The timeline shows that the violence at the Capitol building began 20 minutes before Trump finished his speech that Wednesday afternoon.

The vital events of that day took place in an approximately two hour period from roughly 1 pm to after 3 pm.

The President delivered a speech to his supporters at a rally dubbed the "Save America March," from the ellipse in front of the White House. The speech lasted about an hour.

Roughly 20 minutes before the end of his speech is when scuffles began to break out between protesters and police on Capitol Hill, according to the NYT's timeline.

Police could be seen about 1 pm holding off groups of violent protesters pushing up against the thin police line in front of the Capitol steps. This was when the first police barriers were reportedly breached by the mob.

The President called for his supporters to march to the Capitol at least twice during his speech, and masses of his supporters could be seen migrating across the National Mall from the White house to the capitol while he was still speaking.

Meanwhile, the Senate and the House were gathered inside the Capitol to vote to certify the electoral votes to bring Joe Biden in as president, still unaware of what was occurring outside.

Several police barricades were lost to the mob after 1 pm as the police line constricted closer to the outer walls of the Capitol building. By 1:50 pm Chief Steven Sund of the Capitol Police called on the DC National Guard for support.

The mob relatively quickly pushed the police line up the steps to the doors of the Capitol. Between 2:11 pm and 2:16 pm the building was breached and the rioters entered the Capitol.

Rioters were seen entering through doors as well as climbing through broken windows to reach the Capitol's interior. Police were chased by rioters up stairways until police lines formed within the building to stave off the mob.

Congress was put into recess and some members were evacuated while others were trapped inside and sheltered-in-place.

Clashes within and outside the building continued over next three hours until the building was secured. During this time, an unarmed female rioter, Ashli Babbit, was shot inside the capitol building by law enforcement. She later died from her injuries.