The second “March for Freedom” took to the streets of Toronto on Saturday. Organized by The Line Canada but attended by people with a host of different beliefs, they marched for the common purpose of ending COVID-19-induced restrictions across the country. 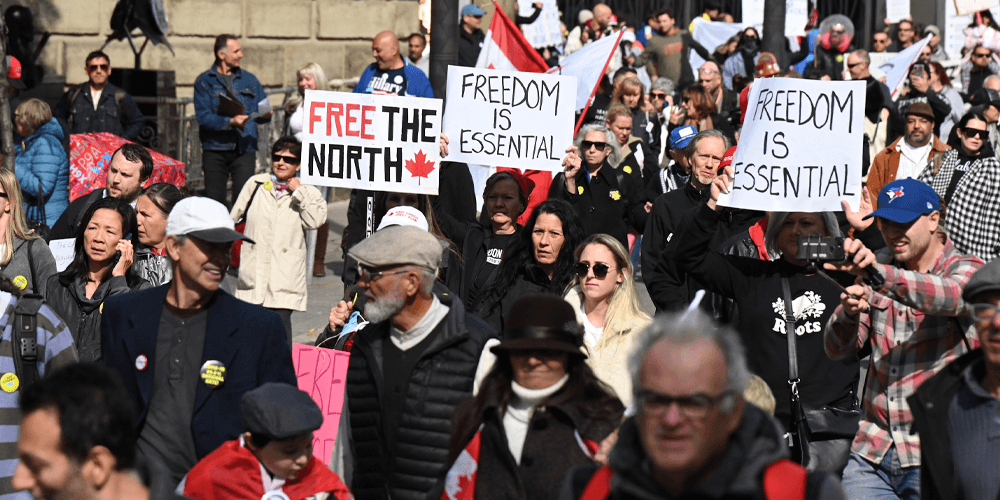 The second “March for Freedom” took to the streets of Toronto on Saturday. Organized by The Line Canada but attended by people with a host of different beliefs, they marched for the common purpose of ending COVID-19-induced restrictions across the country.

Mainstream media outlets were largely absent from the previous event, and downplayed numbers as being around or over 100 people when the actual number in attendance was closer to 3000. When asked about this discrepancy, media liaison George said “As is the case with mainstream media who have been downplaying expert scrutiny, they similarly want to to diminish the validity of our protests.”

People’s Party of Canada leader Maxime Bernier was in attendance. Speaking to The Post Millennial, when asked why he felt it was important to support the protestors, Bernier said “The Second Wave is here, right across the country. But it is a second wave of more socialism in our country with the Trudeau government spending money that we don’t have.”

He added that “People are looking at their future, and the future is not bright.”

The march passed by CBC and CTV, and protestors took the opportunity to express their strong distrust for mainstream media. “You’re a bunch of cowards! Tell the truth!” protestors could be heard screaming.

According to the current provincial guidelines, outdoor gatherings are now capped at 25 people. When asked if he’s afraid of getting ticketed, Daigle said “As an organizer, if we get ticketed, we will fight the ticket in a precedent-setting class action suit. Once that opens up, they can’t go back.”

One protester, Nini, said “We have a right to protest, unlike in my own country. Whether you agree or disagree, we’re allowed to be here. You can’t protest in Egypt—you’ll get shot or go to jail. The end. Here, it’s ok if we disagree.”