While Trudeau’s itinerary ended at 6pm with media availability, he was later seen attending a party with stars like former Mythbusters co-host Adam Savage and Hayden Christiansen of the Star Wars series. 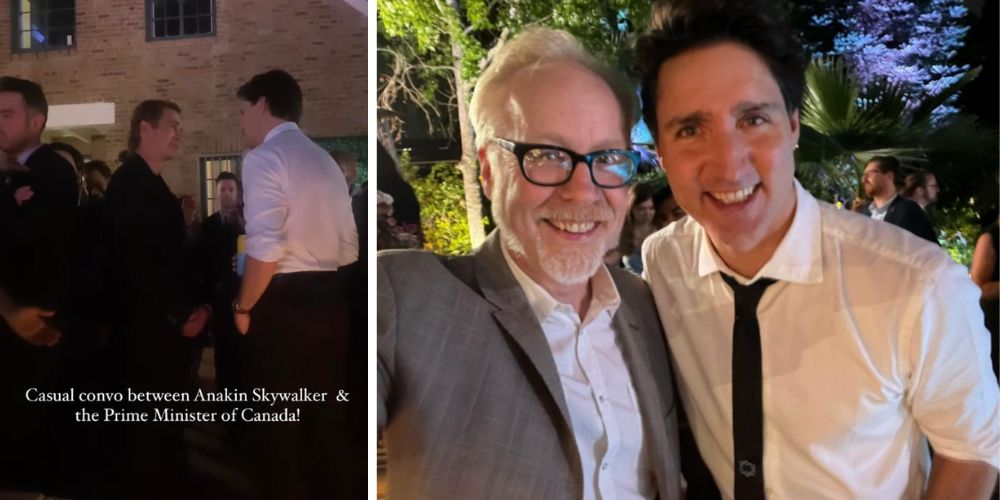 Following the conclusion of the Summit of Americas in Los Angeles, Prime Minister Justin Trudeau was seen attending a lavish party at the Consul General’s House in the city.

While Trudeau’s itinerary ended at 6pm on the last day of the summit with media availability, he was later seen attending a party with stars like former Mythbusters co-host Adam Savage and Hayden Christiansen of the Star Wars series.

Around an hour before the event kicked off, Arwen Windmer Bobyk, a Canadian diplomat based in Los Angeles, posted to her Instagram story a video of the backyard where the event took place, complete with a pool, multiple bars, and maple leaf signs.

"T-minus 1 hour until we celebrate PM Justin Trudeau’s successful visit to the IX Summit of the Americas," she wrote.

She also posted a photo of herself with Trudeau, writing, "Finally got my us-ie with PMJT! What an incredible week of advancing the values of equity and inclusion so intrinsic to Canadian foreign policy. It was an honour to be the [Canadian] Visit Team Lead for the IX Summit of the Americas!"

Trudeau was seen in Instagram posts chatting with Christiansen as photographers looked on and Justin Bieber played in the background.

Another photo showed that Iman Vellani, who is playing Ms. Marvel, the first Muslim superhero, as well as Oscar-winning filmmaker Ben Proudfoot, who brought his award with him which people posed with, appearing at the party.

Savage posted a selfie on himself and Trudeau to Instagram, stating "Had a truly lovely evening in LA last evening with an old friend. Canada and Canadians are a gift to the world!"

The post was met with a majority of negative comments, with people blasting the prime minister for being a "fascist dictator," and others joking that Trudeau should have done a "blackface routine," referencing the numerous past photos of the prime minister being dressed in racist attire and makeup.

Erika Savage, who works as Global Music Operations for UTA Music, was also seen taking selfies with the prime minister, and posted a portion of Trudeau’s speech at the event.

"And Canada is one of those places in the world that has figured out, not perfectly but better than most, how to draw on differences and make them a source of strength," Trudeau was heard saying.

Trudeau was seen wearing his "Order of the Unified Hearts: tie, which. He had previously worn in 2017 to a tribute to songwriter, signer, and poet Leonard Cohen.

"I established this Order of the Unified Heart, that is a kind of dream of an order. There is no organization. There’s no hierarchy. There’s just a pin for people of a very broadly designated similar intent," Cohen had said in a 2007 interview describing the symbol.

Trudeau has been in the US to attend the ninth annual Summit of the Americas, where the day before this party, Trudeau held a joint press conference with California Governor Gavin Newsom that focused on the joint efforts of the country with the state to fight climate change.

In this press conference, Trudeau named the American Republican Party as a source of interference as to why more hasn’t been done at the federal level to fight climate change.

"We've seen it over the years, where a federal government is unwilling or because of logjams in this case, Republican interference, unable to actually move forward on the type of climate leadership that's necessary, state governments and cities step up.

Trudeau’s visit comes as Canadians experience record high gas prices at home, and following the Prime Minister’s announcement of his intention to freeze nationwide the sales of handguns.