Trudeau says Canada has enough to give everyone FOUR DOSES, if necessary

The CEO of Pfizer even recently said that it isn't yet clear if a fourth dose of vaccine is even necessary. 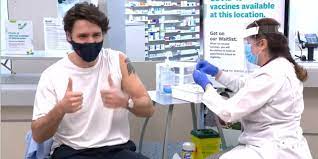 Prime Minister Justin Trudeau ensured Canadians that there are enough doses of COVID-19 vaccine for a fourth dose, if and when those doses will be necessary.

According to a statement from Trudeau to provincial and territorial leaders, Canada has secured enough shots for not just a third round of vaccination, but a fourth.

According to The Canadian Press, Trudeau's statement says that the federal government will do what it can to ensure the provinces and territories deal with the fifth wave of COVID.

A fourth dose has already been introduced in countries such as Israel.

As reported by the Times of Israel, 250,000 people have already received a fourth vaccine in the country of just 10 million, though Israeli doctors have said that for many, three will be enough.

The CEO of Pfizer even recently said that it isn't yet clear if a fourth dose of vaccine is even necessary, saying that a specifically made vaccine more fit for the Omicron variant would be ready by March.

“I don’t think we should do anything that is not needed.”