Prime Minister Justin Trudeau is committed to going to war against Fake News, and says that his government is looking to hold companies for spreading misinformation, going so far as to say that those who don’t play by his rules would face “meaningful financial consequences.” 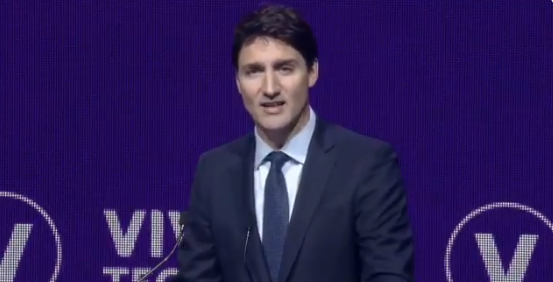 Prime Minister Justin Trudeau is committed to going to war against “fake news,” and says that his government is looking to hold companies for spreading misinformation, going so far as to say that those who don’t play by his rules would face “meaningful financial consequences.”

“The platforms are failing their users. And they’re failing our citizens. They have to step up in a major way to counter disinformation, and if they don’t, we will hold them to account and there will be meaningful financial consequences,” he said at the Viva Technology conference in Paris on Thursday.

The Christchurch call was signed two months to the day after the Christchurch Mosque attacks in New Zealand, where 51 people were killed, all while being live streamed on Facebook.

“It’s up to the platforms and governments to take their responsibility seriously and ensure that people are protected online. You don’t have to put the blame on people like Mark Zuckerberg or dismiss the benefits of social platforms to know that we can’t rely exclusively on companies to protect the public interest,” said Trudeau.

Trudeau announced that Canada would be launching a digital charter, “touching on principles including universal access and transparency and serving as a guide to craft new digital policy.”

Along with those statements, Trudeau also announced that his own government would be releasing a list of “approved” news organizations.

With more and more steps being taken to tackle extremism, some wonder if it will tread toward censorship. With the path to hell being paved in good intentions, it can be worrying to many to see such action taking, actions which could stifle free speech.

With federal elections breaking the horizon, Trudeau said the government was taking steps to eliminate fake news, and that there would be a new task force created used to identify threats to the election and to prevent foreign meddling.

Who signed the Christchurch Call?

A total of 16 countries, along with eight tech giants signed the Ardern-led effort to curb extremism online.

France, Canada, Indonesia, Ireland, Jordan, Norway,  Senegal, the UK, Australia, Germany, Japan, India, the Netherlands, Spain, and Sweden have all signed the Call at this week’s summit in Paris.

Notably, the United States did not sign the pact, citing a concern that it could impact first amendment, freedom of speech.

“We can be proud of what we have started with the adoption of the Christchurch Call,” said Ardern. “We’ve taken practical steps to try and stop what we experienced in Christchurch from happening again.”

What do you think? Is Trudeau doing the right thing? Let us know in the comments below.