Trudeau to pay more than $400,000 to compensate Quebec residents for border disruption

Quebec residents living near the Roxham Road border with the United States are set to receive more than 400,000 to share between them, in order to compensate for the increased traffic and noise. 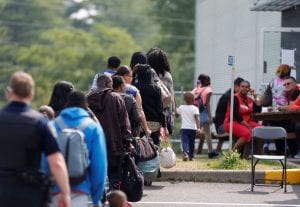 Quebec residents living near the Roxham Road border with the United States are set to receive more than $400,000 between them, as compensation for the increased traffic and noise.

According to an Ottawa Citizen article, “an order paper tabled by the federal government last month projects 45 households near Roxham Road will divide up $405,000, with individual compensation based on each home’s proximity to the border.”

The federal government has put forward up to $485,000 for the payments, which includes a contingency fund for other potential homeowners near the Roxham area.

Those who illegally crossed the border to apply for asylum cost the federal government on average $14,321 each. Many have pointed out that coming from the US to claim asylum is against the Safe Third Country Agreement.

That agreement states that individuals must apply for status in the country they arrive, rather than shopping for their preferred country of choice. It has faced such intense scrutiny, that the federal government now intends to renegotiate it with their American counterparts.

More than 95 per cent of all migrants who have crossed illegally into Canada since 2017 have done so at Roxham Road. A loophole in the Safe Third Country Agreement has created a literal hole in the border, and possible solutions have been ignored.

“With the recent influx of asylum seekers to Canada, the Safe Third Country Agreement is no longer working as intended,”

“Asylum seekers are evading the Canada-United States Safe Third Country Agreement by crossing into Canada between ports of entry where the agreement does not apply. This has brought to our attention gaps that may be creating a pull factor for people to cross illegally into Canada.”

As a result of the number of crossings, it appears the Canadian refugee system is beginning to slow down and become expensive.

According to the Immigration and Refugee Board of Canada, since
February 2017,  38,646 individuals have been taken in.

Of that number 4,447 have been accepted, 3,751 have been rejected, and roughly 1000 individuals have withdrawn or abandoned their application.

29,322 individuals, or roughly 75% of the total number taken in are still awaiting a potential response.

No wonder the federal government is compensating Canadians stuck sitting through this slow mess. They likely expect it to continue on for the foreseeable future.

Unfortunately, no government program could compensate Canadians for the federal government’s mismanagement of this, and many other issues.

What do you think about this compensation? Join the conversation by commenting below!