Trudeau's choices in the defence of Quebec's religious symbols

In a thorny battle, the quietude of the federal government has been rebuked. 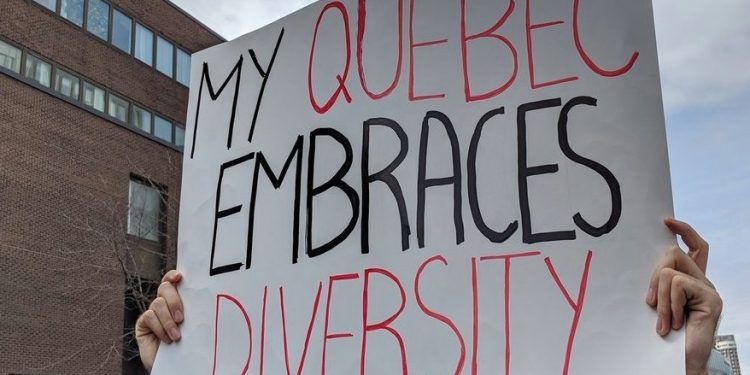 Quebec’s decision to legislate against the wearing of religious symbols by public sector employees was immediately met with a court challenge. However, long before the bill was passed, it had been a centrepiece of Quebec political discussion.

The recent lawsuit contends that the bill’s passage is unconstitutional, likely to cause “irreparable harm to religious minorities.” According to the parties opposing the bill, attempts to dictate that provincial workers cannot wear religious garb effectively “excludes visibly religious individuals from participating in a range of important public institutions.”

One such individual is a plaintiff in the case, a Muslim education student. Like many others, she has stated publicly that “the decision to wear a hijab was mine and came from me. The decision to remove it should also come from me, not the government … this law has cut off my wings.”

This pushback comes from within the province and has been generated by organizations like the National Council of Muslims and the Canadian Civil Liberties Association who launched the recent legal challenge. Impassioned protests and demonstrations have been otherwise provoked from within school boards, municipalities, and religious organizations.

However, in the thorny battle against “Bill 21” (as the law is commonly called) invested parties have rebuked the quietude of the federal government.

“If our political parties aren’t able to condemn this curtailment of freedoms, then I think that is a real disappointment for the millions of people in this country who believe that Canada is a democracy where we all have the right to practice our religion and have freedom of expression.”

Balpreet Singh from the World Sikh Organization of Canada has also lamented that the Trudeau administration did not “come out strongly” on the bill.

“The strong reaction we expected from our politicians has not been there,” observed Singh.

Indeed, it is true that Prime Minister Justin Trudeau has been limited in his comments thus far. In his one and only public statement, he articulated his commitment to protecting minority rights.

However, the Trudeau government has yet to publish a plan of action going forward, and It is unclear whether his words have any weight. Of course, it bears noting that the nature of this Quebec-born piece of legislation has made it difficult to challenge.

The possibility of a federal challenge to Bill 21

Specifically, the bill makes use of the “notwithstanding” clause, protecting it from certain sections of the Charter of Rights and Freedoms. Its challengers have had to be creative insofar as their legal quarrels with the law are concerned.

The current case contends that while Bill 21 cannot be stopped on the basis of its subversion of religious freedoms, the province’s overreach into criminal law, the vague definitions of religious symbols, and the violation of minority rights which, in the past, has been viewed as a separate constitutional principles,. These offer a possibly winning legal argument but by no stretch of the imagination a certain victory.

Nevertheless, ongoing challenges and notwithstanding clauses should not imply the federal government has no power or, for that matter, reason to intervene.

“There’s a lot of options open to the federal government,” Kerri Froc, an Assistant Professor of Law at the University of New Brunswick told The Post Millennial. “One option is the power of disallowance… whereupon the Governor General may ‘disallow’ provincial legislation.”

However, the power of disallowance was last exercised in 1943, making it a somewhat antiquated resort. The legal tool is—or at least, was once—a mechanism to be employed when provincial legislation goes against national policy, or encroaches federal power.

“Some academics question whether the power could still be used” or “whether using it would accord with the unwritten constitutional principles of federalism,” added the professor.

It can otherwise be argued that Bill 21 violates the division of powers between provincial and federal governments. Cases before the enactment of the Charter offer possible justification for this position.

“[S]ome judges [have] suggested that it was beyond the scope of provincial power to enact laws that contravened freedom of worship,” said Froc.

“It’s a viable argument but not necessarily a winning argument.”

These options that are open to the Trudeau administration are not without their risks. It is the opinion of University of Sherbrooke Law professor Maxim St-Hillaire that, particularly in election season, federal intervention could be “politically tricky.”

St-Hillaire cited the recent passing of much more restrictive laws in Western Europe. These were ruled as proportional restrictions even by higher-level courts. Indeed, he adds, when it comes to historical precedent, there is very little in Canadian or global history that precedes, and would consequently help to justify, the current “radically Liberal Canadian model” of handling religious diversity and freedom.

Professor Froc entertains a similar level of scepticism intoning, “these strategies are not obvious winners… [I]t’s much more appropriate for affected individuals and public interest orgs to litigate this, which is what is occurring now.”

However, because of the nature of the threat the Quebec government has projected onto its society, some maintain that Bill 21 still warrants a strong-handed response from the federal government, no matter the legal and political risks that might be faced down the road. MacEwan University Associate Professor John Soroski is among those less enchanted.

“If a government is going to erase a group of citizens from public participation, I am very passionate and tense about it, and I think that government and its supporters should be exposed to all possible public critique,” countered Soroski whose op-ed in the Calgary Herald was titled “Bill 21 and the moral emptiness of Justin Trudeau.”

“I believe the equality of religious and cultural minorities in Canada now, as in the past, is far too deeply important morally to be put on a shelf because of momentary political reasons…. The hell with a public tranquillity purchased at the cost of allowing bigots the power to erase members of our society.”

In Soroski’s reasoning he stresses that everything considered, it is possible, and maybe in some respects likely, that the current case against Bill 21 fails. Instead of hanging in the wings, the federal government can intervene as it has done in other provinces, most recently in Ontario over the carbon tax.

Moreover, the special privileges Canada provides Quebec, which this year came in the form of a Supreme Court justice pick, are exceptional and, as Soroski sees it, gives the federal government greater reason to expect the province to fall in line with the Canadian consensus.

Other politicians offer their opposition

Like members from the World Sikh Organization of Canada and the Canadian Network of Anti-Hate, professor Soroski is particularly critical of the Prime Minister’s lack of response to this issue. Yet, while other politicians have been only somewhat more forceful than Trudeau (and sometimes less so), none have hinted they would move beyond rhetoric.

For instance, from within Trudeau’s party, two Sikh Ministers—Navdeep Bains and Harjit Sajjan—have spoken out against Bill 21, with Bain’s commenting that the legislation “unfairly take[s] away” a citizen's right to “give back to their communities.”

Parties leaders have also denounced the legislation. NDP leader Jagmeet Singh has voiced his opinion to reporters in Ottawa and has tweeted that “Bill 21 divides people when more than ever we need to come together.” Green party leader, Elizabeth May has said “[r]eligious intolerance of this kind has no place in our society.”

Meanwhile, opposition leader Andrew Scheer explained he would respect the Quebec government's decision, telling reporters “[t]he Quebec government has made a choice.” Scheer maintains that he “would never present a bill like [Bill 21] at the federal level.”

With a response hardly differing from his political opponents, options in action and rhetoric remain open to the Trudeau administration. Of course, avoiding potentially unnecessary tensions in the wake of an ongoing high-profile legal challenge, seems, so far, to be the Prime Minister and his team’s plan of action.