Paul Manfort joined Sean Hannity for an exclusive interview, his first since being pardoned by President Donald Trump, to promote his new book Political Prisoner. 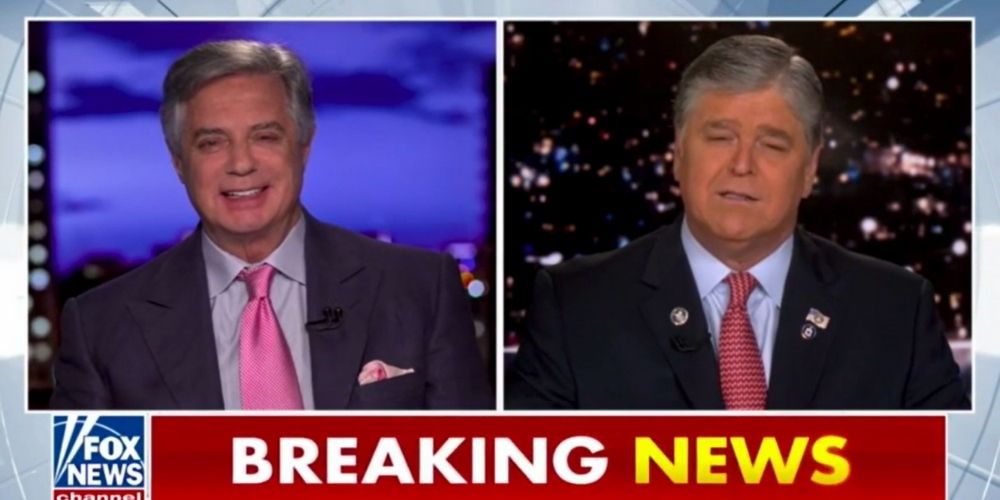 Manfort said regarding the allegations against him. "When things first started to break and the false narrative first started to be promoted in August of 2016, I didn't take it very seriously because I knew how ridiculous it was to even say that there was Russian collusion going on with the Trump campaign."

"But as time went on and as the drum beat got louder and all of a sudden anonymous government sources started putting out stories, which I knew were fake, and got working with social media and the mainstream media to promote this concept that there was serious investigation going on with people around Donald Trump and particularly around, people like me and Roger Stone, I said 'how do I combat this?' I felt like I was in the middle of a tsunami and there was no way my voice was going to be heard against all of this onslaught of misinformation."

"When they did ultimately indict me, they threw a gag order on me and made it impossible for me to speak even though they kept leaking stories that were, have been proven false."

"When I started to really fight against that gag order, they threw me in jail, where they deliberately knew what they were doing. They didn't want me to speak to the media. They wanted to keep me from my lawyers and affect my ability to prepare for my trial."

"From day one, I always felt they were targeting me and a couple of others to try and get at the President or then candidate Trump, which is one of the reasons why I find it sort of ironic that what's going on today with this, these claims about January 6th, when the people who are pushing the January 6th allegations are the very ones who for four and a half years, refuse to recognize the results of the 2016 election."

Manafort told Hannity that "…there were moments that I will talk about this in the book when they were putting pressure on me to admit the facts that were true. And I'll talk about those facts and those expectations and the quid-pro-quo that was understood was that I would be treated in a very lenient way."

"They didn't understand that there… was no way that they could force me into giving up the President. And I never felt uncomfortable talking to them because I knew that as long as I told the truth there, I had nothing to fear."

Manafort said regarding Robert Mueller, "I had no contact with him and frankly, he didn't look like he knew who I was when I saw him."

"They so overcharged me in my case, that Judge Ellis in Virginia actually admonished them from the bench saying, 'Why are you bringing all of these charges? You want to put this guy to jail for forever?'"

"Unless I would cooperate, that was what they were promising to do. And in fact, when we did the presentation and the Virginia DC case, they argued for the maximum penalty for me, because they didn't want me to be free."

Manafort added that "…there was no doubt in my mind from day one that I was a means to an end. And frankly, after they didn't succeed with me, they use the same tactics against Roger Stone. I mean, they did the morning no knock, breaking into his house, just as they did at my house. The only difference was they had a CNN camera there because he lived in an open community, not in a condo. They put the gag order on Roger. They indicted him… not because they cared about either of us, who they cared about was Donald Trump."

"I remember laughing to my lawyer with the plea agreement with them in the Virginia Case, the DC case, that there was all kinds of stories that Donald Trump was going down. I turned to my lawyer and said, 'Make sure they understand. I plan on telling the truth, because when I tell the truth, not only is Donald Trump not going down, but their whole case is going to blow up' and that's what happened."

"It was a weaponization of the law enforcement and national security operations. And. Yeah. In my wildest dreams, I couldn't have imagined this targe targeting a president of the United States, uh, to undermine his presidency and to try and remove him from office. There was no way I was going to ever be a participant in that."