So in the final analysis, Trump is more or less correct: America created the free market environment for amazing technological breakthroughs like the telephone, not just to be realized, but scaled up in a manner that would benefit the masses. 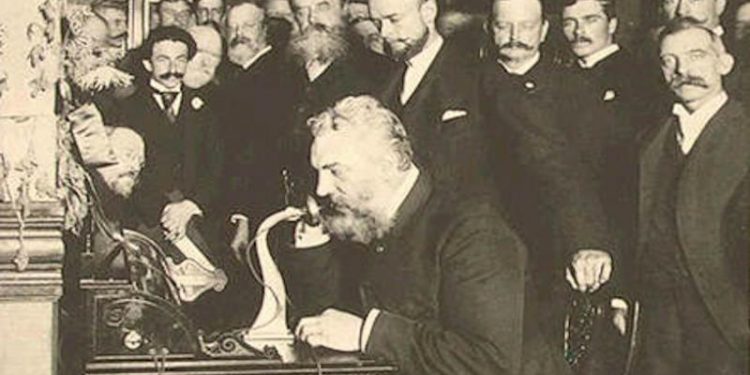 Canadians are pissed at U.S. President Donald Trump, again. The reason: Trump laid claim to Alexander Graham Bell’s telephone as an American achievement during his July 4th speech at the Lincoln Memorial in Washington D.C.

“Our quest for greatness unleashed a culture of discovery that led Thomas Edison to imagine his lightbulb, Alexander Graham Bell to create the telephone, the Wright Brothers to look to the sky and see the next great frontier,” Trump said Thursday.

And the president’s remarks proved the slow news day-fodder of choice for a summertime Friday, as articles about this perceived sleight against Canada filled up social media feeds, exciting the usual peanut gallery participants.

The good news is that because of MSM’s penchant for crudely dissecting everything Trump says, we’re all learning a little more about Bell and our own Canadian history.

Yes, Bell lived in Brantford, Ontario (and died in Cape Breton, Nova Scotia) but he showcased his telephone invention at the first World’s Fair in Philadelphia  – the Centennial International Exhibition of 1876 – had the invention patented in the U.S., but did not become an America citizen until 1882.

Born in Scotland, Bell did some of his exploratory work in Canada as a British subject and ultimately tested a working prototype of his telephone in Brantford, shortly before its big World Fair reveal.

Previous to his Brantford demonstration, Bell had also done significant research on transmitting simultaneous telegraph messages over a single line – work done in Massachusetts and Connecticut, between his teaching duties at schools for the deaf in those states.

Credited with founding The Bell Telephone Company, or Ma Bell as she’s affectionately referred to North of the 49th, it was Bell’s American father-in-law who shored up investors in Boston to start the firm in 1877, as well as a sister corporation, AT&T in 1885.

So in the final analysis, Trump is more or less correct: America created the free market environment for amazing technological breakthroughs like the telephone, not just to be realized, but scaled up in a manner that would benefit the masses.

Parallels can be found with the sport of basketball; invented by a Canadian but embraced by sporty American students at a YMCA training school in Springfield, Massachusetts where Dr. James Naismith unveiled his new game.

Few would dispute that basketball is a Canadian invention because of Naismith’s nationality, despite where his phenom took hold, but if citizenship be the determining metric for ownership, then telephone bragging rights must belong to the Scots.

Given all of this grey area that history abounds in creating, it’s rather amusing to watch people get so worked up by Trump’s purported telephone tale, much as they did when Trump suggested Canada burned down the White House during the War of 1812.

Throughout my elementary, middle and high schooling in Canada, the War of 1812 was taught as a defining moment in our country’s nascent history. Maps of the late-18th and early-19th centuries very clearly label Quebec as Lower Canada and Ontario, Upper Canada. ‘Canadian’ heroes from the war, like General Isaac Brock and Laura Secord are even lionized in bronze at the Valiants Memorial in Ottawa.

So before Trump came along with his blunt insight, few in the entire country disputed any of our War of 1812 history.  In fact, we celebrate it as part of our larger Canadian story, much as we celebrate Alexander Graham Bell and his telephone, which is why reaction to Trump’s pronouncements on either are understandable, yet somewhat at odds with one another.

To prove Trump ‘incorrect’ in his War of 1812 analysis, we must ignore geography and our own protagonists and point to the date of Canada’s officialdom, sealed by our Confederation of 1867.

Indeed, Bell got his idea for harnessing sound waves from pondering Grand River’s current in Brantford and tested his prototype there, but it would take the World Fair’s publicity power and America’s free market to promote, commercialize and then proliferate the technology.

As for the occupation of Washington D.C. during the War of 1812, and the acts of arson that occurred, it was a British force responsible for torching several buildings there in August of 1814, including the White House, or ‘presidential mansion’ as it was called. But the attack was retaliation for the destruction of Port Dover in Ontario, or as it was then referred: Port Dover, Upper Canada.

Adding to ownership ambiguity for Upper and Lower Canada’s victory in this continental conflagration, is that most Canadians who would claim the win today, seem quite content to blame somebody else for incinerating U.S. President James Madison’s residence in its cause.

Regardless, or as U.S. President George Bush Jr. once uttered, irregardless, some-200 years later, Canada and the United States are the best of friends, even if our respective current governments don’t always show it.

Thankfully, our biggest conflicts circa 2019 revolve around trade surpluses and deficits, dumped Asian steel, National Basketball Association title bragging rights, and this latest petty squabble: birthright of a device that has benefited the whole of humanity.

Canada has much worse problems to contend with.