"Our knees went weak and we went down there and stood there and cried," said church member Frances Kilbourne. 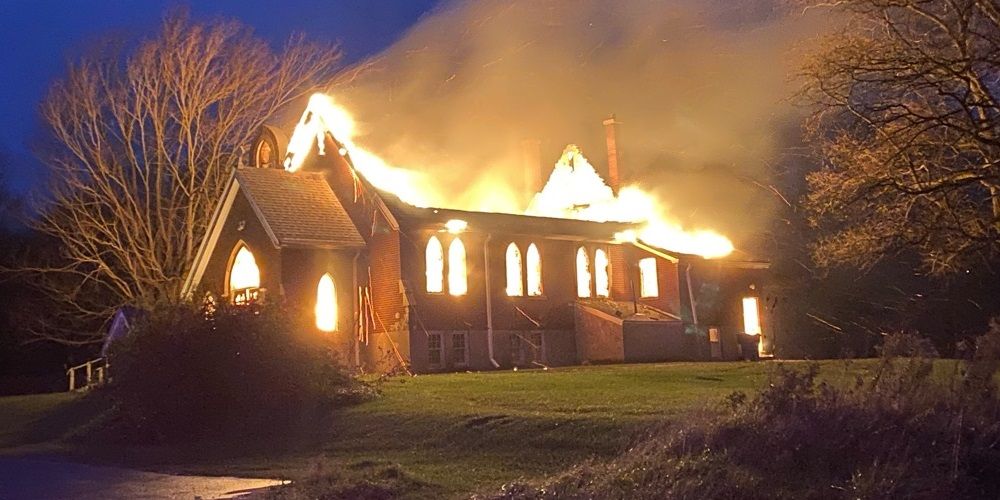 The first fire was reported at the South Caradoc United Church, a historic church in Strathroy-Caradoc, a town in London's census metropolitan area.

The church's congregation dates back to 1868, and organized prayer in the area has taken place since 1850, the church building as it stood until yesterday was 125 years old, being built in 1895.

First responders arrived at the scene at 12:30 a.m. with Strathroy-Caradoc Fire Department deputy chief Joop Devoest saying that "[all] three Strathroy-Caradoc fire departments were utilized, along with tanker shuttle from Delaware and Oneida."

"Our knees went weak and we went down there and stood there and cried," said church member Frances Kilbourne. "From that church comes the impetus to keep this community running."

With arson being considered as a possible cause of the fire, Kilbourne said that if this was the case, whoever lit the fire "had no idea what community and respect and respect for the past, and the heritage was."

Only hours later, the Chippewa Fire Department was responding to its own church fire in Muncey, a First Nations community. St. Andrew's Anglican Church, only seven kilometers away from the church in Strathroy-Caradoc, had been engulfed in flames.

"When we first got on scene it was completely engulfed," CFD Chief Shane Fisher told CTV News. "The roof was already gone and it was more or less putting out what we can. You can't save anything in a fire like this, everything is gone before we got here."

Gerret Keshago Sr., a member of the church, lamented its loss, saying that his "brother and sisters used to go here when they were little. We used to have Christmas mass and put on Christmas plays. I got baptized here, and there is a lot of history behind this old church."

Keshago said he learned of the news while he was on his way to church. He received a call from the reverend informing him that there had been a fire and that there would be no church services.

The fire marshal's office is working alongside the major crime unit to investigate the incident. The Ontario Provincial Police are asking anyone with information on the fires to call them at 1-888-310-1122 or contact Crime Stoppers at 1-800-222-8477.